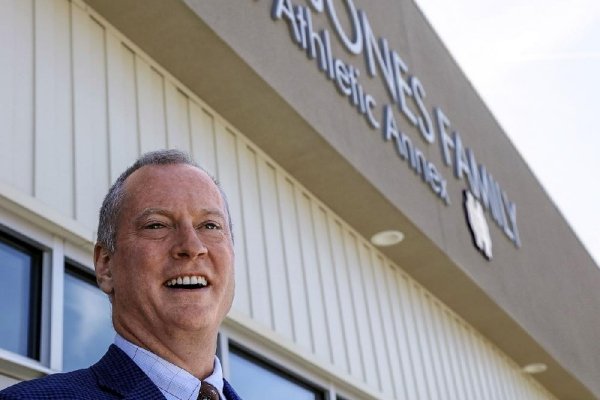 The third in a series profiling the nine newest members of the Arkansas Sports Hall of Fame. The induction ceremony will be held March 29 at the Statehouse Convention Center in Little Rock.

FAYETTEVILLE -- Jerry Jones Jr. went to Washington, D.C., to play defensive back for the Georgetown Hoyas fresh out of Little Rock Catholic High School, but he never lost his passion for his home-state University of Arkansas Razorbacks, or his prep alma mater.

"Well, I bleed Arkansas Razorbacks," Jones said when asked about his football days at Georgetown. "My blood has been Arkansas Razorback growing up and seeing the impact and watching the passion that my father, Jerry Sr., had for it.

NOTEWORTHY Played defensive back at Little Rock Catholic and earned letters as a defensive back at Georgetown (1988-89) as a freshman and sophomore. … Oversees the Dallas Cowboys entire sales and marketing operations, and heads up Dallas Cowboys Merchandising Ltd. … Practiced law for a few years before joining the family business with the Cowboys. … Helped engineer gifts and pledges of $10 million to Little Rock Catholic High School from a group that featured the Jones family, the John York family and a third, anonymous family. … Instrumental in transitioning 65,000 season ticket holders from Texas Stadium into AT&T Stadium. … Played key role in developing the Cowboys’ headquarters at The Star in Frisco, Texas.

"There wasn't a Razorback game that we missed growing up that was played in either Fayetteville or Little Rock."

Now the executive vice president and chief sales and marketing officer for the Dallas Cowboys, the world's most valuable sports franchise, Jones is joining his family members in the Arkansas Sports Hall of Fame as a 2019 inductee.

"I'm just very excited, and what an honor to be put in such a prestigious group of hall of famers," Jones Jr. said. "Growing up there in Arkansas and being a big, avid fan of many of the sports there in Arkansas, especially the Razorbacks, to get to be in the hall of fame with some of those guys, those are things you don't necessarily ever picture or imagine growing up as a kid."

Jones was the point man for a massive financial donation to Catholic High that came from the Jones family, the family of John York, another Catholic graduate who owns the San Francisco 49ers, and a third family, which chose to remain anonymous, between 2013 and 2016, said Catholic High Principal Steve Straessle and a classmate of Jones.

"The three families got together and gave a total of $10 million," Straessle said. "The Jones family was a multi-million dollar gift alone and Jerry [Jr.] really engineered it."

He also serves as general counsel for the Cowboys and has been a primary force in franchise ventures that don't get as much publicity as drafting a Dak Prescott or Zeke Elliot or re-signing a Jason Witten.

He is CEO of Dallas Cowboys Merchandising Ltd., which manufactures and distributes merchandise around the world from its 400,000-square-foot headquarters located near the Dallas-Fort Worth Airport, and he oversees 35 retail locations. The Cowboys are the only NFL team that handles its own logos and trademarks.

Jones also had a strong hand in the design and planning of AT&T Stadium as well as a key role in the development of The Star in Frisco, Texas, headquarters of the Cowboys.

"With Jerry Sr.'s leadership and what he does with our organization, and with my brother and sister and I, we really try as much as we can to take the visibility of the Dallas Cowboys, and the NFL for that matter, and leverage it to impact things we're involved with," Jones said.

"Things like the Salvation Army or being involved there in Dallas with the Independent School District in Frisco, or the health care system of Baylor Scott & White. We continue to look at ways to impact either businesses or the community or anything that is on the initiative of the Dallas Cowboys to use that brand. We constantly have been doing that for decades and will continue."

Jones said the lessons he learned in the family and as a student at Little Rock Catholic are what drives his life.

"It's a credit to my grandparents, who have great Arkansas roots, to my parents, and even credit to Catholic High School," he said when asked what would go through his mind during the induction ceremony.

"I think, with respect to how our family operates, we always know where we started and know where our roots are and know we have dear, close friends throughout the state, especially there in Little Rock," he said. "Every time we get a chance to go back there and visit you feel like you've never left the minute you step on the ground."

Jones Sr. is pleased with the work of his namesake.

"I'm just proud of the work that he has done that has really contributed to sports as it pertains to Arkansas," he said. "I'm very aware of the visibility we have with the Cowboys in the state. And I know that many of the things that he has done have enhanced youth sports.

"I emphasize youth sports and I want to make the point that although we have a point of emphasis in the immediate area of let's say Texas, because we have such a national image or a national brand, everything we do with the Cowboys, in my mind, helps enhance interest in sports. It helps show what good comes from being involved in competitive sports at the amateur level. He's been a big engine in that, does a great job and I'm very proud of it."

Jones Sr. never misses an opportunity to tout the worthiness of youth sports.

"My entire family, and in this case Jerry, have done the same thing. And we're not through yet. With this unique ability we have in the state of Arkansas and beyond ... we can really create interest and create activity among youth in sport."

The Jones family says Catholic High will always play a prominent role in their lives.

"You knew it at the time and you appreciate it more each and every day as time goes by, those four years at Catholic High with Father George Tribou leading the school and the impact he had on my life," Jones Jr. said.

"I have a picture of Father Tribou on my desk and it sits there every day as he looks at me. You don't have a conversation go by that you don't ask, 'What would Father Tribou expect you to do?' I would say he, just as much as my father, those two men influenced me as much as anybody in my life."

Jones will not enter the hall on the strength of his on-the-field achievements alone, but Straessle sees parallels between Jones' athletic endeavors and his contributions to his teams today.