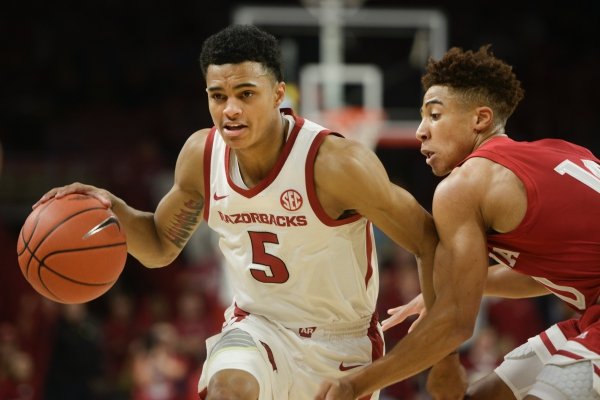 BLOOMINGTON, Ind. -- The University of Arkansas basketball team is playing Indiana at Assembly Hall about eight months earlier than scheduled.

Arkansas will play at Indiana next season as part of a home-and-home series that started this season when the Razorbacks beat the Hoosiers 73-72 in Walton Arena on Nov. 18.

CHALK TALK Arkansas beat Indiana 73-72 on Nov. 18 in Walton Arena when Mason Jones hit the first of two free throws 2.5 seconds to give the Razorbacks a 1-point, then missed the second on purpose to run time off the clock. Daniel Gafford led the Arkansas with 27 points and Isaiah Joe scored 13 points and Jones 11. Romeo Langford led Indiana with 22 … Gafford already has left the team to focus on preparing for the NBA Draft. Langford is questionable for today’s game because of a back injury he sustained in the Big Ten Tournament against Ohio State … The Arkansas-Indiana winner will advance to the NIT quarterfinals and play the Clemson-Wichita State winner.

But Indiana won't have to wait until next season for a shot at revenge against Arkansas.

The Hoosiers (18-15) are getting an unscheduled home game against the Razorbacks (18-15) courtesy of the NIT.

After both teams won their NIT openers Tuesday night when Indiana beat Saint Francis (Pa.) 89-72 at home and Arkansas won 84-72 at Providence, the Hoosiers are taking on the Razorbacks at 11 a.m. today in Assembly Hall in a second-round game of the historic tournament that has been played annually since 1938.

Indiana is playing Arkansas at home because the Hoosiers are a No. 1 seed while the Razorbacks are a No. 5 seed.

"I'm hoping that Archie will treat this as a home and home," said Razorbacks Coach Mike Anderson, referring to Hoosiers Coach Archie Miller. "This is the second part of the series."

Anderson was joking. He knows Miller will be glad to play the Razorbacks at home today and then welcome them back to Assembly Hall next season.

"It's so ironic that we played these guys early in the year and now we're playing them in the second round of the NIT," Anderson said. "Of course, we're having to go up there and play them in their environment. That's going to be a challenge, especially with our young team.

"But at the same time, we're in a tournament and we're playing for a championship and they are as well. So we're looking forward to hopefully playing good basketball."

The Razorbacks know they'll be playing without their leading scorer, while the Hoosiers aren't sure about theirs.

Arkansas sophomore Daniel Gafford, an All-SEC forward who averaged 16.9 points and 8.7 rebounds this season, has declared for the NBA and isn't playing in the NIT.

Indiana freshman guard Romeo Langford, averaging a team-high 16.5 points, missed the NIT opener because of a back injury and it's expected to be a game-time decision whether he plays today, according to the Indianapolis Star.

Gafford had 27 points, 12 rebounds and 4 blocked shots in the Razorbacks' victory over the Hoosiers.

"Obviously their team has changed here in the NIT with Daniel Gafford [being out]," Miller said. "But I think that the one thing that goes unnoticed is how versatile they become without him and how random they become with their offense and their defense. And their pace of play is so fast."

"When you take into account the shooters that they have, and how they shoot the ball from the three-point line, and how they can change up defensively, they really make your team read and react throughout the game," Miller said. "So we're going to have to be really organized in terms of what we have to do defensively and offensively."

"They become way more wide open in terms of the way they attack and shoot the ball from five positions and drive it from five positions," Miller said of the Razorbacks minus Gafford. "Their motion allows them to really move, and it's just one of those things where it's not a very structured game. They're very free flowing."

The Hoosiers, who are 5-1 in their last six games with the only loss 79-75 to Ohio State in the Big Ten Tournament, are led by senior forward Juwan Morgan (15.4 points, 8.3 rebounds per game) and junior guard Devonte Green (9.0 points).

"They're playing real well," Anderson said. "We played them in November, so now we're talking about a game in March. You know they're a much better basketball team.

After the Hoosiers tied their game at Arkansas earlier this season 72-72 on Rob Phinisee's three-point basket with 48 seconds left, Indiana had a chance to win when it got the ball back with after Razorbacks forward Adrio Bailey missed a jump shot with 21 seconds left.

But Phinisee missed on a driving attempt and De'Ron Davis missed a putback attempt.

Jones got the rebound for Arkansas and Davis was called for fouling him with 2.5 seconds left. Jones hit the first of two attempts to put the Razorbacks ahead, then purposely missed the second attempt so the clock wouldn't stop and give Indiana time to attempt a basket that could win or tie the game.

After Jones' second attempt hit the rim, the ball rolled around and when Morgan got the rebound he only had time for an 80-foot heave that fell well short of the basket.

"I think the biggest chore is going to be rebounding the basketball," Anderson said of today's rematch. "The last time we played them I believe they got [two] opportunities to score the last bucket.

"So that means we didn't do a very good job from that standpoint. We were fortunate in that game there.

"They're a much better basketball team than they were early in the year. Hopefully we'll be a different team, especially without Daniel. He had a big game, so it's going to have to be a lot of guys stepping up, really playing good basketball."