Razorbacks rout UAB in second round of WNIT 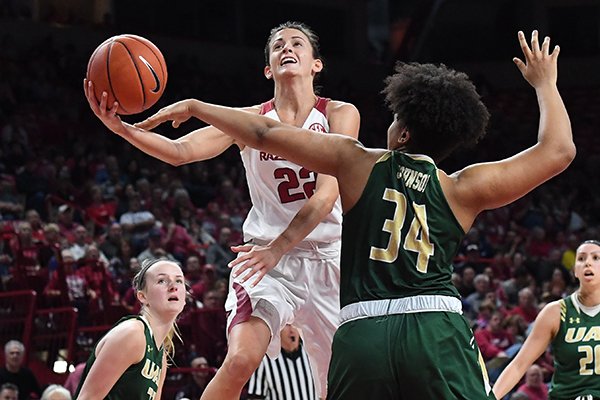 Arkansas' Bailey Zimmerman attempts a shot over UAB's Imani Johnson on Sunday, March 24, 2019, during the second round of the WNIT at Bud Walton Arena in Fayetteville.

FAYETTEVILLE — Arkansas tied a school-record with 15 3-pointers and routed Alabama-Birmingham, 100-52 on Sunday in the second round of the WNIT.

The Razorbacks scored 100 points for the first time since 2016.

Arkansas made 15 of 30 attempts from 3-point range and tied the school record when freshman Grayce Spangler made three in the final four minutes. The Razorbacks previously made 15 against Providence in November 1998.

Arkansas led by as many as 51 points late in the game and trailed only briefly early in the first quarter. The Razorbacks led 52-22 at halftime and 83-35 at the end of three quarters.