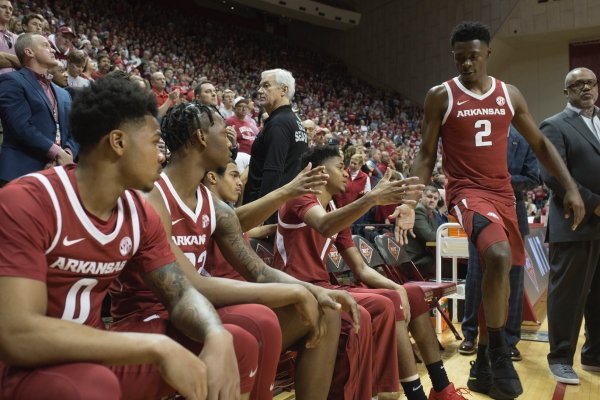 Arkansas Razorbacks players get ready to enter the court before the first half of the NCAA National Invitation Tournament, Saturday, March 23, 2019 at the Simon Skjodt Assembly Hall at the University of Indiana in Bloomington, Ind. The Arkansas Razorbacks fell to the Indiana Hoosiers 63-60.

BLOOMINGTON, Ind. -- Six times prior to this season University of Arkansas Coach Mike Anderson was a player, assistant coach or head coach with teams that played in the NIT.

In each case, those teams played in in the NCAA Tournament the next season.

The Razorbacks hope to make it 7 for 7 for Anderson's teams after playing in the 2019 NIT.

"Those other teams went to the NIT and they learned from it and they got a lot better and then they made the NCAA Tournament," Arkansas freshman guard Isaiah Joe said. "I feel like we can do the same thing."

Arkansas ended its season with an 18-16 record when Indiana beat the Razorbacks 63-60 on Saturday at Assembly Hall in a second-round NIT game.

"In the NIT we're playing for a championship just like in the NCAA Tournament, so we tried to do everything we could," said freshman guard Desi Sills, who led Arkansas with a season-high 18 points against Indiana. "We came up short, but it's a learning experience.

"We'll come back and work hard in the offseason to be better."

The Razorbacks won 84-72 at Providence in their NIT opener and took the Indiana game down to the final possession when sophomore guard Jalen Harris' last-second shot from about 38 feet hit the backboard and bounced off the rim.

Arkansas accepted an NIT bid after losing to Florida 66-50 in the SEC Tournament.

"You think about what we just did," Anderson said. "Obviously coming off of a disappointing season, we had a chance to have a new life in the NIT.

"And with this type of team -- whether it be more practices or games -- it's going to be so instrumental in your development. Because you're developing their mindset of playing for a championship.

"To go to the Big East and win at Providence that's going to pay big, big dividends. Then coming here to a hostile environment at Indiana -- and they're playing much better than they were earlier in the year -- that signals to our guys we can play with anybody."

"Just get a little more seasoning, get a couple more pieces to go with what we've got, we will be better. I do know that."

The Razorbacks, who didn't have any seniors this season, played in the NIT without Daniel Gafford, their All-SEC sophomore forward who declared for the NBA Draft on Monday.

Anderson was a starting junior point guard on Tulsa's 1981 NIT championship team led by Coach Nolan Richardson. The next season, the Golden Hurricane made the NCAA Tournament.

Then Anderson was a volunteer assistant for the Golden Hurricane when they went to the NIT in 1983 and the NCAA Tournament the next two seasons.

In Anderson's first season as a head coach, he led Alabama-Birmingham to the NIT. The Blazers then had three consecutive NCAA Tournament appearances under Anderson.

When Anderson returned to Arkansas as a head coach, the Razorbacks' first postseason appearance was in the 2014 NIT. They played in the NCAA Tournament in 2015, 2017 and 2018.

"These games obviously gave guys a blue-print of what's in store for this team," Anderson said of going 1-1 in NIT games on the road this season. "We know we've got to get better."

Anderson said SEC road games as well as playing at Texas Tech helped prepare the Razorbacks for a raucous crowd at Indiana announced at 12,225.

"Our guys weren't intimidated," Anderson said. "With all the adversity that has taken place with this team [not having Gafford], I think they hung in there together. They held their poise down the stretch."

Arkansas went 6-8 in games decided by four or fewer points or that went into overtime.

"We were in most every game we played this year," Anderson said. "So we'll use going through that and hopefully we'll gain from that experience so can win more of these kind of games. We've been in enough of them."

Anderson said the Razorbacks will spend plenty of time in the gym in the coming months after taking a break.

"The lab, that's what we call it," Anderson said. "The lab will be open. I think it'll be a great offseason.

"But right now I want them to get away from [basketball]. We've been going at it since the first of June. Now these guys get a chance to hopefully catch their breath and catch up in school. There's a month-and-a-half of school left, and so they need to finish up strong."

Joe said it's disappointing the season is over, but that the NIT helped the Razorbacks.

"A lot of people don't get this opportunity to make it this far," he said. " To fall short in the NIT at Indiana -- against a really good team -- I think we learned a lot from it.

"Our season ended short of what we wanted it to, but we can't go back in the past and change the game. We've just got to move on from here.

"Go into the offseason with our heads held high. Work hard, get better individually and grow as a team. If we do that, I think we'll see great things to come in the future."