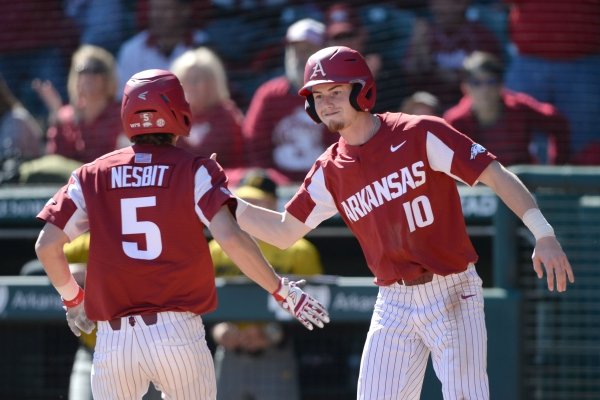 Arkansas Missouri Saturday, March 16, 2019, during the inning at Baum-Walker Stadium in Fayetteville. Visit nwadg.com/photos to see more photographs from the game.

The Razorbacks (20-4), who moved up one spot to No. 8 in Monday's USA Today Coaches Top 25 poll, will have to defeat struggling Missouri State on the road in Springfield, Mo., to do it.

"Obviously a road series victory in the SEC is hard to get so we're just glad we did it," Arkansas Coach Dave Van Horn said.

The Razorbacks are not likely to go more than a couple of innings with any pitchers against the Bears (5-16), and weekend starter Connor Noland is on tap to get some work.

"It's an important game for a few of our pitchers to get on the mound and kind of get it going a little bit," Van Horn said. "We're going to break it up, probably throw four or five guys: Wicklander, Connor Noland might get an inning.

Noland (0-1, 4.70) is coming off his worst outing after allowing 3 earned runs on 3 hits and 2 walks, with no strikeouts, in 1 2/3 innings of a 10-0 loss at Alabama. Wicklander, the normal mid-week starter, faced three batters in the same game, walked them all on 16 pitches, and all three came around to score.

"That's one reason we want Wicklander to throw an inning [tonight]," Van Horn said. "He didn't throw real well at Alabama. Threw well on Tuesday night against Texas. But also Connor. We feel like he needs to get out on the mound, pitch, and hopefully have some success, build some confidence."

Veterans Dominic Fletcher and Heston Kjerstad had strong weeks at the plate, as did third baseman Jacob Nesbit, who was named the SEC freshman of the week on Monday.

Fletcher is 9 for 23 (.391) with two home runs and five extra-base hits during the five-game road trip. The junior, who has a perfect fielding percentage, pushed his average to .303 with a 3 for 5 performance on Sunday, including his fourth home run.

Kjerstad is 9 of 26 (.346) in his last six games with two three-hit games in the Arkansas victories at Alabama.

Casey Martin had two hits, including a leadoff home run for his team-high fifth, on Sunday to post his first multi-hit game since March 13. The sophomore shortstop is hitting .243 with 19 RBI and a team-high seven errors.

"I think our offense seems to be picking up," Van Horn said. "We faced some pretty good arms in Austin and we handled them pretty well. In four out of the five games I think we swung the bats pretty well. It's good to see those veterans starting to kick it in.

"Even Martin, who has had a tough stretch, led off the game on Sunday with a home run and got an infield single and actually lined out a couple of other times in the series. We feel like he's starting to get it going too, so it's been a big plus, just taking some pressure off of our pitchers."

The Bears are struggling in all facets for 37th year Coach Keith Guttin. Opposing teams are hitting .302 against them, nearly 100 percentage points higher than their own .206 batting average. They've also been the bad news Bears in the field, with a .955 fielding percentage that ranks No. 255 in the country.

"They've gotten off to a tough start," Van Horn said, referencing injuries to a couple of key players. "They've played an extremely tough schedule. I think it's just kind of snowballed. It happens every now and then, as we found out in 2016 when we couldn't flip it around. But it's still early in the season.

"It's still Missouri State. They're a proud program. They've gotten off to a tough start, but I feel like their mantra right now is 'Hey, let's get through Tuesday, conference starts this weekend and let's start the season over.' "

The programs traded gut-punch postseason outcomes in 2015 and 2017. The Razorbacks eliminated Missouri State 3-2 in the finale of a three-game NCAA Super Regional in 2015 at Baum Stadium, while the Bears knocked Arkansas out with a 3-2 victory in the Fayetteville Regional finale in 2017.

Arkansas took last year's lone meeting 11-7 at Baum Stadium on April 17 as Martin and Kjerstad both homered and drove in four runs and Kole Ramage picked up his first college victory with 1 2/3 hitless innings of relief.