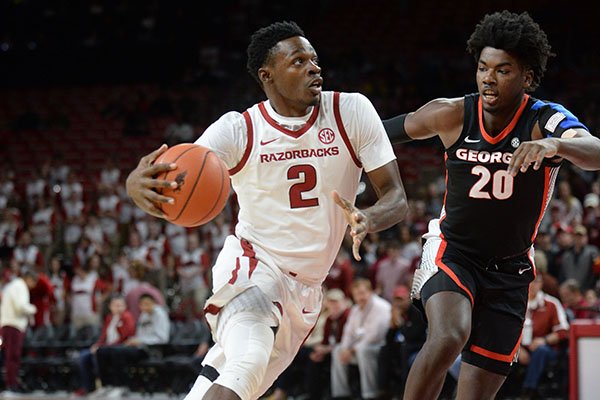 Arkansas forward Adrio Bailey (2) drives to the basket as he is guarded by Georgia forward Rayshaun Hammonds (20) Tuesday, Jan. 29, 2019, during the first half of play in Bud Walton Arena.

The third in a nine-part series reviewing Arkansas basketball in 2018-19.

• Decent rim protector. In the final minute of Arkansas' season opener against Texas in El Paso, I watched Adrio Bailey make one of the more impressive blocks I'd seen in person to that point. A smaller Longhorns guard brought it weak in the lane and attempted to toss up a soft floater over Bailey, but he wasn't having it. The block was so vicious that the ball quickly landed in the lap of another Texas player ~10 feet away and he wound up with free throws after challenging Bailey again. Bailey, though, sent a message that he at least had to be accounted for at the rim as a defender.

Bailey finished the 2018-19 season with a block rate of 3.51 percent, which ranked 23rd in the SEC ahead of conference notables such as LSU's Naz Reid and Emmitt Williams, Georgia forward Derek Ogbeide and Kentucky's Reid Travis. Bailey, Williams and Auburn's Malik Dunbar are the only players in the league to rank in the top 30 in block rate at 6-foot-6. He blocked at least two shots in seven games this season, granted four of those games came in the first nine of the year. Over the final five games, Bailey blocked six shots and became more a bit more active at the rim defensively.

• Energy. There was certainly a reason Mike Anderson started Bailey 26 times as a junior, and it wasn't just because he was the team's lone upperclassman. Bailey is one of the blue-collar players Anderson so often talked about needing on his roster who were integral to his teams having success. Bailey, despite being solid on the offensive end in high school in Louisiana, hasn't been a scorer in college, but what he can bring is defensive intensity, energy, whether in the starting lineup or off the bench as he did for six games late in the season, and athleticism as an undersized forward.

Bailey was at his best when slashing to the rim and working himself open on the offensive end and diving into the lane as the trailer in transition. The best example of this came against Florida when Bailey rejected a Gators layup at the rim then trailed the play going the other way. Once across halfcourt, he set up his matchup as if he were going to set a screen for a teammate away from the play then cut hard to his left, where he received a pass along the lane line and finished with a layup. Also, against LSU in Bud Walton Arena in January, he added eight points, including six in two-plus minutes to pull Arkansas back into the game after falling behind by as many as 13 in the second half.

• Flashes of a jumper. Early on in Arkansas' season opener in El Paso, Bailey was isolated deep in the left short corner and appeared to be calculating his next move. Somewhat quickly, Bailey rose up and knocked down a long 2 to give Arkansas a 15-14 lead. It was Bailey's first shot of the year and it set the tone for a strong November individually. He knocked down 9-of-14 midrange jumpers in the first five games and also added the first 3-pointer of his career. For the month, he hit better than 70 perfect of his 2-point shots - far and away the best figure of his career. More on Bailey's jumpshot in the next section.

• Finishing at the rim. Bailey scored in double figures in five of Arkansas' first seven games this season, then, following the Razorbacks' dominant win at Colorado State in which he finished with 10 points and eight rebounds, Bailey struggled mightily for the next month. From the Western Kentucky game through the first meeting with Missouri in Fayetteville, he was 15-of-55 (27.3 percent) from the floor and seemed to be clearly snakebitten around the basket. Dunks went halfway down and rattled out, chippies rolled off the rim, you name it.

For the season, according to shot chart data collected throughout the season with the exception of the Texas-San Antonio game in North Little Rock, Bailey finished 67 percent of his shots at the rim and 16-of-19 dunk attempts. He also hit 60 percent of his shots in the painted area. His struggles in the lane prevented him from scoring in double figures over the final 27 games of the year.

• Inconsistent jumper. Following his sizzling start shooting the ball in November, Bailey's jumper cooled off considerably the remainder of the season. As mentioned before, he made 9-of-14 2-point jumpers in November, but knocked down just 14-of-52 (27 percent) the rest of the way. His midrange game was most effective on the left side of the floor, hitting 43.5 percent compared to 31.6 and 29.2 percent between the elbows and right side of the floor, respectively. On all jumpers, Bailey shot 44.4 percent on the left side of the floor and struggled most - 24.1 percent - on the right side.

Not to belabor the point, but Bailey also had a tendency to take long 2s, which aren't exactly an efficient shot. He made 8-of-22 such jumpers - 36.4 percent. Five of the eight makes came on the right side of the floor.

• Could be better on the glass. Despite his offensive numbers at the rim and in the lane, Bailey has the ability to be a very explosive player and display some freaky athleticism. It hasn't, though, always resulted in him being a consistent rebounding forward. For his career, Bailey has averaged more than four rebounds per game in a month just once. And according to HoopLens, Arkansas allowed opponents to grab 37.3 percent of their misses with Bailey on the floor - the highest mark among the Razorbacks' regular forwards.

Best Bailey quote: "A lot of long nights, staying up till 3 o’clock in the morning, 4 o’clock in the morning, just knowing that they’ve got parties going on but you’re making those sacrifices, just staying in the gym and working on your game and working on my craft. I want to play this game for as long as I can can play it.” - Bailey after scoring a career-high 20 points against UC-Davis in November.

Best quote on Bailey: "The more he lets the game come to him, I think the more he’s going to have an opportunity to shine." - Mike Anderson on Bailey averaging a career-high 11.2 points in November