Anderson leaves program in better shape than he inherited it 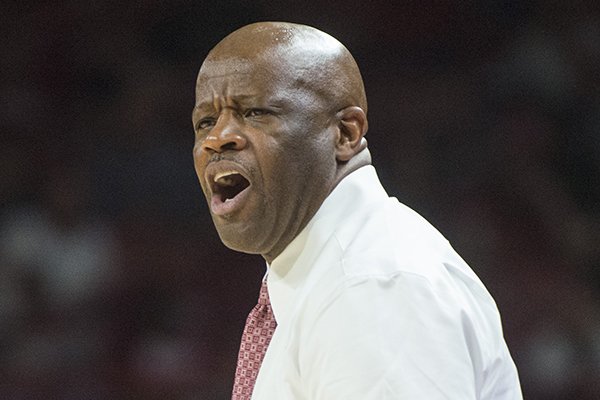 Although I have never been invited to join the high IQ society Mensa and at 55 I'm not as sharp as I once was, I do have a vivid memory of handing keys to Mike Anderson to enter his office when he arrived in Fayetteville as an assistant coach in 1985.

Along with secretary Terri Mercer and athletic trainer Dave England, I was one of the three staff holdovers that made the transition from working for former Arkansas basketball coach Eddie Sutton to then new Razorback hoops boss Nolan Richardson.

Sutton and Richardson are two Hall of Fame coaches that will always be father figures to me in that they helped continue what my late dad, Ben, and grandfather, Oscar, started in turning me from a boy into a man.

Coach Anderson was more of a friend to me, in large part because he was less than four years older than me.

That being said, I would always call him Coach Anderson instead of Mike because of the respect I had for him from Day One.

He would go on to become a neighbor of mine a few years later as I began my career as a sports writer and he and his wife, Marcheita, were of great support to my late wife Laura and I when she was diagnosed with breast cancer in 1996.

That duo has also been wonderful to my former Newport High School sweetheart and current wife, Petra, and welcomed her back to Arkansas with open arms when she re-entered my life 11 years ago.

I will always think of him as a great man first and a basketball coach second and have no hesitation in saying that he is one of the finest human beings I have ever been around.

He has always been a man of character and represented this state and this university in a classy manner, something he continued to do Tuesday in a video to the fans after he was fired.

The pain and disappointment on his face was very evident in the realization that he was no longer going to be part of the basketball program in Fayetteville as he had been for 25 of the last 34 years.

I felt a great deal of sympathy for him watching that because I know how much he cared and how much he wanted to get Arkansas back to the glory days of the late 1980s through the mid-90s.

Coach Anderson ends his tenure at Arkansas by going to three NCAA Tournaments and two NIT tournaments in eight years and has been to nine NCAA Tournaments, two Sweet 16s, one Elite Eight, 12 overall postseason appearances and has had 11 20-win seasons in his 17 years as a head coach.

People above my pay grade make decisions on whether he won enough in his time here and what expectations they have for him to keep his job.

I also don't believe it is journalistically ethical for a beat writer like myself to take a position whether a coach in any sport should be fired solely based on his record.

That decision was obviously made Tuesday as Arkansas athletic director Hunter Yurachek made an announcement that he had decided to move in a different direction because the current staff had "not sustained a consistent level of success against the most competitive teams in the nation to enable us to compete for SEC and NCAA championships on an annual basis."

Perhaps Coach Anderson's greatest achievement during his time as coach was improving the culture in the program off the court.

Dana Altman ran from here kicking and screaming in April 2007 after just 26 hours on the job. While his family was part of that decision, it also had to do with what Altman found was going on off the court.

Whoever is named the next coach here will be aided by what Anderson did during his tenure, and I can think of no reason Arkansas should not land a top-notch replacement.

The facilities and the resources needed to succeed are here, and the fan base -- while sometimes fickle as many are -- is supportive. Arkansas is in the top 10 nationally in attendance on a regular basis.

It is always going to be about getting enough talented Jimmies and Joes (or Bobbys and Daniels) here as much of, if not more than, Xs and Os.

That should be a big factor for the guy that comes in next.