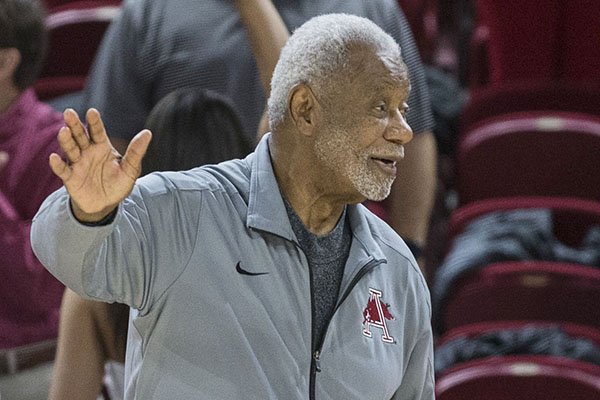 FAYETTEVILLE -- Nolan Richardson said he was sad, not angry, when Mike Anderson -- his former point guard at Tulsa and assistant coach at the University of Arkansas -- was fired Tuesday as the Razorbacks' basketball coach.

"I was more sad than anything," Richardson said Wednesday. "Was I disappointed? Yeah. But was I surprised? No. That's just the nature of the beast.

"As I've said to Mike before, 'We're hired to be fired.' Then you move on. That's basically the name of the game with everybody in coaching."

Anderson had a 169-102 record at Arkansas with three NCAA Tournament appearances and two NIT appearances.

"I don't know what the time limit is on coaches and what they have to do in order to show that they deserve to stay in a job," Richardson said. "I guess it's different for different schools, different athletic directors, different board members.

"It's just something where we [as coaches] have to do the best we can to try to keep our players and do a good job of recruiting and run our program the right way. I thought Mike tried everything he could at Arkansas. He worked extremely hard in all those departments."

Arkansas' administration and fans were hoping Anderson could return the Razorbacks to that elite level -- especially after he led Alabama-Birmingham to the Sweet 16 in 2004 and Missouri to the Elite Eight in 2009 -- but his Razorbacks went 2-3 in the NCAA Tournament and never advanced past the second round.

"We created a monster, and you've got to feed it," Richardson said. "If you run out of food, the monster comes to eat you, because he's hungry. That's what's happened to Mike. The bar is set so high."

Anderson left a loaded Missouri team -- which went 30-5 during the 2011-12 season under Frank Haith, its first without Anderson -- to take over an Arkansas program that had made three NCAA Tournament appearances the previous 10 years.

"[The Razorbacks] were in a bad hole, and the first thing Mike had to do was dig them out of it," Richardson said. "You're constantly trying to dig and while you're digging, the guys that you hope can be around to help you, they're gone."

Sophomore Bobby Portis and junior Michael Qualls led Arkansas to a 27-9 record and its first NCAA Tournament under Anderson in 2015, but both left after the season to enter the NBA Draft.

"If Portis and Qualls had stuck around another year, Arkansas could have easily been a Sweet 16 or an Elite Eight team," Richardson said. "But it didn't happen.

"You're trying to stay ahead of the posse, and sometimes you just can't do it."

Jacorey Williams, who was dismissed from the team by Anderson, became the Conference USA Player of the Yyear at Middle Tennessee State.

Darious Hall and C.J. Jones, who would have been in the rotation this season, transferred to DePaul and Middle Tennessee State, respectively, after last season.

"I can see Mike being here eight years, but I can also see some of those years where he was struggling, trying to get out of the hole again," Richardson said. "Then once he got out of the hole, sometimes he was put back into it. So it's a constant fight."

Richardson said he hoped Anderson would get a chance to coach the Razorbacks again next season after a team without seniors went 1-1 in the NIT -- winning at Providence 84-72 and losing at Indiana 63-60 -- to finish 18-16.

Arkansas played in the NIT without All-SEC forward Daniel Gafford, who declared for the NBA Draft.

"I thought maybe next year with another player or two added onto the group Mike had coming back, we could have been a lot better," Richardson said. "It would have been a show-and-tell year. But apparently the higher-ups didn't think that way."

Richardson said he spoke with Anderson on Tuesday night.

"You won't find a better person than Mike," Richardson said. "I think he'll move on from this.

"Whether he's going to coach again, that I wouldn't know. Sometimes you have a pretty sour taste in your mouth when you leave a job. But then after a while it hits you, 'Hey, I enjoy doing this too much to let it go.' "

"Mike's really not that old compared to some of the other guys still coaching," Anderson said. " I think personally that Mike may show up again doing some coaching."

Richardson said Anderson's firing hasn't affected his attitude about a resolution from the Arkansas administration -- submitted to the UA board of trustees for its consideration -- to have the Walton Arena court named in his honor.

"When I got into coaching, it was the for the purpose of being the best I could be and better than most," Richardson said. "But if the fans, the students, and everybody feels like that's what they want on that floor, I'm not going to stand in the way and say, 'No, I don't want that.'

Richardson, who stayed away from the Arkansas campus and basketball program for six years after his firing with one regular-season game left in 2002 that resulted in his lawsuit for racial discrimination, had a reconciliation with the UA when the 1994 team was honored in 2009.

After Anderson was hired as the Razorbacks' coach, Richardson began attending games in Walton Arena on a regular basis.

"No matter how you slice it or dice it, I spent 17 years at Arkansas," Richardson said. "That was 17 years of my life and hard work.

"I don't care who takes over the program, I'm going to support him. In my heart, I'm always going to be a Razorback."