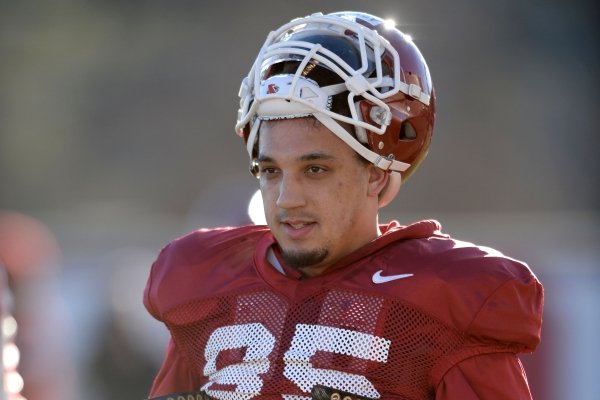 FAYETTEVILLE -- There were no natural tight ends on the SMU roster when Ben Hicks jumped aboard with Chad Morris and staff in Dallas in 2015.

Now, with Hicks having transferred to the University of Arkansas for Morris' second season with the Razorbacks, he's swimming in an offense teeming with tight end talent.

Analysis The Razorbacks have established a reputation for churning out NFL-level tight ends with Mackey Award winners D.J. Williams and Hunter Henry joined by standouts such as Chris Gragg, A.J. Derby and Jeremy Sprinkle. The same approach to using tight ends in the passing game has carried over from the Bielema era to Chad Morris’ system, with position coach Barry Lunney Jr. spanning both staffs. O’Grady has a chance to be one of the best tight ends in the nation, while Gunter’s upside is tremendous if he can stay healthy. The coaching staff likes the physicality of the more block-heavy guys on the roster. The addition of legacy signee Hudson Henry will help the Razorbacks boast quality depth at the spot once again.

"They're extremely, extremely talented," Hicks said Tuesday. "I think all of them have their own kind of set of skills. It's different. At SMU, we had a lot of really good blocking tight ends. Here, I think these guys are really good receiving tight ends. I just think that brings another element to the passing game."

Cheyenne O'Grady, a Fayetteville product, led the Razorbacks with six touchdown catches, tied for the team lead with 30 receptions and was second with 400 receiving yards last year.

O'Grady is back as a senior to lead the position group, which will get a prime addition this summer in Hudson Henry, a legacy signee from Pulaski Academy in Little Rock who was rated as the top prospect in Arkansas by some services.

Morris and offensive coordinator Joe Craddock were not used to featuring tight ends in the passing game in the years at SMU, but they gladly incorporated last year's bunch into the schemes. The most prominent of the offensive plans played out against Alabama, when the Razorbacks completed 10 passes to O'Grady, Austin Cantrell and Grayson Gunter for 79 yards. O'Grady had touchdown catches of 8 and 3 yards as Arkansas racked up 233 passing yards and 405 total yards against the No. 1 Crimson Tide.

"If I'm not mistaken, I think we targeted the tight end more than any team in the country this past year," Morris said. "The role they have on this football team allows us to play fast and allows them to be part of the running game and passing game."

O'Grady has fought through some issues with immaturity to enter his final season as one of the most prominent Arkansas skill players.

"I want to pick up right where I left off," O'Grady said prior to spring break. "I did have a pretty good season and I want to ... hopefully expand my game even more. Coach Morris really helps me with that as well as coach Craddock and coach Lunney."

The Razorbacks lost a pair of contributors from a year ago in nine-game starter Austin Cantrell, who retired from football to begin his professional career and family, and Jeremy Patton, who started one game and was lost for the year with an ankle injury suffered in a 24-17 loss versus Texas A&M on Sept. 29. Cantrell and Patton had combined to start 26 games the past two years.

Junior Grayson Gunter has shown flashes of top-shelf talent but also has been injury prone. A toe injury prior to spring break has slowed him a little heading into the last half of spring drills, as he was in a green (limited participation) jersey on Tuesday.

The coaching staff moved a couple of veterans -- Hayden Johnson and Chase Harrell -- to the position to supplement walk-ons Blake Kern and Trey Purifoy.

"Moving Chase to tight end, it's amazing sometimes when guys move positions and to see the success he has had this spring," Morris said. "He's had as good a spring as anybody. I know coach Lunney is excited about Chase. He has gained some weight, looks good and runs good routes. I tell him all the time when I see him, 'You look like you're at home now.' "

Henry is expected to have a chance for early playing time.

"I expect Hudson to come in here and contribute quickly," Morris said. "I do think we've got a good mix [at tight end]. I really like the room."

Morris said he has been very impressed with Kern's physicality as an in-line blocker at tight end.

O'Grady, called C.J. by his teammates and coaches, has been issued the same kind of challenge Morris has posed to standout defensive tackle McTelvin "Sosa" Agim: To consistently be the type of cut-above player they aspire to be.

"C.J., we know what he's capable of doing," Morris said. "C.J., much like Sosa, the challenge is consistency. You come in here and tell me you're an All-SEC type football player. But can you practice like it, can you consistently, day in and day out, prepare yourself to be that? Because this position on this football team will allow that to happen if you prepare yourself for that."

O'Grady understands where he must improve to have a shot at the NFL level.

"It's the same thing, blocking," he said. "Blocking has always been where I struggle, and here at the college level, route running is really detailed as you get older.

"I'd say I struggle getting to my depth on certain plays and reaching the right yard line and breaking my route at that time. Just little things like that. Then blocking, staying low, bringing my feet -- I like to stop on contact -- so I just need to keep working in those areas. When it all comes together, it'll make me the best I can be."