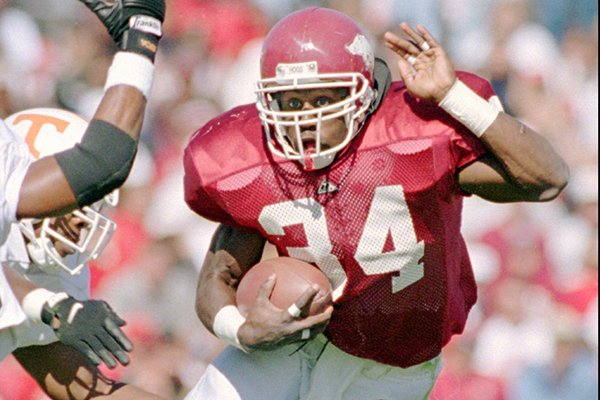 The ninth in a series profiling the nine newest members of the Arkansas Sports Hall of Fame. The induction ceremony will be held tonight at the Statehouse Convention Center in Little Rock.

Madre Hill had the makings early in his football career for future enshrinement into the Arkansas Sports Hall of Fame.

Folks in Arkansas got their first hint when he earned the Gatorade Arkansas player of the year award as a senior at Malvern High School in 1993.

Hill made a major down payment on his eventual induction on Sept. 9, 1995, the day he accounted for a school-record six touchdowns and rushed for 178 yards in a 51-21 rout of South Carolina as a sophomore. He ran for a then University of Arkansas single-season record 1,387 yards that year and helped lead the Razorbacks to their first SEC West title in their fourth season in the mighty SEC.

Hill surely clinched it when he wrapped up his collegiate career in 1998 with 2,407 rushing yards, fourth on the Arkansas career rushing chart at that time.

Between his breakout season in 1995 and his 669 rushing yards in 1998, Hill had reconstructive surgery on both of his knees. He gave up his body for the Razorbacks and still went on to have a professional career that ended with the Oakland Raiders in 2002 after a loss to Tampa Bay in the Super Bowl.

“When I think of the Arkansas Hall of Fame, I think of an award that is based on your whole life of work,” Hill said. “To look back to when I first started in pee wee and fell in love with the game up to the day I walked off the field at the Super Bowl and to be received for all that by your home state it really means a lot.”

Hill’s open personality made him a favorite of fans, teammates and the media during his Arkansas career.

He never lacked for confidence.

“I would like Arkansas fans to think of me as the most impactful player that has ever played at the University of Arkansas,” Hill said, before attaching further perspective to that request.

“When you think about my career, you’ve got to think about where Arkansas was. Fired Coach [Jack] Crowe [in 1992] because he lost to The Citadel. Arkansas was now a basketball state after winning the national championship in 1994.

“Football was non-existent. We were completely off the map. Coach [Danny] Ford comes in and out of nowhere we got to the SEC Championship Game and do all these things. If you measure the play of anybody … I was the most impactful.”

“Madre was a beast,” Lucas said. “He was very fast, was good people and he had a great heart.”

Said another ex-teammate Marvin Caston, “Madre was brought up and meant to be a Razorback.

“He loves the University of Arkansas and he loves the Razorbacks. He and his wife Jennifer both, she’s an alumnus, … they’re a great team.

“Madre is a great person and always has been. His athletic ability speaks for itself, but I just hate he got hurt. … He was a phenomenal running back, man.”

Hill played played pro football for four years after being drafted by the Cleveland Browns in 1999, finishing up on the Raiders Super Bowl team.

A big part of the Hill story as a football player involves his return from the surgeries on his knees. During his time in the NFL, it was a rare feat to overcome injuries to both knees and still be a productive professional.

“I was one of very few NFL players to do that,” Hill said. “One of the others was Priest Holmes, and I think Terry Allen did it as well.”

Lucas said Hill’s commitment to his recovery was an inspiration to him.

“He hurt one knee in the SEC championship game, and he came back and tore it again on his other knee and he fought back,” Lucas said. “That spoke volumes about him and the type of person that he is and how he worked to overcome that and get a chance to play on the next level too.

“It was truly a blessing for him. Madre did work extremely hard. He really loved the game. He did everything right.”

Hill’s two healthy seasons at Arkansas after his freshman year resulted in the school’s first SEC West title and a co-championship in 1998.

Arkansas Coach Houston Nutt inherited a talented roster in 1998, including Hill after two seasons of major rehabilitation. He said Hill was one of the first players in his office after he landed the job.

“I knew a lot about Madre coming out of high school, and I knew he was a very talented back, but with the surgery and all that, I just didn’t know how effective he would be,” Nutt said. “But I remember he was so bright-eyed and ready to go. He really wanted to contribute.

“I remember on the first day of practice we ran a draw and he out-ran a couple of people and I said, ‘Wooo, looks like Madre may be back.’ So we got real excited. He had a really solid year for us. We had a great group of players that first year and Madre was one of them.”

Hill split prime time at tailback with Chrys Chukwuma that season, when the Razorbacks opened 8-0 and rose to No. 10 before suffering a heartbreak loss at No. 1 Tennessee, the eventual BCS national champion.

Caston’s top memories of Hill were his resolve to come back in 1998 and his response to Coach Danny Ford prior to the South Carolina game in 1995 after the Razorbacks opened with a loss to SMU.

“I remember Danny Ford challenging him before the South Carolina game,” Caston said. “Just challenging him to step up and be the running back he recruited him to be. And of course he goes out and scores six touchdowns. … He wanted to be the best.”

Hill laughed when asked about Ford’s challenge to him.

“Coach Ford said something to me quite a lot of times,” Hill said. “But yeah, that was one of the games that he really wanted to I guess make the statement that we’re only going to go as far as you take us. He did it in typical Coach Ford fashion.

“Yeah, he was a hard-nosed Bear Bryant throwback coach. He showed love by putting a lot on your shoulders. I came from Coach David Alpe down in Malvern, so I was used to that.”

The induction ceremony will have a distinct Malvern flair, as Alpe, the long-time Leopards coach and athletic director, is also going into the hall.

Hill compared the 1995 Razorbacks with the current state of the program.

“We were coming off a bad season from the year before,” he said. “Arkansas was kind of on the rebound, sort of like we are right now. No one was expecting anything from the University of Arkansas. We had an extremely young team. I was able to come in and contribute … and everything kind of clicked during that [South Carolina] game, which was our second game. And from then on, it propelled us to the SEC championship.”

Hill tried his hand at college coaching between 2004 and 2006 before diving into business. Now he’s the owner of RazorClean Inc., a management contracting and supply company that operates in eight states.

“I’m a married man with four kids ranging in age from 15 to 6, so I’m either working or at a baseball game,” Hill said with a laugh.

Madre Hill at a glance

Star athlete at Malvern High School (1990-93), where he finished his career with a then-state record 6,010 rushing yards and 68 touchdowns. … Hill earned Gatorade Arkansas player of the year honors, USA Today All-America and Reebok national player of the year recognition as a senior, when he rushed for 2,863 yards and led Malvern to the Class AAA state championship. … Rushed for a school-record six touchdowns in a 51-21 victory in the Hogs’ 1995 SEC opener against South Carolina. … Ranks 10th at Arkansas with 2,407 career rushing yards, and fifth in a single season with 1,387 yards in 1995.… Fought through surgeries on both knees to rush for 2,407 yards at Arkansas. … Named to UA All-Decade team of the 1990s and was an SEC Legend in 2015. … Inducted in the UA Hall of Honor in 2017. … Finished his NFL career with the Oakland Raiders in 2002.