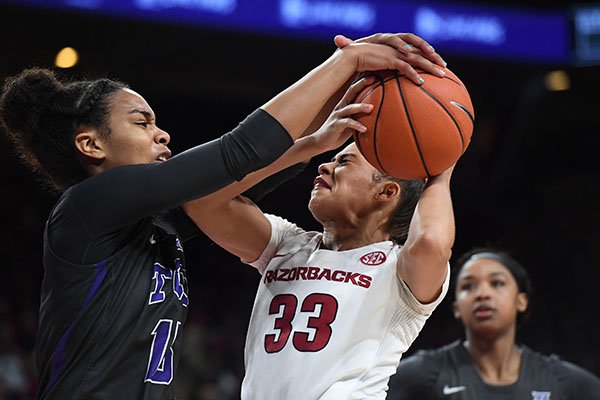 Arkansas' Chelsea Dungee has a shot blocked by TCU's Jayde Woods during a third round WNIT game Thursday, March 28, 2019, in Fayetteville.

The Horned Frogs finally beat the University of Arkansas women's basketball team in Fayetteville on their 13th try.

TCU's 82-78 victory in the WNIT quarterfinals before an announced crowd of 4,718 ended the Razorbacks' season and sent the Horned Frogs to a seminal matchup against Cincinnati.

"Arkansas had a great run at the end of the year," TCU Coach Raegan Pebley said. "I'm really humbled we could get out of this town with a win. It feels great."

Senior forward Amy Okonkwo, who led the Horned Frogs (23-10) with 36 points and 14 rebounds, hit two free throws with 6.2 seconds left to give TCU a four-point lead and clinch the victory.

"I think this should have been an NCAA Tournament game, not an NIT third round," Arkansas Coach Mike Neighbors said. "But we thank the NIT for putting it on and letting us play.

"If we're going to lose, let's lose to those guys. I hope they go win this whole thing."

Arkansas and TCU were among the final eight teams considered by the NCAA Tournament selection committee and ended up being two of the last four left out.

After TCU took a 78-73 lead on Lauren Heard's two made free throws, Arkansas junior guard Alexis Tolefree hit a three-pointer with 14.9 seconds left to make it 78-76.

Okonkwo's two free throws gave TCU an 80-76 lead, but Tolefree was fouled on a three-point attempt and made two of three free throws to pull the Razorbacks within 80-78 with 8.7 seconds left.

"I thought TCU was unbelievable," Neighbors said. "I thought they were so clutch down the stretch."

"We didn't get to the foul line early, and we had to foul late, too, so some of those numbers are a little bit skewed," Neighbors said. "But I thought they got there when they needed to."

"It's always hard to lose," Neighbors said. "I want our kids to feel the sting of it.

"Go home, sleep on it, wake up. Well get together [today]. I'll start working on ways for them to reflect on what a great year it was."

The Razorbacks had turnovers on three consecutive possessions when they trailed 70-68.

"I hate it that we turned it over down the stretch," Neighbors said. "That's hard, because that's not our identity.

"I think we were just trying so hard to do the right thing. You can't fault our kids for that."

Despite the turnovers, the Razorbacks pushed TCU to the final seconds with their three-pointers.

"It was really, really intense, but fun," Pebley said. "This is going to be a game that you go back and watch, because it was a fun basketball game.

"Sometimes in the moment it's hard to experience the fun, because you're coaching so hard and you're playing so hard. But I just felt like our team was out there having fun even when we were down.

"It was a fun atmosphere. Neither team made it easy on the other."