Defense has a good day in latest spring practice 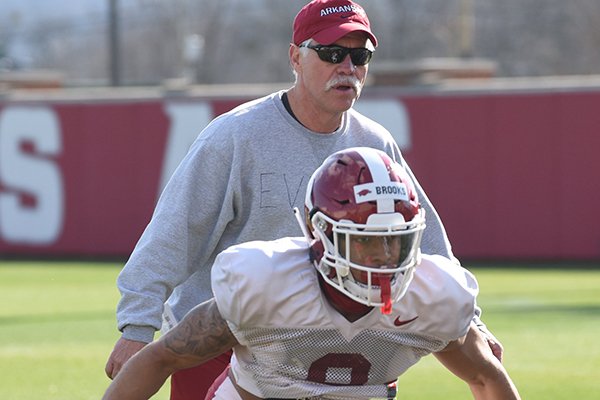 FAYETTEVILLE -- Another three-takeaway day for the University of Arkansas defense will likely end up with that unit retaining the championship belt after spring practice No. 9 on Thursday.

The defensive players in the post-practice media room -- end Dorian Gerald and linebacker Bumper Pool -- said the defense snatched a couple of interceptions and recovered a fumble during the team portions of the outside practice on a pleasant, breezy afternoon.

"I feel like [the offense has] got their first-down percentage and another one," Pool said. "Turnovers trump everything and we got at least three, so we got the win."

Coach Chad Morris and his staff have instituted a variety of incentives in practice to pump up the level of competition and the Razorbacks have run with the ideas.

"We're competing for everything," Gerald said. "I think everybody's on the same page as far as what we want. ... We know our expectations, so everybody's trying to make sure the expectations come alive."

The attack drill has been a featured part to the start of practice since the Razorbacks returned from spring break, and the energy level during that sequence -- where one player tries to get through a gantlet of three teammates -- has been extreme.

The players gave their loudest reactions to attack drill victories by cornerback Montaric Brown, tight end Cheyenne O'Grady, receiver Tyson Morris, tight end Hayden Johnson and linebacker Andrew Parker. Morris might have set a record by getting through the blocks of his three opponents in about five seconds.

"It teaches mental and physical toughness because you're not just going through one person," receiver De'Vion Warren said. " You're going through three and it's keep going, keep continuing, so you have to really focus your mind and continue to go."

Warren has not participated in an attack drill yet, but he danced behind the participants on Tuesday.

"Coach Morris always wants to be energetic, so if you're not going, he doesn't want you to just stand there," Warren said. "I feel dancing keeps me from just standing there. When you dance, it makes you happy, it keeps you juiced."

The offensive and defensive linemen do not run the attack drill -- they run the Razorback drill -- but they like what they've seen from it.

Quarterback Connor Noland went through his fourth practice of spring but did not do the simulated throwing he had done in other practices. Noland is scheduled to start Saturday's Game 2 of the Razorbacks' weekend baseball series against Ole Miss.

Running back Rakeem Boyd, for the second consecutive work day, got in a few reps in the early periods while wearing a yellow jersey. He then went inside Walker Pavilion to put in more rehab work on his shoulder.

The championship belt was not officially awarded after Thursday's practice. There was controversy over whether some of the turnovers came on what Morris called "emphasis work." For example, the quarterbacks were told to throw into certain coverages during that work, senior Ben Hicks said Thursday.

"I think there was a miscommunication on turnovers, which is a big deal when you're winning the belt and they weren't sure how many there were that day, so they couldn't give it away," center Ty Clary said.

"They messed up," Gerald said. "We didn't get awarded one. That one didn't count because of the -- I don't know. They just didn't count. But I think we won. They tried to cheat us on the turnovers. We won."

A large group of high school coaches were among the throng of visitors to the workout, as was College Football Hall of Famer Keith Jackson, father of receiver Koilan Jackson.

The Razorbacks are winding up a busy week. They will hold their third practice of the week today, then hit Reynolds Razorback Stadium on Saturday for the second major scrimmage of the season in spring practice No. 11.

The Red-White game on April 6 will mark the 14th practice of the season and the Razorbacks will practice one more time after that.