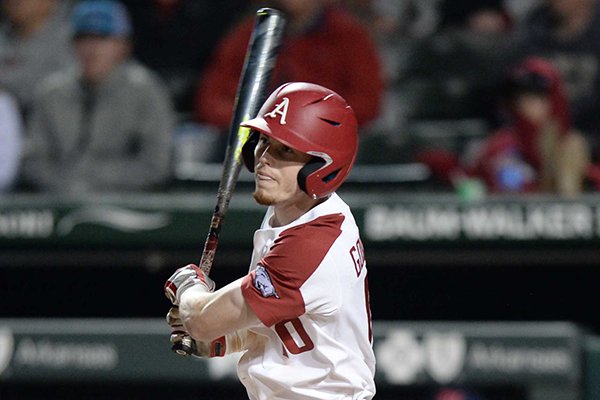 FAYETTEVILLE -- Starting pitcher Isaiah Campbell gave the University of Arkansas baseball team another strong performance and the No. 8 Razorbacks beat No. 22 Ole Miss 5-3 on Friday night at Baum-Walker Stadium before an announced crowd of 7,684.

Campbell, a redshirt junior right-hander, went seven innings for the third consecutive start and the fourth time in the last five. He has gone at least five innings in each of his seven starts.

"Give credit to Isaiah for battling through some innings," Arkansas Coach Dave Van Horn said. " I don't think he had his best stuff."

Arkansas sophomore designated hitter Matt Goodheart went 2 for 3 with a walk and had three runs batted in.

"Once we got him to eye doctor and he had to get a new prescription, he's been hitting ever since," Van Horn said. "It's a lot easier to hit the ball if you can see it."

Arkansas closer Matt Cronin picked up his seventh save by getting the last five outs.

Cronin faced the tying run when he came into the game for Jacob Kostyshock with one out in the eight and runners on first and second. He struck out Ole Miss cleanup hitter Thomas Dillard, but Grae Kessinger and Tyler Keenan pulled off a double steal. They were stranded when Ryan Olenek flied out.

Cronin allowed his first run in 12 innings this season when Cooper Johnson hit a home run with one out in the ninth to pull the Rebels to within 5-3.

Tim Elko then drew a two-out walk, but Cronin got Knox Loposer on a deep flyout to left fielder Christian Franklin to end the game.

The Razorbacks scored their fourth earned run off Ethridge -- and took a 5-2 lead -- when Dominic Fletcher hit a two-out double in the fifth inning and scored on Goodheart's single.

The Razorbacks took a 2-0 lead in the bottom of the first inning.

Leadoff hitter Casey Martin beat out an infield single -- initially he was called out, but that was overturned after a replay review -- and went to second on Heston Kjerstad's groundout and scored on Fletcher's two-out double.

"Getting that overturned obviously was huge," Van Horn said. "He really hustled down the line. It was bang-bang. We thought he was safe, but they've got to get a good view of it, and I guess they did.

"Definitely a big call. That's how important one call can be or one pitch or one play. It can flip an inning or a game."

Goodheart followed with a single that scored Fletcher.

Arkansas made it 3-0 in the second inning. Jacob Nesbit walked and went to second on a single by Casey Opitz. A sacrifice bunt by Franklin advanced both runners, and Nesbit scored on Martin's groundout.

The Razorbacks scored an unearned run off Ethridge in the fourth to extend their lead to 4-0. Trevor Ezell walked, when to second on Ethridge's throwing error on a pickoff attempt, advanced to third on Fletcher's single and scored on Goodheart's groundout.

Fletcher went 3 for 4 and scored 2 runs.

Ole Miss cut the deficit to 4-2 with two runs in the fourth inning. Dillard hit an RBI double to score Kessinger -- who hit a leadoff single and went to second on Keenan's walk -- and Keenan scored on Cole Zabowski's groundout.

The Rebels got runners on first and second with one out in the fifth when Kevin Graham doubled and Anthony Servideo walked, but he got Kessinger on a popout and Keenan on a flyout.

Arkansas didn't score in three innings against Ole Miss reliever Houston Roth, who held the Razorbacks to one hit and two walks.

"I never felt comfortable the whole game," Van Horn said. "I just felt like once Houston Roth got in there, our at-bats were not good at all. That was disappointing.

"I just feel like we need to play nine innings. I didn't see that tonight. I feel fortunate to win the game."