Others can shine as Harris mends 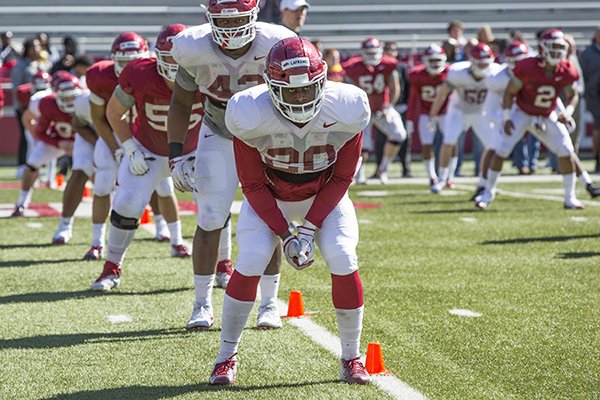 FAYETTEVILLE -- The loss of senior linebacker and vocal team leader De'Jon Harris to foot surgery after one day of spring drills was a blow to an Arkansas Razorbacks' defense looking to take a big stride in Year 2 under defensive coordinator John Chavis and head Coach Chad Morris.

But it wasn't all bad either.

Who’s new Freshman Zach Zimos will arrive in the summer

Analysis Arkansas has struggled to build quality reserves to supplement its starters at linebacker for years. Only three linebackers had more than 24 tackles last year. The numbers aren’t tremendous heading into 2019, especially after losing out on prospects Lakia Henry and Chris Russell, but if Harris and Henry return healthy, the Hogs have a chance to be solid at the position with increased playing time from Morgan and Pool and possibly impact play from freshmen Parker and Zimos. If LaFrance and Edwards can make the necessary strides to contribute on game day, coordinator and position coach John Chavis will have himself a linebacking unit approaching SEC standards.

Harris, who goes by the nickname "Scoota," has continued to tutor the group in meetings, and the players who need to make contributions this fall are getting extra much-needed action on the field in Harris' absence. The wave of top candidates for more playing time this year are juniors Grant Morgan, Giovanni LaFrance and Deon Edwards, sophomore Bumper Pool, redshirt freshman Andrew Parker and junior Hayden Henry, who is rehabilitating a labrum injury.

"We're getting some younger guys reps where they're going to be able to play," Chavis said after the team's first scrimmage. "They have to have those.

"I think both Bumper and Grant, in my opinion, will benefit tremendously. We don't have a starting rotation so to speak, but those two guys, if we played a game today, they'd be our starters. Now, we have guys that are hopefully going to challenge them and make them better and that's what we have to do."

"With Scoota being out, it gives a lot of people more reps. I was actually going to be cross-training doing Mike and Will, but with Scoota out now I'm just going straight Mike. It's really just made us all focus on being able to be our best at our craft."

Harris, who ranked second in the SEC with 118 tackles in 2018, is not only the most veteran defensive presence, along with defensive tackle McTelvin Agim, he's an emotional leader for the entire team.

"I wish Scoota could go through spring," Morris said. "We know what he can do as a player, but I think he's a phenomenal leader. He's the leader of the football team, there's no getting around that."

The inability to develop quality depth at linebacker has been an issue for Arkansas for several years running, with players like Brooks Ellis, Dre Greenlaw and Harris playing an amount of game reps that can lead to decreased performance late in games and late in the season.

Harris spoke in the media room after Day 1 of spring about the need to develop talent at the position.

"With all the new faces it feels a little different," Harris said. "More younger guys. Guys with not that much experience. ... They didn't have that many mistakes like I thought they would have.

"Most of the young guys are energetic self-starters. They come out there with a good vibe and get it going and I like that."

With Harris out and Greenlaw -- a four-year starter -- preparing for the NFL Draft, the Razorback linebacking unit is mostly unproven. Morgan and Henry have gotten a scattering of playing time the last couple of years, while Pool made four starts as a true freshman when Greenlaw was slowed by injuries.

"Last year I was a deer in the headlights just trying to soak everything in, and now it's knowing my job," Pool said. "But not only that, it's knowing the whole defense and where I fit in in the defense and what we're supposed to do in disguising coverages. It's completely different."

Pool, a 6-2, 223-pounder, said he attacked needed areas of improvement through the winter.

"I put on eight pounds and just kind of leaned up," he said. "A big thing for me was just putting on weight and getting stronger. That was one of the things last season that I lacked, and I'm looking forward to continuing that throughout the summer."

Parker, who battled a hamstring injury while redshirting last year, was a top signee whose 6-2, 238-pound frame will be a major asset when he learns to play fast in the scheme.

"I'm not a guy who likes to come in and talk about how complicated our scheme is," Chavis said. "It's really not that complicated, but it is. He's got to be able to put all the pieces together.

"We're a big concept-driven defense. We teach concepts and once a young man can master his concept on that call, then he's going to be able to play. That's what we do. ... He's got to keep learning and guess what, it takes reps. He was a young man that played outside linebacker in high school and he's a Mike linebacker and it's new for him. But he's coming and he's going to get there."

"I definitely feel like -- I hate that Scoota is out -- but it definitely shows that the guys behind him have been paying attention and have been learning, because they haven't been missing a beat," Gerald said.

Harris advanced in his rehabilitation this week, getting off a scooter and putting weight on his foot. Signee Zach Zimos is expected to arrive this summer and make an impact on the position this fall.

Maybe the return of a healthy Harris, the addition of Zimos and contributions from a group that is getting extra action without them, the Arkansas linebacking corps can finally flex some depth this fall.