State of the Hogs: Bell, lettermen deliver message that resonates with Morris 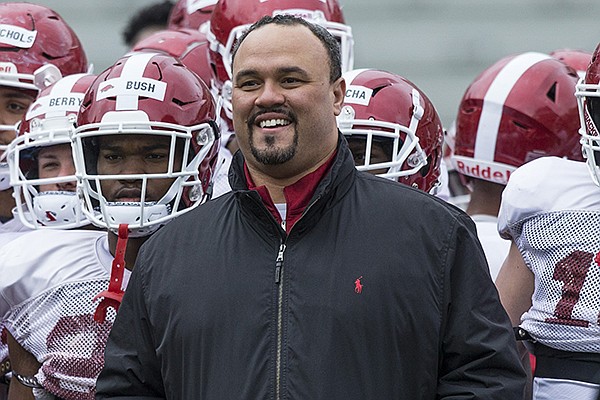 Yes, he’s now the sideline reporter on the team radio broadcasts, but he’s much more than that, a letter winner that can attest that lessons learned in football translate to the business world.

Bell played four years for Danny Ford, five if you count redshirting his true junior season in 1996 after back surgery. Then there were four seasons in the NFL, most notably 1998 under Bill Parcells with the New York Jets. There was also three years with Cleveland, some of that on injured reserve.

It’s a Parcells saying that was the message that stood out Saturday when Arkansas coach Chad Morris brought a handful of former players in front of his team just before the spring’s major scrimmage.

It was then that Morris reached for his pen when Bell delivered a message that is a constant in his role as a senior team leader at the home office for the Bentonville-based Walmart.

“This is what I heard that stood out,” Morris said as he was leaving the interview room Saturday afternoon. “Geno told our guys, ‘When it’s time to perform, the time to prepare has passed.’ It was so good.”

Morris didn’t know that was handed down from Parcells, one of the game’s great coaches. Bell said it’s the mantra for his team at Walmart.

“I’ve got it written beside my bed,” Bell said. “I read it every morning when I get up for work.”

It was as important for football as it is before work.

“Yes, it works in football,” Bell said. “Coach Parcells would tell us as we worked as second teamers – never getting any reps in practice – that we had to take mental reps and be ready because when someone went down, we were in the game with no practice time. Our time to prepare was over and it was time to perform.”

Bell was pleased to know it stuck with Morris and might be part of his constant message to this bunch of Razorbacks. It will serve them well way past their football careers.

The Columbia, S.C., native preaches it all over the country in his role within Walmart supply chain. He is senior director for consolidation, meaning he has a role in the way goods move through distribution centers.

“Consolidation means that we take less than truck load (LTL) merchandise and make a full trailer that then ships to our Regional Distribution Network,” Bell said. “Our goal is to deliver a full perfect trailer to our customers every time. We make sure every aspect of the supply chain is optimized so we can deliver on our mission — save people money so they can live better. ”

It’s a massive job for a massive person. Bell was a great player for the Hogs in the heart of the Ford era. He was a fan of Ford, previously head coach at Clemson. Interestingly, he was the first from South Carolina plucked from Ford’s old stomping grounds. He played immediately at Arkansas and was a solid defensive tackle in all four seasons.

“It was so good to hear our former players talk to our team today,” Morris said. “They talked about life lessons. I really liked what Geno said, but all of them had important messages.”

Among those to talk were Kenny Sandlin, Michael Snowden, Raymond House and Lerinezo Robinson. There were several others who were on the sidelines to watch the scrimmage, including Ryan Hale and Curt Davis.

“I’m glad that Geno talked to them,” Hale said. “I doubt they know what kind of role Geno has at Walmart, the impact he has on that huge company, one of the biggest in the world.

“So for him to visit with them on how football can impact their careers after the game, it’s really key.”

Bell was uplifted by his brief moment in front of the team. He ached to do that long ago, but saw a locked door instead of an invitation.

“What Coach Morris has done with the former players, to make sure we are a part of the program again, is huge,” he said. “There was a time not in the too distant past that it wasn’t this way at Arkansas.”

Bell said he and two teammates rolled into a practice during the Bobby Petrino era, excited to perhaps just watch a practice. It was after the wins were starting to pile up.

“I just wanted to watch a little bit of a workout,” Bell said. “I think it was in 2011 when I had moved back to Northwest Arkansas.”

Bell said he was standing on the sideline at practice when team personnel came to the three lettermen.

“They said it’s a closed practice, to leave,” Bell said. “Are you serious? Yes. I just thought to myself, I guess football has changed when a former player isn’t welcome. But we were not welcome and I didn’t go back.”

That did change slowly under Bret Bielema’s watch, but not nearly like it has with Morris when players have been tracked down and invited to come to any practice. Events have been organized just with former players, who spend time with current players and coaches.

“Amazing,” said Hale, a Rogers product who earned a Super Bowl ring with the New York Giants. “I think it’s important and will have a far-reaching impact. I think it will translate to the field as players see that not only does a letterman have a role here, but also they do in the business world.

“If we are not a part of what is going on, that comes across. If we are and can relate it, then it’s going to help. I can promise that all of us think highly of this coach and his staff.

“We see the discipline in the locker room. We see how he is recruiting. We know he’s not going to say or do something that embarrasses us. Look around today, there are recruits all over the place. That’s the way it is every time I’ve come down to watch practice.

“I can’t speak to what is going on in the practice. Football is different. The Xs and Os are not the same as when I played, but I can tell if they are working hard, getting after it and if it’s a positive environment with high energy. I see that.”

Bell sees far more practices in his role as sideline reporter. He does offer a comparison as the Morris system grows.

“What I see that’s different from last spring to this spring is that it’s much more physical, much more attention to fundamentals,” Bell said. “I think they worked hard last spring, but the buy-in is better from the players now. That just takes time.”

Bell watches from a defensive line perspective. A former tackle can’t help but turn his eyes to that area.

“This defensive line has improved and so will the offensive line as they work against those guys,” Bell said. “I like what I see every day in practice.”

Bell also likes what he sees in the make-up of the team, young leaders scattered through the roster - legacy players like Hayden Henry, Mataio Soli and Zach Williams. There is another on the way in Henry’s younger brother, Hudson. In each case their dads were leaders, often captains.

Among the former captains at recent practices have been Mark Smith, Louis Campbell, Ken Hatfield, and, of course, Mark Henry and Rickey Williams.

“Yes, some days it’s like the captains of the captains, the very top leaders from through the years. That’s who our players are seeing and I think that’s great,” Bell said. “Coach Morris wants us there. He wants us to be a part of what he’s doing and he’s getting it done. We see it.”

Bell doesn’t mind talking to players, but that’s not really why he’s there. He just busts with pride to be on the sideline to watch what’s happening.

“You put in the blood, sweat and tears to be a Razorback and I love seeing these young guys doing the same thing, learning life lessons,” he said. “I just want them to know it’s the same things that will help them the rest of their lives.

“You learn in the tape room, you listen, you try to be ready and then take advantage of your chance. You don’t know when it’s going to happen, so you prepare, prepare and prepare like you are already a starter.

“Then, when you get into the business world, it’s the same thing. You listen, learn and prepare. You don’t know when someone points to you and you are in the game, doing a job that maybe you haven’t done, but you watched someone else do it and you were ready.

“My team is like that at Walmart. Not everyone is a starter, but they are team players and ready when their number is called. They get reps in meetings and they listen. Then, it may be their turn to act in a few weeks or months. You don’t know when a promotion is coming. No one does. You have to be ready for change.

“In every team, every business, learning may come a different way. But it all translates, the things you learn in football. My career at Walmart mirrors what I learned in football. What Bill Parcells told us with the Jets is the essence of that.”

Morris didn’t have to hear it twice.

Bell had no idea it had hit home.

“I love it,” he said. “That just shows you how Coach Morris gets it and how it all fits together.”

It makes an old Razorback feel young. It makes them feel a part of what’s being built. How soon all of that falls in place and 2-10 becomes 10-2 is not clear.

“It’s coming,” Bell said. “I see the talent coming to campus every day, but it doesn’t happen overnight. It takes time. I see growth on the field and in the weight room. I see players getting it in academics. You need all three to be successful on and off the field.”

They probably think they are going to be playing for the Jets some day, but maybe what they are learning pays off in business, too. There is solid evidence watching from the sideline it sure can.