Arkansas softball caps regular season with sweep of No. 23 Auburn

By: Steve Andrews, Special to the NWADG
Published: Sunday, May 5, 2019 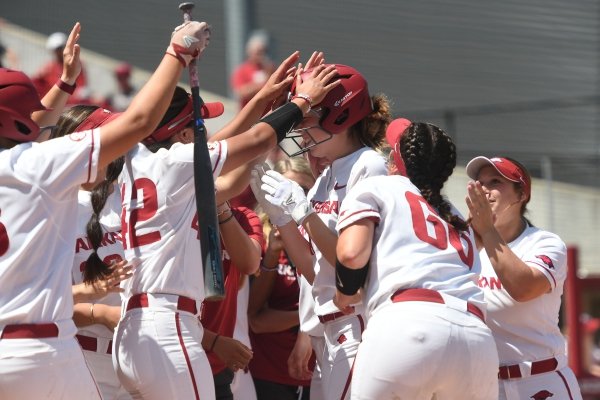 The Arkansas squad congratulates Danielle Gibson on her home run in the fifth inning against Auburn Sunday May 5, 2019 at Bogle Park in Fayetteville. The Razorbacks won 5-2.

FAYETTEVILLE — It was a storybook ending to the regular season for the Arkansas softball team Sunday at Bogle Park.

It was the first SEC series sweep for Arkansas this season.

“I was just really happy with how the team competed from the start of this weekend until the end,” Arkansas coach Courtney Deifel said. “I thought our pitching set an amazing tone in the circle, and what I really liked about our offense is how we were able to score in different ways.”

Both teams will now head to the SEC Tournament, which begins Wednesday in College Station, Texas. The Razorbacks will be the No. 9 seed in the tournament and will play No. 8 seed Georgia in a single-elimination game Wednesday at 5:30 p.m.

The winner of that game will play No. 1 seed Alabama on Thursday.

“This just gives us some momentum going forward,” Deifel said. “We are just worried about us at this point, and continuing to play at a higher level each weekend. We just want to be the best version of ourselves.”

After mustering just one unearned run in the first two games of the series, Auburn plated its first earned run against Razorbacks pitching in the first inning Sunday when Alyssa Rivera singled in Casey McCrackin for a 1-0 Tigers lead.

Arkansas wasted little time bouncing back in the bottom of the inning. After sophomore Hannah McEwen led off with a single, senior Ashley Diaz put the Razorbacks on top with a two-run blast over the left field wall. It was Diaz’s ninth homer of the season and 30th of her career, moving her to fourth on Arkansas’ all-time list.

“I thought Ashley was incredible today and has been so consistent for us for so long,” Deifel said. “It was just great to see our seniors go out on such a positive note. They all deserve it.”

McEwen finished with two hits, going 5-for-11 in the series. Her .402 batting average makes her the first Arkansas player to ever finish the regular season above .400 and is the highest average since Stephanie Canfield hit .381 in 2013.

Arkansas extended the lead to 4-1 in the fifth when sophomore Danielle Gibson led off the frame with a solo home run to center, her team-leading 12th of the season. Senior Katie Warrick later came around and scurried home on a passed ball.

Auburn’s Kendall Veach hit a solo homer in the top of the sixth only to see Diaz retaliate in the bottom half with an RBI double to cap the scoring.

Arkansas junior Autumn Storms (20-6) went six innings to earn the victory in the circle before sophomore Mary Haff came in to pitch a perfect seventh for her fifth save of the season. The two pitchers combined for a 0.67 ERA over the weekend, allowing just two earned runs in 21 innings.

“Mary and I will always have each other’s backs no matter what happens,” Storms said. “We know that we will both lay our hearts out there for our team every time we get in the circle.

“Ending with a sweep in SEC play is huge for us. We were able to finish the regular season on a high note, and we feel strong heading into the SEC Tournament.”

SHORT HOPS: McEwen only needs eight hits in the postseason to break Arkansas’ single-season hits record (80) … The Razorbacks are second in the SEC in strikeouts by pitchers (350) and strikeouts by hitters (268) … The Arkansas pitching staff is fourth nationally in strikeout-to-walk ratio, striking out 350 this season while only surrendering 70 walks … The Razorbacks have outhit their opponents in six straight games and in 15 of their last 16.