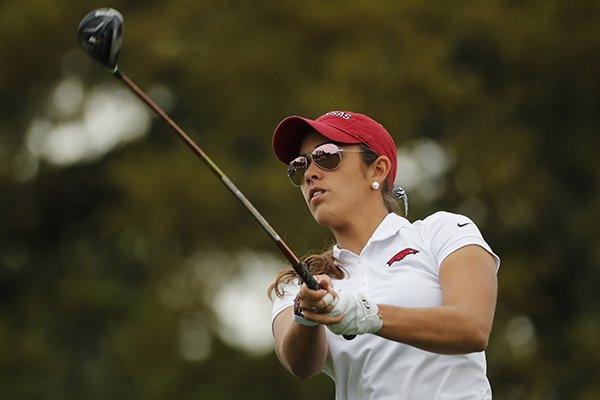 FAYETTEVILLE -- If the No. 8 University of Arkansas women's golf team is to compete for the NCAA title on its home course, the Razorbacks will have to excel far away from home the next three days.

Arkansas is the No. 2 seed at the NCAA Cle Elum Regional, about 90 miles east of Seattle. Coach Shauna Taylor and her club, winners of the NCAA Austin Regional last year, need to finish in the top six in the 18-team field to advance to the championships at The Blessings, starting May 16.

When Today through Wednesday

The Razorbacks are making their 17th consecutive NCAA regional appearance and the 18th in program history. … Arkansas shot a school record 26-under par to win the NCAA Austin Regional last year. … The Razorbacks led the field with 57 birdies on the UT course and went 23 under on the par 5s, 13 strokes ahead of the next-best team in the field. … Arkansas senior Maria Fassi, a six-time winner last season, has 9 career titles, including the 2018 NCAA Austin Regional.

"What team wouldn't want to host the Super Bowl in their backyard?" Taylor said. "I think that's a perfect analogy.

"There's an excitement about that. Like any regional that we go to, we still have to go take care of business in Washington and, obviously, getting back here is going to be an amazing opportunity for us when we do."

Arkansas will tee off with No. 1 Southern California and No. 9 South Carolina at 10:30 a.m. Central.

The Razorbacks' season has taken a much different trajectory than last year, when they won seven events, including their first SEC title, then blasted all competitors in Austin by 11 strokes, led by the nation's No. 1 golfer Maria Fassi.

This year, Arkansas is still looking for its first event title.

That duo will be joined by senior Dylan Kim and freshmen Brooke Matthews of Rogers and Ximena Gonzalez in the Arkansas lineup on the 6,306-yard, par 72 Tumble Creek Club course just off the Cle Elum River.

"I think we're great," Taylor said of the Razorbacks' positioning despite not claiming a team title. "I love the locker room and their confidence in each other. We've played the fifth-toughest schedule in the nation this year, and I think that just has really battle-tested us and prepared us.

"I don't think we've by far played our best golf yet. As a coach, this is our favorite time of year, when you get to compete for championships."

The Razorbacks flew out of Northwest Arkansas on Friday, rested up Saturday and played their practice round on the unfamiliar course Sunday.

"I don't know a lot about it," Taylor said. "They hosted an NCAA regional a few years ago, so I was able to go back and get some of the data from that, like which holes played the hardest, just to give me a little bit of an idea of where the difficulty of the golf course lies before we get there."

The top six teams after three rounds of stroke play at each of four regionals will make up the field at The Blessings. The other regionals are being held in Opelika, Ala., Lansing, Mich., and Norman, Okla.

"We've played on similar grasses in Minnesota in the fall, sort of that Northerny style of grass," Taylor said. "I would expect that it's just a great championship test of golf or they wouldn't have a regional. It's not a home course for Washington, so I don't know that there's a ton of home-course advantage for them.

"We have to go there with a purpose to win a golf tournament and on a mission."