By: Richard Davenport
Published: Wednesday, May 8, 2019 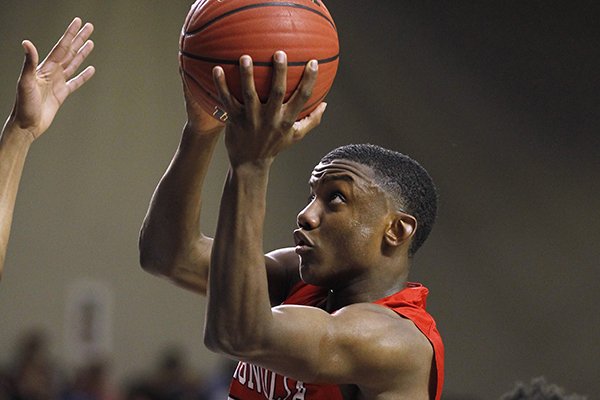 "It was great, it felt good," said Ford, who's expecting to talk to Arkansas coach Eric Musselman later in the evening. "I thanked God when it happened."

He mentioned the first thoughts after hearing of the offer.

"Maybe one day I could represent my home state," Ford said.

"He said they've been keeping up with me and I have a special talent and I have a lot of work to do, but he thinks I could go play on the next level after college basketball," Ford said. "It made me feel good and let me know I have to keep working hard, get stronger and bigger and faster."

Ford is second in scoring on the Under Armour Association circuit in the 16-under division with 22.6 points per game while playing for Little Rock-based Team South. He admitted he thought of pulling the trigger and being a Razorback

"Yes sir, but only time will tell, but I was sure thinking about it," Ford said.

Ford was named the Arkansas Democrat-Gazette Underclassman of the Year after leading Magnolia to the Class 4A state title. He earned MVP in the Panthers 78-76 overtime victory over Mills.

His father, Darnell Ford, was thrilled about the offer.

Darnell said he and his son were hearing from former Arkansas assistant Melvin Watkins and figured the new staff would eventually reach out.

"The coaching change happened and we kind of figured be maybe a minute and we were going to keep working hard," Darnell said. "I'm just grateful and thankful to God they even called because we're going to keep working hard and representing Magnolia. Magnolia, Arkansas, loves the Razorbacks. One day, if God allows, maybe he can showcase his talents on the Hill, or whatever God has for him."