By: Scottie Bordelon
Published: Wednesday, May 8, 2019 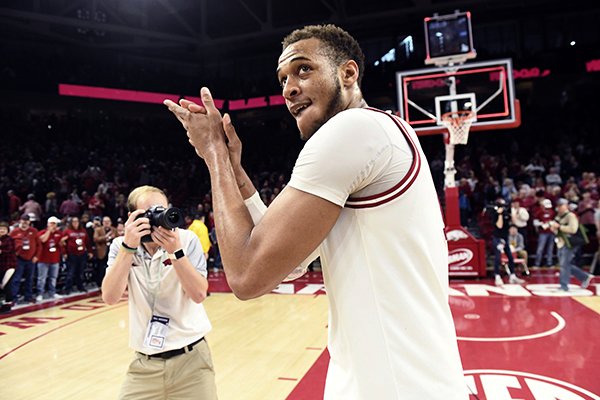 Gafford is the second Razorbacks player to be invited to the event since 2015. Former Arkansas guard Jaylen Barford was invited and attended in 2018. Gafford, an El Dorado native, declared for the NBA Draft of March 18, one day before the Razorbacks were scheduled to face Providence in the NIT.

The combine is scheduled for May 15-19 in Chicago.

Sam Vecenie of The Athletic projected Gafford going No. 27 overall to the Brooklyn Nets in his pre-NCAA Tournament mock draft, and ranked him No. 27 in his pre-NBA Combine Big Board. Jonathan Givony, a draft analyst at ESPN, slotted Gafford at pick No. 29 to the Golden State Warriors in mid-February, and No. 36 to the Charlotte Hornets on April 12.

Gafford was a consensus first-team All-SEC selection in 2018-19. He was the only player in the SEC to finish in the top five in scoring, rebounding, field goal percentage, blocks and offensive and defensive rebounds.

He was also named to the All-SEC defensive team and averaged 16.9 points on 66 percent from the floor and 8.6 rebounds in 32 games.

Gafford finished his Arkansas career with a 14.3 point-per-game scoring average on 63.5 percent shooting, which ranks second overall in school history, 7.4 rebounds and 141 blocked shots. In SEC games only, he shot a program-record 62.1 percent.

Thirteen other SEC players were invited to the combine.