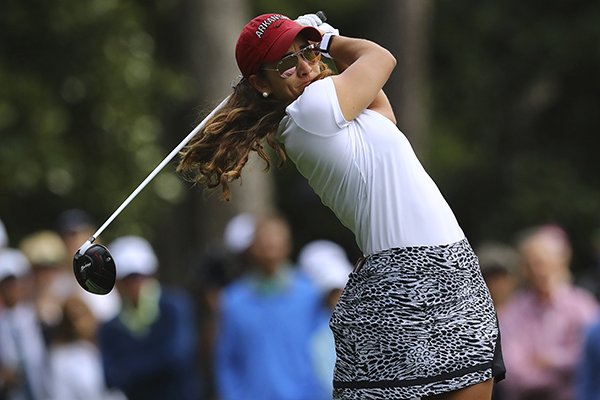 The No. 8 University of Arkansas women’s golf team clinched a spot in the 24-team NCAA Championships by firing a team score of 2-under on Wednesday at the NCAA Cle Elum Regional outside Seattle.

The Razorbacks closed the regional in fourth place, the position they held at the end of each round at the 6,306-yard Tumble Creek Club course, with a score of 5-over par 869.

Senior Maria Fassi, the reigning SEC champion, and freshman Brooke Matthews from Rogers led the Razorbacks’ charge in the final round of the 54-hole regional.

No. 1 Southern California ran away with the title by shooting a 10 under on Wednesday to finish at 20 under, 15 strokes ahead of Pac 12 rival and No. 19 Washington. The Trojans will be among the favorites for the NCAA championships, which begin on May 17 at The Blessings in Fayetteville.

Fassi fired a 3-under 69 on Wednesday and finished at 6 under and tied for fifth place with Northwestern’s Brooke Riley.

USC’s Jennifer Chang was the regional medalist with an 11-under par, one shot better than Washington’s Rino Sasaki and Central Florida’s Ana Laura Collado.

Matthews was 3 over after a double bogey on the par-4 5th hole, but she carded seven birdies the rest of the way to post a 70 for the day and a 3 over for the tournament. She finished tied for 22nd.

Arkansas senior Kaylee Benton completed the tournament at 2 over and tied for 17th place after shooting a 73 on Wednesday. Benton was at 2 under following a birdie at No. 10, but she gave the stroke back on the next hole and had a double bogey down the stretch.

Freshman Ximena Gonzalez had birdies on 16 and 18 to provide the Razorbacks’ other counting score at 2-over 74. She tied for 40th overall at 6 over.

Senior Dylan Kim had her best round of the tournament with a 75 on Wednesday for Arkansas’ non-counting score. Her 21 over tied for 82nd place.