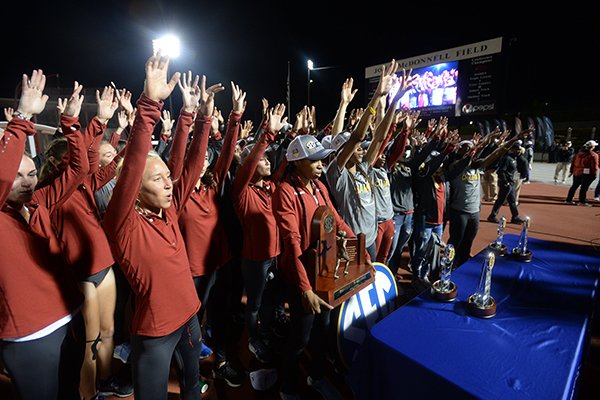 FAYETTEVILLE -- The University of Arkansas women's track and field team already had clinched its latest title going into the final event of the SEC Outdoor Track and Field Championships, but the Razorbacks ran the 1,600-meter relay as though the meet was on the line.

"We talked about it before that race, that this was the seniors' last meet on this track representing the Hogs," Arkansas assistant coach Chris Johnson said of seniors Payton Chadwick and Kiara Parker running on the relay. "We wanted to make a statement for those young ladies who have done so much for us.

"Basically, we said, 'This race is their victory lap.'"

The Razorbacks showed why they're the No. 1-ranked team nationally by piling up 139 1/2 points to win the championship. Texas A&M finished second with 85 points.

"So we laid it all out there. That was awesome."

Chadwick got the baton for the third leg in fourth place, but handed it to Campbell on the anchor with the lead.

"I was behind coming off the last curve," Chadwick said. "I said, 'OK, this is my time. I've just got to get the baton to Kethlin in first.' Because once I did that, I knew she'd win the race for us."

"They said, 'Hey, let's go ahead and seize the moment,'" Harter said.

Chadwick, from Springdale Har-Ber, ran four races Saturday. First she ran a leg on Arkansas' second-place 400 relay -- along with Parker, sophomore Janeek Brown and Campbell -- that ran a school-record 43.10. Then she ran a personal-best 12.70 in the 100r hurdles to take second behind Brown.

"What Payton did was nothing short of fantastic," Johnson said. "We've asked her to do a lot. You've got to appreciate a talent like her when you have it. Hopefully, we've taken care of her as well as she's taken care of us."

Chadwick said she wasn't feeling tired despite her heavy workload.

"Right now I'm actually OK," she said. "I've got a lot of adrenaline. I feel like I can go run again, but Sunday morning is when I feel like a train hit me."

Brown, a sophomore from Kingston, Jamaica, won the 100 hurdles in 12.55 to break her own school record and lead the world this outdoor season.

"At the beginning of the race, I was a bit nervous," Brown said. "But I executed pretty well. It felt good to win."

Brown, who took fifth in the 200 in 23.12, marveled at Chadwick's ability to run well in four races on the same day.

"I just hope that one day I can get Payton's work ethic," Brown said. "She puts herself out there for her team, and she does it without complaints. I'm really proud of her."

"Before the 5,000 I told those girls, 'Just have fun with it and we'll nab a couple points,' and we got 1-2," Harter said. "That snowball effect -- the positive momentum -- becomes very infectious. Everybody wants to rise to the challenge."

"That was a pretty good harvest," Harter, who coaches the distance runners, said of scoring 58 points in the 1,500, 5,000 and steeplechase.

It was Arkansas' 15th SEC title in the past 16 conference cross country and track meets, and the Razorbacks bounced back in a big way after finishing sixth outdoors last year when many of their key athletes were redshirting because of injuries.

"I'm really happy with what I was able to do in my last home track meet as a Hog," Chadwick said. "There's nothing better.

"I get to go home and sleep in my own bed after an amazing win. It's something I'll cherish forever."