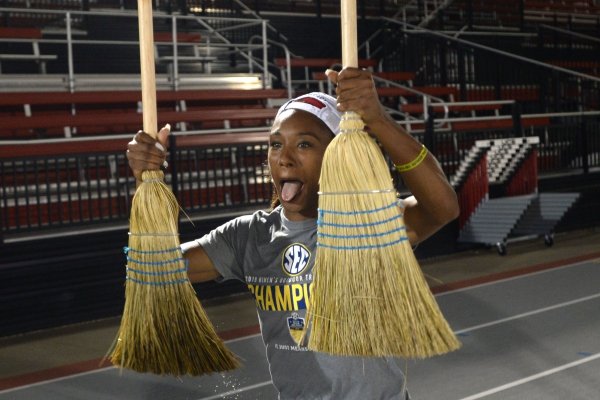 FAYETTEVILLE -- After the University of Arkansas women's track and field team was handed its latest trophy from SEC Commissioner Greg Sankey on Saturday night at John McDonnell Field, the Razorbacks broke out some brooms.

"Kiara brought them," Arkansas sprinter Janeek Brown said of teammate Kiara Parker. "Because we had a sweeeeeep."

The way the Razorbacks are sweeping conference championships, they probably should have taken turns driving a Zamboni machine around the infield to celebrate.

When No. 1-ranked Arkansas won the SEC Outdoor Track and Field Championships with 1391/2 points, it marked the Razorbacks' fourth triple crown -- sweeping conference cross country, and indoor and outdoor track titles in the same school year -- in the past five years.

Texas A&M, ranked No. 2 nationally, finished second at the SEC outdoors with 85 points -- 541/2 behind the Razorbacks.

Over the past six school years, Arkansas has won 16 of 18 SEC meets. Florida won indoors in 2014 and last year.

So since the 2013-14 school year, the SEC championship scoreboard reads Arkansas 16, Florida 2, everybody else 0.

"That's why I transferred here," said Razorbacks senior sprinter Payton Chadwick, who is from Springdale Har-Ber and left Oklahoma after her freshman year to come back home to Arkansas. "I wanted to be amongst elite athletes and coaches.

The UA women’s cross country and indoor and outdoor track and field teams have won 16 of 18 SEC meets over the past six school years, including four triple crown sweeps. Florida won the other two SEC titles in that span.

Results are divided into the fall semester for cross country and spring semester for track and field to cover the same school year:

"I think it was a pretty good decision. I've been a part of multiple SEC championships and national championships."

At the SEC outdoors, 15 Razorbacks scored in 12 events, with 61 points coming in the sprints and hurdles, 57 in the distance races and 21 1/2 in the field events.

"It's a tribute to the overall coaching philosophy of the program," Harter said. "Chris and Bryan are both head coaches in their own right.

"When we put all three prongs together, it makes for a very formidable team."

"We get momentum from each other -- from everyone," Campbell said. "We all push each other to do well."

Harter, in his 29th year at Arkansas, has led the Razorbacks to a combined 35 SEC titles in cross country and indoor track since the Razorbacks joined the conference in the fall of 1991.

The Razorbacks won a combined six SEC indoor and outdoor titles before Johnson joined the staff, and have won 11 since Harter hired him from Penn State.

"I'm still the same guy, and Bryan's the same guy," Harter said. "I think Chris Johnson is the real difference. He's the X factor. The way he develops kids has become a keystone for our program."

Johnson said Harter was being too kind with his words, but that he wants to make sure to do his part.

"I want Arkansas to be known as a track program," Johnson said. "Not just a distance school or a pole vault school, but a total track program.

"I'm not taking anything away from what Coach Harter has done or what Bryan has done. I just want to add on to that. There are a lot of sprint events in an outdoor track meet, so we have to cover a lot of ground, and we want to be effective."

Going into Saturday's events, Harter said he believed the meet might go down to the wire between Arkansas and Texas A&M.

"That's Coach Harter all the time," Chadwick said with a laugh. "He always gets all anxious and nervous, and then we pull it off."

Harter said there's extra satisfaction to Arkansas' run of SEC titles the past six years because of the conference's strength. Six SEC teams are ranked in the top 10 of the current national poll.

"This is the beginning of the championship season," said Harter, looking ahead to the West Regional and NCAA Championships. "What better test than the SEC, because it's the best of the best."

"I've been very blessed to have great coaches and they attract great athletes," Harter said. "That's a winning formula for us.

"You've also got to have everybody healthy, so our medical team is a factor. We have an administration that supports us and helps us get where we need to go."