Aggies 'will do what is best for our team,' start freshman in opener vs. Arkansas 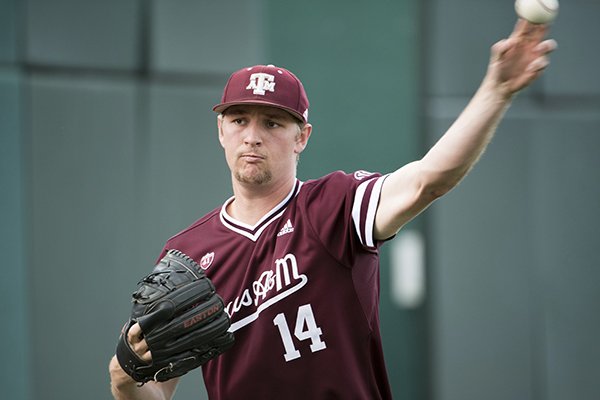 FAYETTEVILLE — A suspension and a short week have led No. 19 Texas A&M to modify its pitching rotation this week against No. 4 Arkansas.

The Aggies will start freshman left hander Chris Weber on Thursday against the Razorbacks. Texas A&M will hold one of its two aces, junior lefty John Doxakis, for the Friday game to keep Doxakis on a seven-day rest schedule.

“We’re going to have to do what is best for our team, obviously,” Texas A&M coach Rob Childress said Tuesday during an interview with TexAgs Radio. “Chris Weber is going to plug in in replacement of Asa Lacy and just try to keep Dox on his normal rest. Weber might be the fresher guy to go.”

Doxakis (6-3, 1.93 ERA) has been Texas A&M’s No. 1 starter all season. Arkansas coach Dave Van Horn said Monday during his speech at the Swatter’s Club that Doxakis is good enough to be a first-round pick in next month’s MLB Draft.

Texas A&M is without its other ace, sophomore left hander Asa Lacy (7-4, 2.13 ERA), this week after Lacy was ejected for arguing balls and strikes during the fifth inning of his start at Alabama last Saturday. NCAA ejection rules state that pitchers must miss four games.

For Lacy, that includes the entire Arkansas series because the Aggies - like the Razorbacks - don’t play any midweek games this week.

“There is no appeal process and that’s the disappointing thing,” Childress said. “A snap decision is made and it costs a guy four games, especially down the stretch it’s disappointing. There was no warning given to the kid or to myself and the fact that he’s got to sit out four games, that’s the rule and it’s next man up and we’re going to have to have some guys do well in a starting role and some guys step up for us in the bullpen.”

Weber (4-0, 2.79 ERA) has been one of the Aggies’ top relievers this season but he hasn’t been asked to pitch more than 3 2/3 innings in a conference game.

Weber was the winning pitcher at Alabama last Sunday. He stranded a base runner in scoring position to preserve a 5-3 lead after entering the game in the fifth inning, then left the game in the sixth after he loaded the bases on a pair of hits and a two-out walk.

A week earlier he allowed 1 run on 2 hits and 3 walks in 2 1/3 innings against Mississippi State. He entered the game with two runners on base and the Aggies trailing 1-0.

“He’s very mature,” Childress said. “He throws four pitches for a strike and nothing ever fazes him. He’s done a really good job of controlling the game and the environments he’s been put in.

“For the last two months, he’s been as hot as anybody.”

“I do feel like our pitching matches up incredibly well with them,” Childress said. “We do have a chance to slow them down offensively. We’ve got to score runs and take care of the ball defensively, and if we do that we’ve got a chance to win every game.”

Both teams enter this weekend’s series with a lot on the line.

Arkansas (39-13, 19-8 SEC) has a one-game lead over Mississippi State in the SEC West and is one game behind Vanderbilt in the overall SEC standings. The Razorbacks also are in contention to be a top-eight national seed in the NCAA Tournament that begins May 31.

“We’re in good shape,” Van Horn said. “We’ve had a good year so far and we’ve done what we can do. It’s kind of like you can’t really worry about those things. We just have to try to get better and win some games.”

Texas A&M is out of contention in the division race, but the Aggies have the nation’s No. 12 RPI and could strengthen their chances to host a regional with a strong weekend against the Razorbacks.

“We’ve certainly had everything in front of us all year long, and here it is the last weekend of the year and it’s still all there for us,” Childress said. “Taking care of winning the series at Alabama was huge. We’ve got...an opportunity to finish as high as we can in league play and earn the opportunity to host come postseason.”