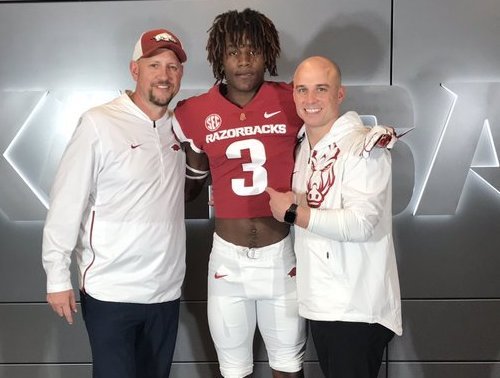 Claude Mathis was the athletic director and coach at Marshall in 2017 and 2018 before leaving to become the coach at DeSoto in January.

"He's vastly underrated," Mathis said. "Sometimes east Texas can be under-recruited, and east Texas is a great place for kids and he's one of those kids that's deceptive and can freaking play, man. He's a great student-athlete as well.

"Sometimes they see his size and don't think he can run. He can freaking run. I think a lot of Division I schools are missing out on this kid."

Mathis is very familiar with Coach Chad Morris and his staff. He joined Morris' staff at SMU as the running backs coach in December of 2014 after his first stint as head coach at DeSoto, where he had a 74-18 record in seven seasons and made two Class 5A state semifinals.

He left SMU after 21/2 years on the staff to spend more time with his three children and coach his son, Champ, who was a junior defensive back at the time.

When Mathis and staff arrived in Marshall, Williams was very raw.

"I told him we would get him developed as a receiver," Mathis said. "He didn't know how to run routes very well, he wasn't strong. He was just playing off of his athletic ability, and I told him myself and my staff always develop kids."

"You can't guard him one on one. It's going to take two people," Mathis said.

Speed isn't an issue with Williams, who looks more like a slot receiver in the open field despite his size.