Musselman hopes to complete staff in near future 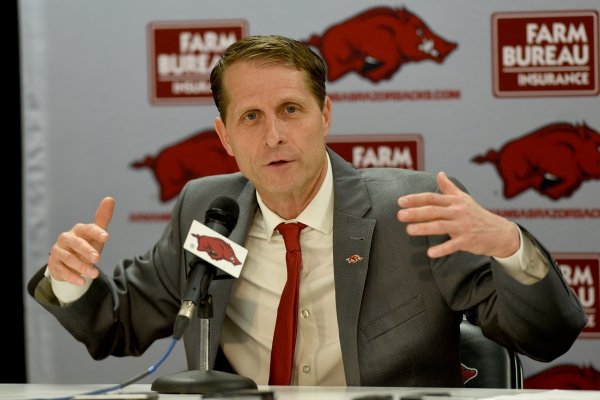 Eric Musselman provided something of a timeframe this week in regards to when his coaching staff at Arkansas will be complete.

In an interview Monday on the College Hoops Today podcast with Jon Rothstein, college basketball insider for CBS Sports and Sports Illustrated, Musselman said he hoped to have a full staff in line "in the very-near future."

Prior to his tenure with the Hatters, Williams served as a student assistant at Oklahoma State from 1993-94, was an assistant coach at Oral Roberts from 2000-2007 and a Florida State assistant coach from 2007-13 under Leonard Hamilton.

Musselman added that he has made hires to his support staff, which he said have been helpful in his transition from Nevada, where he spent the previous four seasons.

Anthony Ruta and Hays Myers, an assistant coach and director of player development, respectively, under Musselman at Nevada, have been working with Musselman in Fayetteville and on recruiting trips. Their job titles are not known.

Throughout the process of trying to nail down his staff, Musselman said he has aimed to exercise a good deal of patience.

"We just want to make sure, especially right now ... players are done with finals and are on break right now," he said. "There’s no recruiting really going on once the next 24-48 hours hits, and we have a little bit of a dead period as well.

"So, for all of those reasons, we want to have great patience and make the right decision."