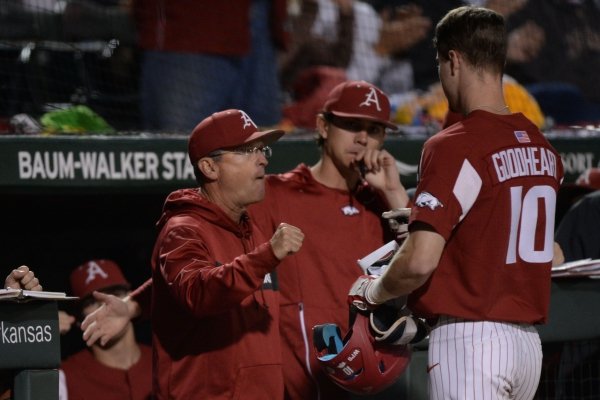 Arkansas LSU Friday, May 10, 2019, during the inning at Baum-Walker Stadium in Fayetteville. Visit nwadg.com/photos to see more photographs from the game.

FAYETTEVILLE -- Dave Van Horn promised University of Arkansas fans at the monthly meeting of the Swatter's Club on April Fool's Day that he would know a lot more about his Razorbacks baseball team the next time the group met.

Van Horn delivered the goods at Monday's Swatter's Club meeting at the Hilton Garden Inn with his usual dose of dry humor and truth bombs.

The Razorbacks have posted a 17-7 record since the last meeting, including sweeps of No. 18 Tennessee and No. 2 Mississippi State; road series wins at No. 15 Auburn and Kentucky; and a just-completed home series victory over No. 15 LSU, a traditional nemesis.

The Razorbacks remained at No. 4 in Monday's USA Today coaches poll. They are 39-13 overall, 19-8 in the SEC West and own a one-game lead over Mississippi State heading into the final weekend of the regular season at No. 19 Texas A&M.

Van Horn gigged his own team a little, bringing up the first game after the last Swatter's Club meeting, a 17-7 loss to the University of Arkansas at Little Rock at Baum-Walker Stadium on April 2 that came on the heels of a home series loss to No. 21 Ole Miss.

"It didn't start out real good against Little Rock," Van Horn said of the 24-game span. "They spanked us all over the field. We can laugh about it now, but we weren't laughing about it then."

Since the last Swatter's Club meeting, Van Horn also witnessed an event he'd never seen before on a baseball field.

The Auburn Tigers created a dog pile on the field, thinking Steven Williams had scored the winning run against the Hogs in the bottom of the 10th inning April 5. Instead, the play was reviewed and Williams ruled out at home on a throw by Arkansas left fielder Christian Franklin.

Arkansas went on to win the game 9-6 in 15 innings on a Heston Kjerstad home run and Matt Goodheart's two-run double.

Van Horn called that victory and the late-inning comeback in a 14-12 victory at No. 6 Vanderbilt the next week two critical moments that have helped the Hogs clinch a bye for the first round of the SEC Tournament next week.

Van Horn said the bye gives the coaching staff some peace of mind.

"It's kind of a relief for the coaches just knowing that we already know the date we're going to play," he said. "We can start setting our pitching up and planning a little bit.

"We know for sure we're going to play two games. If you go there and have to play on Tuesday, it's win or go home. If you lose, you may have a really good club with a lot of wins, but you came in fifth or sixth in the league and you're already going home after one game."

The Razorbacks will face a tough pitching team in Texas A&M (34-18-1, 14-12-1 SEC), though the Aggies will be without their Game 2 starter, left-hander Asa Lacy, who drew a four-game suspension Saturday for his remarks to home plate umpire Ryan Broussard in the fifth inning of a 2-1 loss.

Van Horn said he likes the resume Arkansas has put together, including a No. 6 spot in the RPI rankings.

"We're in good shape," he said. "We've had a good year so far, and we've done what we can do. It's kind of like you can't really worry about those things. We just have to try to get better and win some games."

The Razorbacks have a 10-5 record against teams ranked in the Top 25.