Full bullpen on call for Hogs vs. Aggies 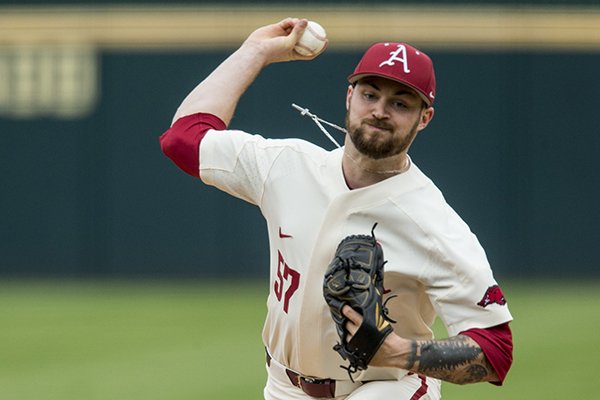 Arkansas pitcher Cody Scroggins throws during a game against LSU on Saturday, May 11, 2019, in Fayetteville.

FAYETTEVILLE -- The University of Arkansas baseball team finally has a completely healthy bullpen going into its final regular-season series at Texas A&M.

It's the first time Arkansas hasn't been missing at least one reliever since Ole Miss took two of three games against the Razorbacks at Baum-Walker Stadium the last weekend in March.

"It feels a lot better than being one or two short," Arkansas Coach Dave Van Horn said. "Because we've been two short a couple of times."

The Razorbacks then had to deal with the loss of redshirt junior right-hander Cody Scroggins -- a starter earlier in the season -- against Auburn and Mississippi State because of arm soreness.

Sophomore right-hander Zebulon Vermillion missed series against Tennessee, Kentucky and LSU because of soreness in the front part of his shoulder.

Van Horn said Vermillion -- who hasn't pitched since throwing a scoreless inning against Northwestern (La.) State on April 23 -- likely won't go more than an inning at Texas A&M and two innings at the most.

"He's usually only a one-inning guy anyway," Van Horn said. "Maybe four or five outs at the most. That's really what we want out of him. He can go in there and bridge it one game."

Van Horn said that ideally he hopes Vermillion (4-0, 3.05 ERA in 20 2/3 innings) can help the Razorbacks get to closer Matt Cronin.

"He's throwing bullpens. He's throwing fine and feels good," Van Horn said of Vermillion. "He was close to being ready to go this past weekend, but ... I didn't even put him on the roster so we weren't tempted to do that. But he'll be ready this weekend."

Scroggins (2-0, 4.62 ERA in 37 innings) held Kentucky scoreless in 1 2/3 innings in his only appearance against the Wildcats, then allowed LSU 2 runs in 2 innings Saturday.

The Razorbacks went 13-5 in SEC play in games with at least one reliever out thanks to strong starting pitching -- especially from junior Isaiah Campbell (9-1, 2.57 ERA) -- and by averaging 7.8 runs. In nine SEC games during that span, they scored nine or more runs.

"Thank goodness our offense kicked it in those weekends or we got good outings from Campbell, who would give us seven-plus innings and get us out to a good lead so we didn't have to burn guys," Van Horn said. "We've had to recycle a couple of guys a couple of times, but it's not the ideal thing to do."

While Arkansas' pitching staff is back to full strength, Texas A&M will be without its No. 2 starter -- sophomore left-hander Asa Lacy -- against the Razorbacks.

Lacy is serving a four-game suspension after being ejected in the fifth inning of Alabama's 2-1 victory over the Aggies last weekend because he was arguing balls and strikes with home plate umpire Ryan Broussard.

Arkansas right fielder Heston Kjerstad served a one-game suspension earlier this season when he was ejected for arguing a called third strike against him. The suspension is longer for pitchers because they don't play every day.

"He's an incredibly well-respected kid and very respectful as well," Childress said. "For that to happen, there's nobody that's more brokenhearted about it than Asa Lacy."

"Well, it's certainly a big loss, but it is what it is," Childress said. "We've got a very deep and talented pitching staff. It's an opportunity for the next guy to step in there and do what he's capable of doing."

Weber has made six midweek starts and 14 relief appearances. In his most recent start, Weber went 5 innings and held Sam Houston State to 1 run, 5 hits and 1 walk with 4 strikeouts in Texas A&M's 15-5 victory on April 30.

"Chris Weber has been as hot as anybody we've had on the mound the last six or seven weeks," Childress said. "He gives us a chance every time he takes the field. He certainly will on Thursday."

"There's just a lot of good pitching in the state of Texas, and A&M is going to get their share. They do a great job recruiting."

WHEN 6 p.m. Central on Thursday

SHORT HOPS Arkansas is looking to close the regular season by winning its fifth consecutive SEC series and eighth overall. … The Razorbacks’ only series losses have been when they went 1-2 against Ole Miss and 1-2 at Vanderbilt. … Arkansas is 11-7 in road games after finishing 6-13 last season. … Texas A&M’s record includes a 2-2 tie against Missouri on March 31 at Blue Bell Park. The game was stopped after 10 innings because of a travel curfew for Missouri.