State of the Hogs: Yurachek coming home to play for Arkansas 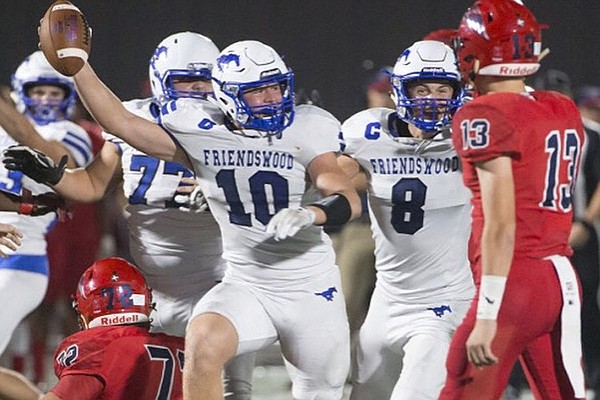 Friendswood linebacker Jake Yurachek (10) holds up a football during a playoff game against Dawson on Friday, Nov. 17, 2017, in Pearland, Texas.

Timing is everything. It may be finally working out for Jake Yurachek.

Yurachek is in the process of transferring from Colorado to Arkansas. He’s got Power 5 experience after using the new redshirt rule to play in mop-up duty last year for the Buffaloes. And, as a walk-on at both schools, he has immediate eligibility and four years to play.

The 6-2, 227-pound inside linebacker is a welcome addition to an Arkansas depth chart that is thin at his position.

The timing didn’t work so well in his high school career. He started as a sophomore and junior at powerful Friendswood, Texas. But it was at outside linebacker, not his natural inside linebacker spot.

Power 5 schools make up their mind between a prospect’s junior and senior season, generally awarding the bulk of their offers before one down is played in their final season of high school.

Yurachek had lots of offers ahead of his senior season at Friendswood, but most of them were because he was also brilliant in the classroom. A 4.0 student who plays at a high level for elite Texas high school programs will have options.

But Yurachek was hearing from Air Force, Army and Navy along with all of the Ivy League schools. There were also plenty of FCS options, but no one in Power 5 called.

“I thought it would still play out well with a Power 5 offer after they saw me play inside linebacker as a senior,” Yurachek said. “But the tape they had was all of me playing as a junior, and my best games were at the end of my senior season." 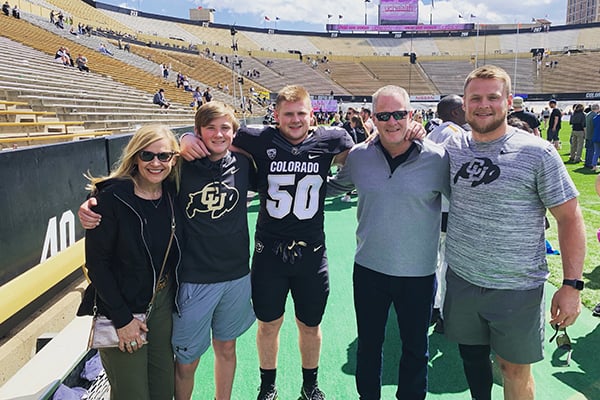 The Yuracheks: (from left) Jennifer, Brooks, Jake, Hunter and Ryan pose for a photo in Boulder.

The Colorado experience started well. He was one of the few true freshmen walk-ons to play, but didn't get many snaps this spring under a new coaching staff. Former Colorado head coach Mike MacIntyre recruited Yurachek. He's now defensive coordinator at Ole Miss.

“I got in some mop-up duty, the most in the New Hampshire game,” Jake said. “I played most of the fourth quarter.

“I actually had quite a bit of playing time and I was one of the few (walk-ons) to dress for home games. The stadium at Colorado is so small on the sidelines, just not many dress out for home games. There just isn't room and there are too many people there. So I was in a unique position that I dressed and did get to play.”

But it didn’t feel right in the spring.

“I don’t have anything harsh to say, but it just didn’t go well and that wasn’t just for me,” Yurachek said. “I decided to look for my best option.”

After entering the new NCAA transfer portal, Yurachek was back where he started, with a lot of FCS offers.

“I believe I can play in Power 5,” he said. “I thought Arkansas was an option, but I waited to see if there were any other opportunities.

“I guess in the back of my mind, I thought it would come down to Arkansas and playing for Coach (Chad) Morris and Coach (John) Chavis. They gave me a preferred walk-on offer when they got here (in December 2017), but I was already thinking Colorado at that point.”

Morris and Chavis were as interested now as they were then.

“I talked to them both last week and that got me excited,” Jake said. “I think my parents are pretty excited, too.”

Yurachek finished finals at Colorado last week and will enroll at Arkansas in the first semester of summer school in two weeks.

“My dad said for me to do what’s best for me, but he did express that it would be nice to have me home,” Jake said. “It makes it hard on him when one (of the sons) is playing somewhere else.”

That was the case with older brother Ryan, an all-conference tight end at Marshall and now with the Oakland Raiders.

“It’s tough on my dad to travel to see us,” Jake said. “His most important days of the year are to be where the Razorbacks play football every Saturday. But he somehow got to games to see Ryan play at Marshall.”

Did he give a recruiting pitch for Morris?

“No, there was no recruiting pitch,” Jake said. “Obviously, he expressed his opinion. When I told him it was here, he was excited. Everyone was.

“It just was the best fit. The (lack of) numbers at linebackers, I knew.”

It's good to know Jake's senior tackle numbers from high school at Friendswood, which plays in one of the toughest districts of Texas high school football. He made 184 tackles, including 45 for losses as a senior. That's making plays.

That earned him Texas District 24/6A defensive player of the year and first-team All-Greater Houston honors from the Houston Chronicle. He was also first team all-state.

“I think my biggest downfall was just that I didn’t play inside linebacker until my senior year,” Jake said. “You look at the all-state team and the All-Greater Houston team, truly I’m the only one on those lists that didn’t get a Power 5 offer.

There were some highlights like a 20-tackle game in the second round of the playoffs against Humble Summer Creek. Friendswood won, 27-26, after a goal-line stand resulted in a botched field goal in the closing seconds.

“We stopped them from the 1-inch line over and over to end the game, three or four straight times,” Jake said. “That’s the game that stands out. It was in NRG Stadium and with a big crowd.

“It was a good game for me. I think I had five or six tackles for losses, some of them on fourth-down plays.”

“He pretty much is a Cam Newton type,” Jake said. “They had 500 yards of offense, but we stopped them on the key plays, on the goal line and on fourth down.

“I thought that game against that caliber of players might get me a Power 5 offer, but it was too late into the process.”

Friendswood fell to eventual 6A, Division II champ Houston Cy-Fair in the next round. 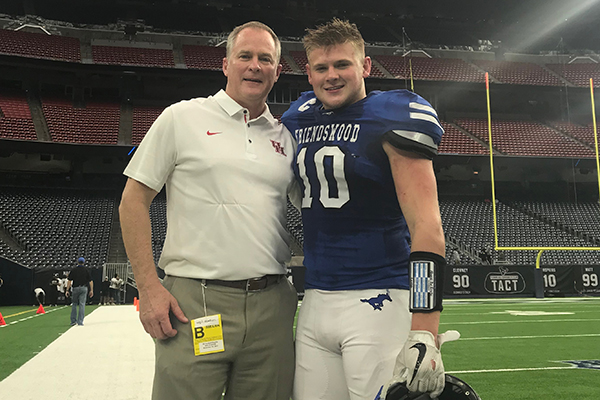 Hunter Yurachek (left) and Jake Yurachek pose for a photo after Friendswood defeated Summer Creek 24-17 on Friday, Nov. 24, 2017, at NRG Stadium in Houston.

Jake followed the Razorbacks every week from the Colorado campus in Boulder. He made the short trip to Fort Collins to watch Arkansas' loss to Colorado State.

The Buffaloes played at Nebraska that day.

“Obviously, that didn’t turn out fun for anyone,” he said. “I didn’t make the road trips (with Colorado) and so I came home for the Tulsa game. That was Homecoming and a lot of fun.

“Basically, I watched the rest of the Arkansas games in my dorm room on my computer. So I saw every game in some fashion.”

And, he watched about everything Arkansas that was possible. He’s a fan of all sports, growing up playing baseball and basketball.

“All three brothers play every sport,” he said. “But we all knew we were going to be football players. (Rising ninth grader) Brooks is playing everything, too, but he’s a football player.”

No doubt, Jake Yurachek is that, too, one with a bit of an attitude right now.

“I’ve got a chip on my shoulder,” he said. “I believe I can play on this level. I think I can play right away at Arkansas. I still take to heart that I was the only one on those (all-state) lists without a Power 5 offer.

“And, I believe in what’s going on here at Arkansas. I am excited to be playing for Coach Morris and Coach Chavis.”