SEC title not focus for Hogs in College Station 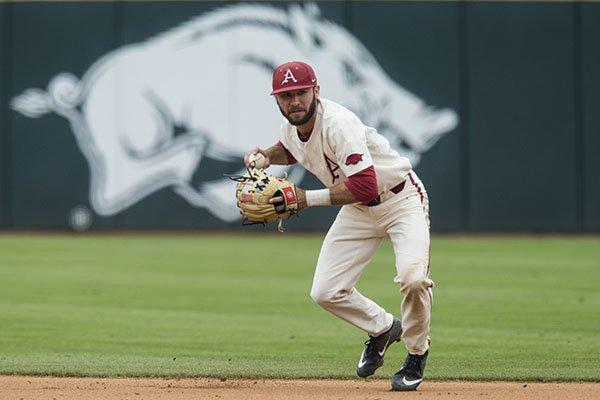 Arkansas second baseman Jack Kenley gets ready to throw during a game against LSU on Saturday, May 11, 2019, in Fayetteville.

FAYETTEVILLE -- The University of Arkansas baseball team finds itself in a four-team race for the SEC championship going into the final weekend of the regular season.

Arkansas junior second baseman Jack Kenley said the players are focused on playing at Texas A&M -- where they open a three-game series at 6 tonight on ESPNU -- rather than being on the verge of winning the SEC championship.

"That's not really what we're thinking about too much," Kenley said. "It's pretty much just winning ballgames.

"Every game is weighted the same in the W column. Obviously, we want to get down to College Station and really get after it."

Kenley paused for a moment when asked what it would mean to win Arkansas' first SEC championship in 15 years.

In addition to Vanderbilt having a one-game lead over Arkansas, the Commodores have a weaker opponent this weekend -- at least based on the standings.

The Commodores are playing at home against Kentucky (7-20) while the Razorbacks are playing the Aggies (14-12-1) on the road.

Texas A&M's incentive to win this weekend encompasses much more than a matchup with SEC West rival Arkansas or senior day festivities associated with the final regular-season series.

The No. 19 Aggies look to be right on the bubble when it comes to earning a host role for an NCAA regional. No. 2 Vanderbilt, No. 4 Arkansas, No. 5 Mississippi State and No. 7 Georgia look destined for hosting duties and possible national seeds, while No. 16 Ole Miss is also in the conversation to host.

A season-ending series victory over the hot Razorbacks would bolster Texas A&M's resume to host, and Coach Rob Childress said he's addressed that possibility with his team.

"Our guys are into it and understand what's going on across the country in the scope of college baseball and where we stand in the rankings and from an RPI standpoint, from a conference standpoint," Childress said. "It's all right there before us. We still don't need anybody's help. We need to go take care of ourselves."

Arkansas senior Trevor Ezell was named Wednesday to the SEC baseball community service team. The graduate transfer from Bryant has been involved in numerous service projects this season, including Christmas gift deliveries to Greenland Elementary, the annual Book Hogs program to promote reading, and a visit to the Veterans Administration hospital on Valentine's Day.

The Razorbacks won two games against Louisiana Tech by scores of 4-2 and 11-0, and lost the middle game of the series 12-7.

"I certainly wouldn't be where I am today without Coach Van Horn," Childress said. "He and his wife and daughters have been lifelong family friends of ours."

Van Horn and Childress have met 20 times as head coaches since 2008, with the Razorbacks having a 13-7 edge.

Arkansas junior pitcher Isaiah Campbell has a WHIP of 0.94 to rank fourth in the SEC, and 24th in the nation.

WHIP is calculated by dividing innings pitched by combined hits and walks allowed. Any number lower than 1.0 is considered excellent.