State of the Hogs: First day of NCAAs doesn't disappoint 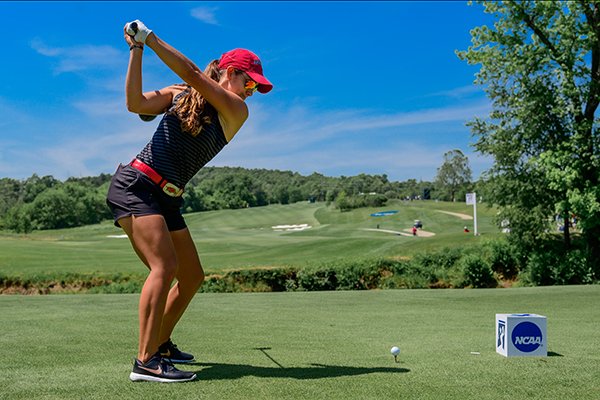 Arkansas senior Maria Fassi prepares to tee off during the NCAA Golf Championships on Friday, May 17, 2019, at Blessings Golf Club in Johnson.

JOHNSON — There are birdies to be had at The Blessings Golf Club. And, the women playing in the NCAA Women’s Championship have the tools to make them.

But one thing is clear after spending some time walking the course on a windy Friday: There are just as many double bogeys (or worse) scattered in what will be one of the toughest challenges ever for this tournament.

You will see great shots. But a gust of wind can steer a well-thought-out approach a few yards the wrong way and a penalty area gobbles up that golf ball.

A veteran coach without a team walking the course laughed out loud when Arkansas ace Maria Fassi’s approach at No. 4 shot up and left in a wind gust. It ended up long and in a penalty area. Fassi did well to make a double bogey.

“It wasn’t,” he said. “She is one of the best in the world, and there is nothing wrong with that shot. It’s just what happens out here. Be patient. It’s happening to all of them, and Maria will be fine.”

And, she was. After starting 3-over par after four, Fassi made four birdies the rest of the way with no bogeys. Her 1-under 72 helped the Razorbacks to a 10-over opening round to share the lead with Texas.

Wake Forest star Jennifer Kupcho kicked her putter after she three-putted the 18th for a 5-over 78. It was one of three three putts on the day. Fassi’s 8-foot birdie putt on the 18th was easy because it came from below the hole.

Kupcho’s first putt on the 18th was a clear indication on what gets you at The Blessings. It was a 40-footer that went over two ridges. It started uphill. It got away from her and scooted 15 feet past. Part of the problem was judging the wind on slick undulating greens.

“Honestly, that’s what was so tough today, the weather,” she said. “It was blowing hard sometimes.

Kupcho’s reputation: one of the world’s greatest putters. She hardly ever three putts.

“I just went through a stretch of 101 holes without a three putt,” she said.

But the bottom line, it was happening to everyone.

“The course is playing really hard,” Kupcho said. “Sometimes you just have to play for par.”

Fifth-ranked Kent State would have taken a few 78s. In fact, the Golden Flashes had only one 79.

They shot 33-over par and were next to last in the 24-team field after only one player broke 80. Top player Caroline Stormo stumbled in with a 13-over 86, despite two birdies. She made a nine on the par-four 11th, a devilish 342-yarder.

Just before that I’d watched three straight Florida women drive into the penalty area or the woods short of the green. That resulted in a string of sixes and sevens.

Here’s the thing: It was the same for every team trying to fight the monster of the course in Johnson. It’s brutal.

I’m told that the women are playing about 6,400 yards. Next week the men will probably play around 7,400 yards. No one talks about this, but the Blessings can be stretched to 7,900 yards.

That won’t be needed this time of year. There’s been enough rain in the last few weeks to leave the course lush and soft. There isn’t a lot of roll, even for the players who turn over a hook.

But the greens are perfect, although fast. That’s where the real trouble lies. Arkansas coach Shauna Taylor said the speed of the greens would be 11 on the Stimpmeter.

She’s seen them faster and the course tougher. "Carnage" was the word coach after coach used to describe what they had seen from their team. Told that, Taylor had a hard time suppressing a smile.

“We know it’s hard, so we are forgiving of each other,” Taylor said. “We know to expect extremely tough conditions.”

I’ve covered plenty of tournament golf. It’s a fair setup with wide fairways. Some are 80 yards wide. Yes, there are bunkers that can make the landing area tight. But patience is required.

What makes The Blessings extra tough are the angles from the tees. Picking the starting line for your tee shot is critical, and none are easy. I saw players backing off tee shots over and over, and asking their coach for help on that task.

It’s a fun walk, to be sure. Come to The Blessings. It’s free this weekend, all the way through Wednesday’s match play final. The men start in one week, with another six days of free golf.

When they finish, it will be a relief for the players. No one will blow The Blessings away, and I know there is great talent in these two fields.

Someone who watched the NCAA Tournament last year at Karsten Creek in Stillwater, Okla., thought that was a brutal layout, but they said it’s not nearly as tough as The Blessings.

I walked around The Blessings on Friday guessing at what trouble I’d find and how many balls I’d lose. I came up with a cool dozen spots sure to provide doom.

How anyone would handle the greens is another story. Three putts are everywhere. You can go for a putt on a downhiller and end up in a fairway valley below the green.

The winning scores are going to be way over par. How much will be determined by how the wind blows. It was gusting at 10 to 15 mph Friday, and that’s pure death for the delicate approach shots for the topsy-turvy greens.

It’s fun to see the course, and while there are some ropes to keep you away from the greens, there really aren’t any marshals to make you nervous about cutting across in your hikes through the carnage. Yes, there’s that word again.

That’s probably not a nice way to talk about a championship tournament, but I don’t have any complaints. It should be tough. The harder the course, the more chance to find a true champion.

When it’s over, The Blessings will be probably be crowned champion. I don’t think anyone will beat it over the next two weeks.