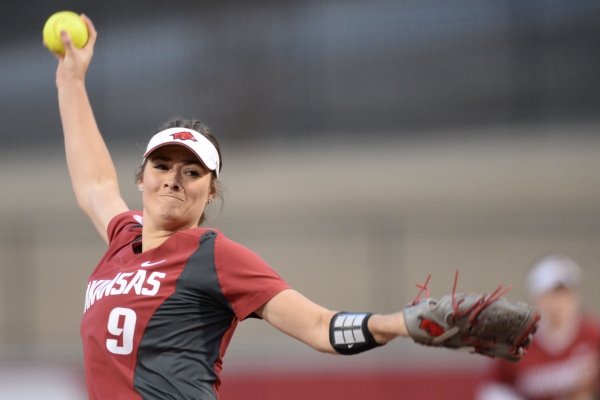 Arkansas starter Autumn Storms delivers a pitch against Southeast Missouri Thursday, Feb. 21, 2019, during the fourth inning at Bogle Park on the university campus in Fayetteville.

It was two-and-done for the University of Arkansas softball team in the NCAA Tournament.

BYU beat the Razorbacks 6-3 on Friday at Cowgirl Stadium to eliminate Arkansas from the Stillwater (Okla.) Regional.

The Razorbacks, who lost to Tulsa 5-0 in their regional opener on Thursday, ended the season with a 38-20 record. They lost their final three games, including 4-1 to Georgia in the SEC Tournament.

Arkansas pulled within 5-3 against BYU in the fifth inning on senior second baseman Haydi Bugarin’s three-run home run down the left field line, but that was the extent of the Razorbacks’ scoring.

BYU junior left fielder Rylee Jensen hit her second home run of the game with two outs in the sixth inning to make it 6-3.

Sophomore Autumn Moffit (13-11) pitched a complete game for the Cougars and held the Razorbacks to 5 hits and 1 walk with 5 strikeouts.

Storms went all 13 innings for the Razorbacks in the regional because sophomore right-hander Mary Haff was sidelined by a knee injury. Haff has a torn anterior cruciate ligament, an Arkansas spokesman confirmed.

It was the 15th consecutive NCAA Tournament appearance for BYU (30-26) while the Razorbacks were making their third consecutive appearance — a first in the 23-year history of Arkansas’ program.

BYU took a 2-0 lead in the first inning on Ari Paulson’s two-run single that scored Ashley Godfrey and Erin Miklus.

Jensen led off the third inning with a home run to push the Cougars’ lead to 3-0. BYU added two more runs — both unearned with two throwing errors by third baseman Nicole Duncan — to make it 5-0.

Arkansas played in the NCAA Tournament for the ninth time in 23 years since adding softball as a sport.

Tulsa beat BYU 6-4 Friday night to eliminate the Cougars. The Golden Hurricane will play host to Oklahoma State today for the regional championship, needing to beat the Cowgirls twice.