Prep ranking means nothing to NBA 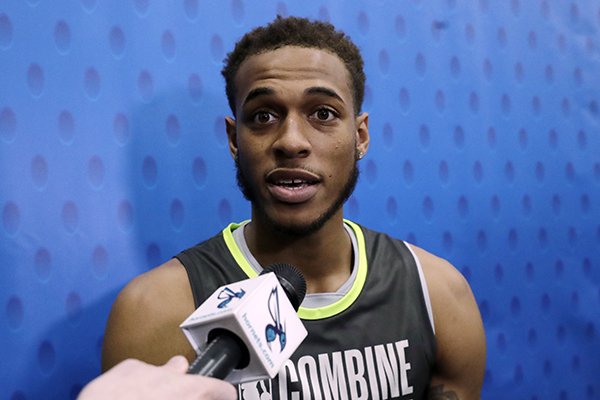 Daniel Gafford speaks with the media during the second day of the NBA draft basketball combine in Chicago, Friday, May 17, 2019. (AP Photo/Nam Y. Huh)

When the NBA lottery concluded last week, many started looking toward the June 20 NBA Draft, including thousands of high school prospects dreaming of their time to get selected.

ESPN national director of recruiting Paul Biancardi talks to high school prospects, parents and coaches on a regular basis. He also communicates with numerous people in NBA front offices as the draft gets closer.

"I talk to so many scouts, assistants GMs and GMs, and the disconnection from those conversations is really far and wide because of how the NBA looks at players and how the players look at themselves in high school are totally different," Biancardi said.

A very select few make it to the NBA, but many highly ranked prospects don't see it that way.

"Players that are ranked think they're going to be NBA players some day, or players looking at colleges based on how they can get to the pros have a early, warped idea of how this works," Biancardi said. "The NBA tells me all the time there might be two or three guys in every draft that can be stars in the league. Maybe."

While numerous prospects see themselves becoming the next LeBron James, Kevin Durant, Steph Curry or James Harden, reality is they'll be lucky to make an NBA roster.

"There are probably a handful of guys that will be starters and the rest will be rotation guys," Biancardi said. "That sixth, seventh and eighth man, and then after that they're role players. A shooter, an assist-maker, a defender, a rebounder.

"So you might of been top 20 in your high school class, you maybe lucky if you can be a role player in the NBA."

Newly signed University of Arkansas big man Connor Vanover plans to report to Fayetteville on May 28 to begin his career as a Razorback.

Vanover, 7-3, 225 pounds, averaged 6.8 points, 2.9 rebounds and a block shot in 16.4 minutes as a freshman at California this past season. He plans to file for a waiver for immediate eligibility, citing his grandmother's failing health.

When he does step on to the court at Bud Walton Arena for his first game, Vanover is planning to be stronger and bigger.

"My best friend needs to be the strength coach, just to get bigger and stronger," Vanover said. "I'll definitely try and get as much muscle mass as I possibly can, but it's kind of hard to just pin a number. It's just really hard to tell. It's just kind of the way the body is.

"I'm still growing and getting stronger, so the weight is going to go steadily up. I can't just put a number down and say I want to be 240 because I may not get that the next two years or I may get it by next year."

ESPN rated Vanover a three-star prospect and the No. 43 center while a senior at Findlay Prep in Nevada. He recorded more than 1,000 points, 700 rebounds and 300 blocks with Baptist Prep the previous three seasons.

He believes 235 pounds might be a good playing weight.

"I'm just trying to be as strong and mobile as possible," Vanover said. "I think a good weight number would be like 235, but I really don't know how possible that is just to slap a number and say get to it because I'm just trying to stay strong, stay conditioned and be able to play while also gaining weight."