Duke blitzes field in 2nd round 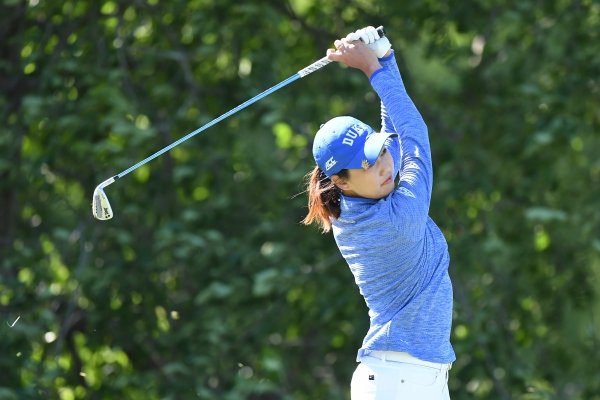 Image from Sunday May 19, 2019 during the NCAA Women's Championship at the Blessings Golf Club in Fayetteville.

FAYETTEVILLE -- As the second round of the NCAA women's golf championship wrapped up Sunday in near-perfect weather conditions, the top of the leader board remained unchanged.

Duke, which had Sunday off save for a couple of players, managed to open a nine-stroke lead with all five of its players finishing under par in the second round.

The No. 3 Blue Devils sizzled with a second-round, 11-under-par 281 -- 24 strokes better than their opening-round 305 -- and will carry a nine-stroke lead over No. 1 Southern California into today's third and final round of stroke play at Blessings Golf Club.

First-round co-leader Texas tumbled back to third at 12 over after the second round. The Longhorns shot a 294, which was an eight-stroke improvement but no match for Duke's second-round assault. Arkansas and Arizona are tied for fourth at 14 over.

Because of severe weather in the region Saturday which resulted in a majority of play being suspended for the day, the stroke-play portion of the tournament was shortened to 54 holes and will wrap up today with all 24 teams and 12 individuals competing. The individual champion will be decided today and the top eight teams will advance to match play on Tuesday.

Golfers will hit the course at 7 a.m. today with Arkansas golfers teeing off beginning at 11:55 a.m. on No. 1.

Before the storms hit Saturday, Duke dominated with three of its golfers completing their rounds. On Sunday, the weather could not have been more perfect under sunny skies and temperatures in the high 70s.

"I'm really proud of our girls," Duke Coach Dan Brooks said. "We got into some tough spots on Day 1 that had nothing to do with the way the course was set up, but they've done a really great job learning and getting it done in round two."

Brooks said a number of factors played a role in the lower scores.

"I've talked to the players and it's a combination of things," Brooks said. "I think the takeaway from it is to realize that a little bit of adjustment on the course here and there can make a huge difference. We've seen the courses in the NCAA championships run a score way up, and it may not take much to make it a very different situation. You move the tees up to the front of the tee box instead of the back, and you set the pins on certain holes a little more forgiving, and you can change the scoring completely.

"I think that's what we've seen here. Some alterations were a little more aggressive than others, and it's changed the scoring. Also, the good players are going to learn day by day and there's a lot of that going on as well."

Ana Belac led the charge for the Blue Devils with a 69 and is tied in fifth place at 1-under 145. Belac shot a 76 in the first round. She is one of three Blue Devils in the top six along with Jaravee Boonchant and Miranda Wang, who are tied for sixth at 1 over.

"I think that we are all more familiar with the course," Belac said of the second-round surge. "It's been playing really tough, so having another round under your belt and knowing where to hit your shots means a lot."

Purdue moved into seventh in the team standings after a 294 on Sunday, an 18-shot improvement over the opening round. Boilermakers Coach Devon Brouse said shortening the tees made a big difference, but the greens were still very fast despite the Saturday's rains.

"This is just my opinion, but you don't need to make these greens so lightning fast," Brouse said. "This is a great golf course. There is plenty of test."

Florida's Sierra Brooks is atop the leader board in the individual race after firing a 6-under 67 for her second round. Brooks holds a one-shot lead over both University of Arkansas' Maria Fassi, who shot a 71 on Sunday, and Bianca Pagdanganan of Arizona, one of just a few who saw their second-round score balloon with a 3-over 74 after shooting a 69 on Friday. Purdue's Inez Wanamarta is two shots behind Brooks.

Brooks' second round featured seven birdies before she bogeyed the par-3 17th to finish 6 under for the day.

"I'm really pleased with the way I've been playing, and my course management has been good," Brooks said. "I'm not hitting exactly the way that I would like, but I know where my misses are."

Brouse, who has been the Boilermakers' coach for 21 years, said he was proud of the way his team scrapped Sunday to remain in contention although No. 18 yielded a couple of bogeys to Purdue. Brouse said Duke's strong second round was impressive.

"You look at Duke's round, five players under par, they are 11-under par," Brouse said. "That's one of the best rounds I've ever seen in college golf.