Race tight in fight for medalist 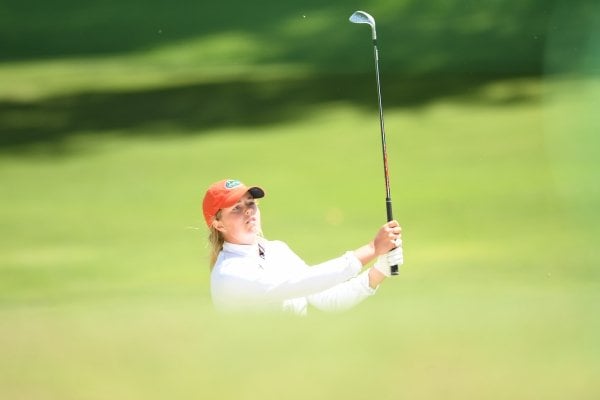 Image from Sunday May 19, 2019 during the NCAA Women's Championship at the Blessings Golf Club in Fayetteville.

FAYETTEVILLE -- Florida junior Sierra Brooks put together the best round the Blessings Golf Club is likely to see during championship week.

It took two days to complete, but Brooks wrapped up a sizzling second round with a 6-under 67 on Sunday morning to take the lead at the NCAA women's golf championships.

Brooks, the No. 41 player in the collegiate ranks, wrapped up her second round with birdies on Nos. 6, 8 and 9.

She'll take a one-stroke lead over University of Arkansas senior Maria Fassi and Arizona senior Bianca Pagdanganan into the final round today. Purdue's Inez Wanamarta, coming off a round of 70, is in fourth at 2 under, and Duke's Ana Belac, who shot a 69 in round two is alone in fifth place at 1 under as the only other player in the red.

"It was different from what we're used to," Brooks said of splitting her round over two days. "Coming back out, I was able to pick back up on my momentum so that was nice."

Brooks said the conditions played a role in her hot second round.

"I think the pins were in some easier locations this time, so having a round under your belt and understanding how to play the course really helps."

Brooks had seven birdies and one bogey in her round, which was two shots better than the previous best scores of 69 at the championship, carded by Pagdanganan and Texas freshman Hailee Cooper.

Fassi, paired with Brooks in the second round, carded a 2-under 71.

"I know Sierra is doing well and we're probably going to be pretty close, but again I was trying to make as many birdies as I could," Fassi said.

"Sierra is a fantastic player," Taylor said. "She and Maria are buddies, so I'm not surprised that they could feed off each other. When you see good golf shots, it sometimes breeds good golf shots from others."

Brooks will be paired in today's third round and a scheduled 8:50 a.m. tee time on No. 1 with Illinois' Bing Singhsumalee and Florida State's Frida Kinhult, who entered the championships as the No. 1 ranked collegian. Fassi is scheduled to tee off on No. 1 at 12:39 p.m. with Pagdanganan and Stanford's Albane Valenzuela.

"It's really exciting, but again, I'm most focused on helping the team," Fassi said of being in contention for the title.

"I'm pretty satisfied with the way I've played," Pagdanganan said. "I didn't expect the first round to go as well as it did. I'm just trying to stay in the zone and take it shot by shot."

The No. 10 Razorbacks will open the final round of stroke play tied for fourth place with No. 4 and defending-champion Arizona at 14 over par.

Arkansas and Arizona are paired with No. 7 Stanford today, and those teams will go off the No. 1 tee starting at 11:55 a.m.

Maria Fassi led the Razorbacks with a 2-under 71 in the second round, followed by Kaylee Benton (73), Brooke Matthews (76) and Ximena Gonzalez (76). Senior Dylan Kim had the non-counting score of 82.

The NCAA golf committee elected to shorten the women's championship to three rounds of stroke play after severe weather delayed the completion of Saturday's second round.

That means the individual medalist will be determined after today's round and the top eight teams will begin match play Tuesday as scheduled.

"With the severe weather threats that we monitored throughout Saturday afternoon, our committee came to the determination that, given the conditions, shortening the tournament to three rounds of stroke play heading into match play was needed to maintain the overall student-athlete experience and the integrity of the championships," said committee chairman Ryan Colton in a statement issued late Saturday. "We're looking forward to the next two days of stroke play, where we have the opportunity to crown the individual champion, as well as determine the eight teams advancing to match play, which will begin Tuesday morning."

The par 3s and 4s have been difficult and the par 5s a little more manageable through two rounds at the NCAA Championships at Blessings Golf Club.

Blessings has yielded 11 eagles, including two by USC's Amelia Garvey.

Arkansas' Maria Fassi began the resumption of her second round Sunday with two bogeys on her first three holes, on Nos. 3 and 5. The senior from Hidalgo, Mexico, got them back with an eagle on No. 7 and finished the round at 2-under 71. She's one shot off the lead heading into the final round of stroke play today.

"Of course, I was pretty excited about that eagle that got me back to even for the day," Fassi said. "I had good looks on 8 and 9 and wasn't able to make them, but it was a pretty good finish, and I'm excited about what's coming tomorrow."

Only No. 22 Purdue and No. 30 Ole Miss from the teams who played their entire second rounds Sunday are in the top 12.

The Boilermakers carded a 2 over and are alone in seventh place (22 over), while the Rebels are in 11th at 27 over after a 5-over round Sunday.

"They were tough today," Purdue Coach Devon Brouse said of his team. "We were four-legged both days because we've got one player who's in last place in the tournament.

"They were at 4 over midway through the front nine, not really making any birdies. They fought it back to even par. We had a couple of bogeys here at the last hole that cost us a couple of shots."

Ole Miss is used to having to battle lately. The Rebels had to claw into the eighth spot at the SEC championships before taking the title with three victories in match play. They also had to scramble to grab the sixth and final spot at the NCAA Norman Regional to make it to Fayetteville.

"The girls have been through a lot of stressful situations in the last few weeks," Ole Miss Coach Kory Henkes said.

"We had a great front nine and that kind of helped us get prepared for the back nine, because that back nine can be a little treacherous out here, as you've seen from the scores. Really proud of them for just grinding it out and having all the rain delays yesterday and taking the day off yesterday. It was great to see some great golf today."