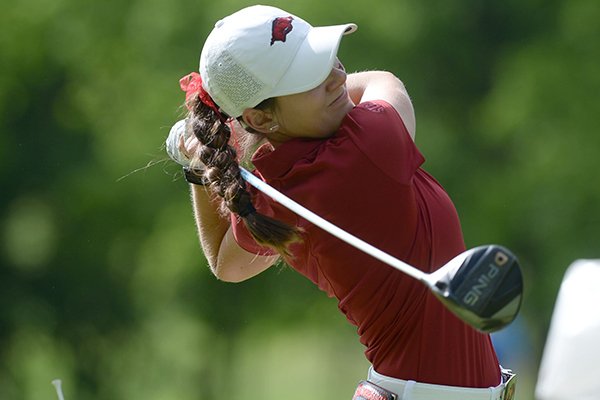 Kaylee Benton of Arkansas watches her tee shot Tuesday, May 21, 2019, on the 15th tee box during her match with Jennifer Kupcho of Wake Forest in the Women's NCAA Golf Championship at Blessings Golf Club in Fayetteville.

FAYETTEVILLE — Arkansas' 2019 season has come to an end on its home course.

The Razorbacks lost 3-2 to Wake Forest in quarterfinal match play at the NCAA Women's Golf Championships at Blessings Golf Club on Tuesday, nearly 12 hours after the teams teed off at 8:30 a.m.

Wake Forest's Jennifer Kupcho and Siyun Liu each birdied the final hole - the par-4 ninth - in a matter of minutes to record 1-up victories over Arkansas' Kaylee Benton and Dylan Kim, and give the Demon Deacons their second and decisive third point.

Kupcho held off a late rally by Benton, who trailed by three holes with four holes to play. Benton birdied the par-3 eighth to force Kupcho to a final hole in their pairing.

Liu was the story of the afternoon for the Demon Deacons. Trailing by one hole through 15, Liu birdied her final three holes to defeat Kim 1-up. Kim birdied the ninth to force a good birdie putt by Liu from about 2 feet away.

Arkansas went ahead 2-1 after Maria Fassi defeated Vanessa Knecht 2&1. Fassi, who won the individual NCAA championship Monday, overcame a 1-down deficit through 12 holes to defeat Vanessa Knecht 2&1 and give the Razorbacks their second point.

Fassi won the 13th, 14th and 15th holes to regain the advantage.

The Razorbacks and Demon Deacons were paired in the No. 4 vs. No. 5 matchup. Arkansas finished the 54-hole match play at 24 over, two shots better than Wake Forest.

The quarterfinals were delayed by six hours because of rain and lightning.

Players were taken off the course at 10:15 a.m. because of lightning. They nearly restarted at 1:15 p.m., but more lightning postponed the the tournament for three more hours until a 4:15 p.m. restart.

The Demon Deacons advanced to the semifinal round Wednesday, where they will face Auburn. The Tigers defeated Texas 3-2 in the quarterfinals.

Because of the delays, the semifinals were not able to be played Tuesday, as scheduled.

The winner will advance to a second match play Tuesday afternoon in the semifinals. A team champion will be crowned following a final-round match play Wednesday.

The other pairings Tuesday at Blessings are Southern California vs. Arizona, Duke vs. Stanford and leader Texas vs. Auburn, which advanced to match play by finishing up its final round of stroke play early Tuesday morning.

The Razorbacks finished the 54-hole stroke play in fourth place at 24 over, two strokes ahead of the Demon Deacons in fifth place. Arkansas and Wake Forest golfers will tee off between 8:30 a.m. and 9:10 a.m. on the 10th hole.

Fans will not get to see a rematch between the nation's top two female amateurs, Jennifer Kupcho of Wake Forest and Maria Fassi of Arkansas, who are close friends and thrilled the gallery at the Augusta National Women's Amateur last month in Georgia. Kupcho charged on the back nine and won the first-ever women's tournament at Augusta, four strokes ahead of Fassi, who had a final-round lead.

Fassi won the individual NCAA championship by four strokes after shooting a round of 5-under 68 on Monday. Kupcho was the NCAA champion last year.

Arkansas' Kaylee Benton is paired against Kupcho in the anchor position. Fassi will tee off at 9 a.m. with Wake Forest's Vanessa Knecht.