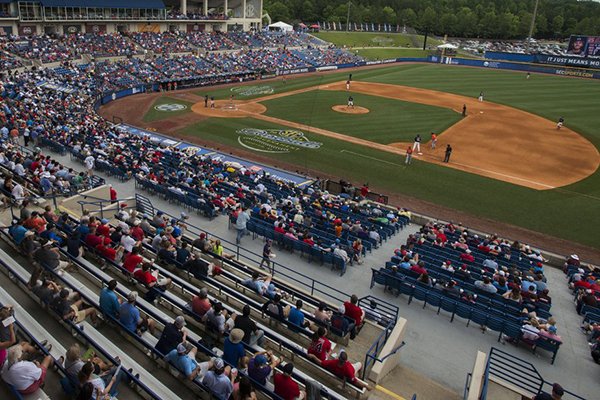 Hoover Metropolitan Stadium is shown Wednesday, May 23, 2018, during the SEC Tournament in Hoover, Ala.

TELEVISION The game will be aired on SEC Network. All games can be accessed on the ESPN app and ESPN3.com. (Carrier login required).

WEATHER According to the National Weather Service, it will be sunny with a high of 92 degrees Wednesday in Hoover, Ala.

NOTABLE Ole Miss defeated Missouri 2-1 in a single-elimination game Tuesday to advance to the double-elimination portion of the tournament. Neither Arkansas nor Ole Miss will be eliminated with a loss….Arkansas-Ole Miss is paired against a game between Georgia and Texas A&M in the upper half of the tournament bracket. The Aggies and Bulldogs are scheduled to play at 9:30 a.m., Wednesday, and the Arkansas-Ole Miss game will follow 30 minutes after its conclusion….Arkansas is the No. 2 seed in the SEC Tournament despite having one less conference win than No. 3 seed Georgia. Division champions are automatically seeded Nos. 1 and 2 at the SEC Tournament, and the Razorbacks are considered the SEC West champion by virtue of its series sweep of Mississippi State. Arkansas and Mississippi State tied for the division championship at 20-10 apiece….Ole Miss coach Mike Bianco moved into third place in all-time wins by SEC coaches earlier this season. Bianco trails former Mississippi State and Georgia coach Ron Polk and former LSU coach Skip Bertman. He passed former South Carolina coach Ray Tanner for third place….Arkansas has advanced to the weekend at the past two SEC Tournaments. The Razorbacks lost to LSU in the semifinals of last year’s tournament and lost to LSU in the championship game in 2017. Arkansas has never won the SEC Tournament….Ole Miss is the defending SEC Tournament champion….Arkansas starter Patrick Wicklander faced five batters but recorded only one out during a 10-5 loss to Ole Miss on March 31. Wicklander allowed two runs on two hits and two walks….Ole Miss starter Zack Phillips was the winning pitcher against Arkansas on March 31. Phillips retired two hitters and allowed one run in relief. Phillips grew up in Texarkana, Ark., but attended Texas High School.