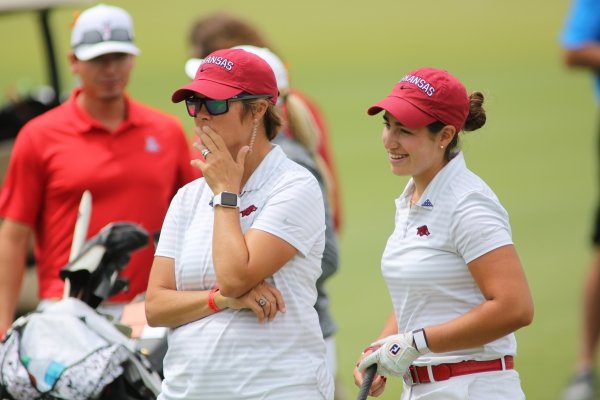 Monday, May 20, 2019, on the first hole green during the NCAA women's golf championship Monday the Blessings Golf Club in Johnson.

FAYETTEVILLE -- The No. 10 Arkansas Razorbacks started hot in the third round of the NCAA championships on Monday, but windy conditions on the back nine kept them from moving up the leaderboard at Blessings Golf Club even while senior leader Maria Fassi was claiming the individual title.

The Razorbacks finished with a 10-over 302, matching their first-round score. Their team total of 24 over is currently in fourth place and very likely to set up a match play meeting with Wake Forest today.

University of Arkansas Coach Shauna Taylor said the wind and the course setup on the Razorbacks' home course Monday were as difficult as she can recall.

"This golf course played as tough as I've seen it in a very long time, maybe ever with 30 mph winds," she said.

Fassi fired a 5-under 68 for the day's best round, one shot ahead of Texas' Hailee Cooper.

"I'm not so worried about Maria. It's the other four that I was trying to get in the house moreso," Taylor said when asked about her feelings late in the round. "She thrives when the spotlight is on, and that's what she did today."

The Razorbacks also got a 1 under from senior Dylan Kim, her best round of the tournament. Kim is currently tied for 66th place.

Senior Kaylee Benton carded a 7-over 80, her worst score of stroke play, and fell into a tie for 27th at 8 over after starting the day tied for sixth at 1 over.

Sophomore Brooke Matthews had a 9-over 82 and finished at 15 over, tied with Kim.

Freshman Ximena Gonzalez had a 12-over round and completed stroke play at 30 over, currently tied for 125th.

No. 2 Texas powered up the leaderboard Monday with the day's best round at 6 under with one hole left to complete.

"That was a great round that we played," Texas Coach Ryan Murphy said. "We got off to a good start and played No. 1 well, which is a really hard hole. I think that just kind of started our day. That was great to have four pars on that hole, and then we made a couple of birdies on 2, and we were off to the races."

The Longhorns were led by freshman Hailee Cooper, who shot a 4-under 69 for the second consecutive day.

"That was just two moving days for her that were huge," Murphy said. "That's incredible to start with 80 and then finish fourth in this golf tournament. Just fantastic."

Wake Forest senior Jennifer Kupcho, the defending NCAA individual champion, was likely out of contention for medalist honors after firing a 5-over 78 in Friday's opening round.

But the reigning Augusta National Women's Amateur champion showed her grit by rebounding with a 1-under 72 on Monday to stand in a tie for 22nd, and more importantly, lead her team into match play today.

The No. 6 Demon Deacons will almost certainly face No. 10 Arkansas on the Razorbacks' home course in a match play quarterfinal this morning.

Central Florida freshman Elizabeth Moon is one of two players from Arkansas in the NCAA field. Moon, the 2017 Arkansas High School girls champion and a semifinalist at the 2017 USGA Junior championship, went to Forrest City and practiced most frequently at RidgePointe Country Club in Jonesboro and on courses in Memphis.

Moon finished her tournament with a 6-over 79 on Monday. She is at 11 over and tied for 43rd in the current standings.

"This was a surreal experience for me," Moon said. "I enjoyed every little part of it. I'm beyond blessed to even be here.

"I had a successful spring season. Didn't finish the way I wanted to at nationals here, but it was such a great experience for me."

Moon said she enjoyed her visit to the UCF campus in Orlando, Fla., as a recruit.

"I honestly just fell in love with the Florida weather and it's been great since then," said Moon, who added that her family has relocated to Orlando.

Monday's round at the NCAAs was deemed a "Salute to Service" Day. Each player on the course was given a fallen member of the U.S. military to play in honor of, and all of the pins featured a U.S. flag rather than the Blessings' dove logo.

Each hole also featured the picture and details of a service member who has died in action.