Down to the wire: Matthews, Arkansas upended in match play 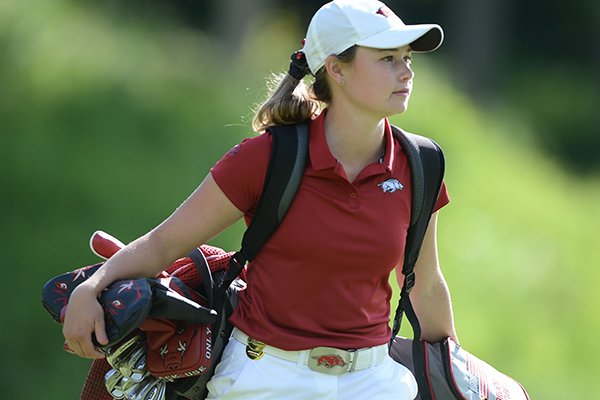 Arkansas freshman golfer Brooke Matthews carries her bag during the NCAA Women's Golf Championships on Tuesday, May 21, 2019, in Fayetteville.

FAYETTEVILLE — Wake Forest junior Siyun Liu threw her hands up in celebration and shouted after sinking a short 3-foot putt to push the Demon Deacons into Wednesday’s match play semifinals at the Blessings Golf Club.

“I did it!” she yelled toward her teammates standing off the green on the ninth hole. “I did it!”

In sinking her putt, Liu effectively ended Arkansas’ season, holding off a late push from Razorbacks senior Dylan Kim, who held three leads throughout her round, including a one-hole advantage with three to play.

“(Liu) celebrates a lot, but I don’t know to that level. I don’t know if I have seen her quite be that happy with what was going on,” first-year Wake Forest coach Kim Lewellen said. “She is the most entertaining person that you will ever be around and she is like that 24/7 - all the time.

“A lot of our players and our team feed off of that and her energy and it can be contagious and can be helpful during this time.”

Shortly after Liu's putt, Demon Deacons senior and 2018 NCAA individual champion Jennifer Kupcho put the finishing touches on Wake Forest's quarterfinal win. Kupcho defeated Arkansas senior Kaylee Benton, who fell into three-hole deficits twice on the back nine and applied late pressure with birdies on her final four holes, forcing the top-ranked amateur player in the world to be precise.

"I thought we were in a tough spot (coming out of the six-plus hour rain delay). We came back and battled," Arkansas coach Shauna Taylor said. "Dylan and Kaylee just battled. They’re warriors."

Following a less-than-ideal start Tuesday, Brooke Matthews, a redshirt freshman from Rogers, completed the individual comeback of the day for Arkansas, erasing Wake Forest's Letizia Bagnoli's three-hole lead in a span of five holes. Matthews parred the par-4 fourth and birdied the par-5 fifth to take her first lead of the day with four holes to play.

She held that lead through 16 holes before Bagnoli hit a hole-in-one on the par-3 eighth. She didn’t let it rattle her heading into the final hole, though. On the ninth, Matthews confidently stuck her 88-yard approach within 2 feet of the pin.

“Going into the wind I knew that it would spin off the hill if I hit it a little long, so that was our plan," Matthews said after securing Arkansas’ first point. "Luckily I did it."

Maria Fassi, the first player to win medalist honors on her home course since New Mexico’s Caroline Keggi in 1987, said she was extremely proud of Matthews' effort Tuesday and added that the freshman has a personal drive that is rare.

Matthews improved to 5-0 in match play for the season.

"You don’t see that very often with seniors or juniors or anything," Fassi said. "Seeing her react that way under so much pressure as a freshman tells you what kind of player she is, what kind of person she is. She’s got great things ahead and I can’t wait to see all the things she accomplishes."

In terms of her own play in the quarterfinals, Fassi said she was still feeling the effects of an emotional Monday and started the day slow before defeating Vanessa Knecht 2&1.

Fassi trailed by one through 12 holes.

"I was tired and sore from last night," Fassi added. "I was able to come back and help the team win a point. We fell a little short of our goal, but I’m extremely proud of the fight we showed out there."

Wake Forest's other match play winner was sophomore Emilia Migliaccio, who defeated Arkansas' Ximena Gonzalez 6&4. Migliaccio won the first three holes and cruised, never leading by fewer than two holes the rest of the round.

Other teams advancing to Wednesday’s semifinal round are defending national champion and No. 6 Arizona, which edged No. 3 Southern Cal 3-2, No. 2 Duke and No. 8 Auburn, which rallied late into the evening to upset Texas 3-2.