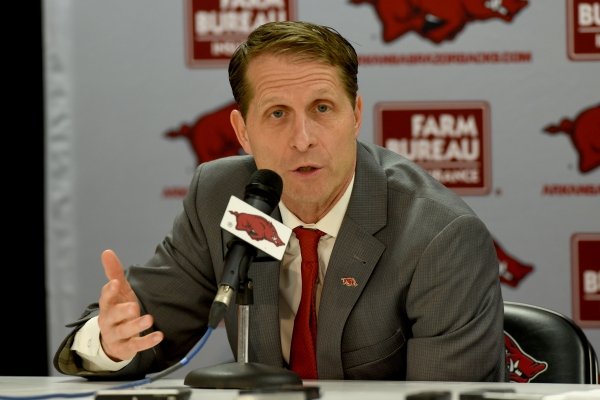 University of Arkansas Coach Eric Musselman and staff are expected to host forward Che Evans Jr. for an official visit on June 8-9.

Evans, 6-6, 207 pounds, originally had announced a top six of Ohio State, TCU, UCLA, Texas Tech, Boise State and Florida. A lot has happened since then, with Musselman being hired at Arkansas and another coaching getting let go.

"My original final six included UCLA before Coach [Steve] Alford was let go," Evans said. "When I heard Coach Musselman had taken the Arkansas job, I asked my AAU coach to reach out and see if I was on their radar. My AAU coach already knew Coach Musselman, so after he got settled as head coach he started recruiting me."

"I was 5 of 6 from the field," Evans said. "They liked that I can shoot it, and they liked my athleticism."

He received his offer from Arkansas on May 8. Musselman's history of coaching twins Caleb and Cody Martin at Nevada is a plus for Evans and helped the Razorbacks make up for lost time on the recruiting trail.

"They know I'm a dark horse top-40 talent, and he loves scoring wings if you watched him coach the twins at Nevada," Evans said. "Just so happens he took an attractive job in the SEC conference, and I would love to match up against Kentucky and others.

"The attraction for me are coaches who love natural scorers and teach defense. That's why Arkansas and Boise State, Oregon State ... are on my final list."

How to get noticed

One of the frequently asked questions by football parents and athletes in recruiting is how to get noticed by college coaches. My best advice is to attend college camps during the summer and let the coaches see the athlete firsthand.

Coaches do most evaluations by video, but they may need to see more of a prospect in drills and one-on-one sessions before deciding whether to extend a scholarship offer or not. Coaches also like to test prospects in the 40-yard dash, vertical jump, standing broad jump and other ways to gauge athletic ability.

Few athletes are Division I caliber, so parents need to be reasonable about their child's athletic ability. The best source to get an educated opinion of an athlete's ability is to ask the high school coaches. They can form a good opinion of an athlete based off their experience and communication with college coaches.

Another piece of advice is to start attending camps at the earliest age possible. That allows the athlete to get on the radar of college coaches while also developing relationships.