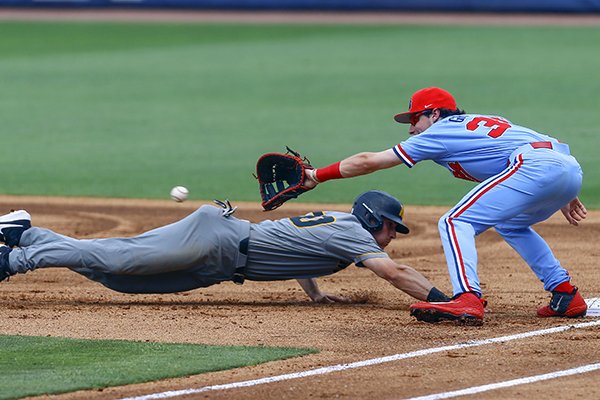 Missouri's Kameron Misner dives back to first base ahead of the throw to Ole Miss first baseman Kevin Graham during the first inning of the Southeastern Conference tournament NCAA college baseball game, Tuesday, May 21, 2019, in Birmingham, Ala. (AP Photo/Butch Dill)

FAYETTEVILLE — Arkansas will play Ole Miss on Wednesday on the first day of double-elimination play at the SEC Baseball Tournament.

The game is scheduled to begin at approximately 1 p.m. It will follow the completion of a game between Georgia and Texas A&M at Hoover Metropolitan Stadium in Hoover, Ala.

The No. 23 Rebels defeated Missouri 2-1 on Tuesday in a single-elimination game. Ole Miss (34-23) scored both of its runs in the fifth inning on Thomas Dillard's RBI double to tie the game and Cole Zabowski's RBI single to take the lead.

Ole Miss entered the game having lost six of its previous seven games against Mississippi State, Arkansas State and Tennessee.

Arkansas lost two of three games to Ole Miss during the regular season on March 29-31 in Fayetteville. The Razorbacks defeated the Rebels 5-3 in the series opener, but dropped the final two games of the series by scores of 4-3 and 10-5.

The series loss was Arkansas' only at home this season.

Wicklander allowed 2 runs after allowing 2 hits and walking 2 of the 5 Ole Miss batters he faced in relief on March 31.

Phillips allowed 1 run on 2 hits and 1 walk in a 2/3-inning relief appearance in the series finale against Arkansas.

Arkansas (40-15) had a first-day bye at the tournament after sharing the SEC West division championship with Mississippi State.