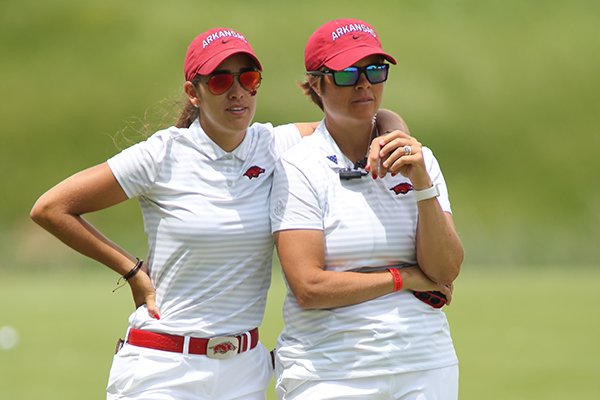 FAYETTEVILLE — Arkansas won’t be around for the final day of competition at the NCAA Women’s Golf Championships at The Blessings, but the Razorbacks certainly left their imprint on the event.

Arkansas senior Maria Fassi was the individual medalist in stroke play competition and part of a team that made it to the quarterfinals of the event.

She was one of four seniors on the squad along with Kaylee Benton, Dylan Kim and Cara Gorlei, who was an alternate for the NCAA Tournament.

“This team is fantastic,” Arkansas coach Shauna Taylor said. “They’re an awesome group of nine young women who has definitely changed the face of our program, four seniors who talk about leaving their mark.… they left their forever mark on Arkansas golf today.”

Fassi, who returned for her senior season instead of turning pro after last season, agreed with that sentiment.

Arkansas led 2-1 before a match flip at the end gave Wake Forest the win and a berth in the semifinals against Auburn, which upset Texas.

Arizona and Duke are the other semifinalists. The semifinal round will begin Wednesday at 7 a.m.

“We fell a little short of our goal, but I’m extremely proud of the fight we showed out there,” Fassi said.

Fassi, who defeated Wake's Vanessa Knecht 2&1, admitted she was a little tired in Tuesday's match play after winning the NCAA individual championship Monday.

“This morning wasn’t how I wished I felt,” Fassi said. “I was a little tired and I had a hard time going to sleep last night. I tried to warm up and after four holes they pulled us off the golf course.

“I had to wait a little bit and had a slow start, but I was excited that I was able to come through and get a point for the team.”

She was especially impressed with Razorback freshmen Brooke Matthews, who won 1-up over Wake Forest freshman Letizi Bagnoli with a birdie on the final hole. Matthews and Bagnoli went back-and-forth during their match. Bagnoli had a hole-in-one on next-to-last hole.

“You don’t see that very often, and she has that drive that’s hard to find. I was telling her how proud of her I am. I can tell she’s going to be a great player and an amazing person and I was lucky to be part of a team with her.

“You don’t see that very often with seniors or juniors or anything. Seeing her react that way under so much pressure as a freshman tells you what kind of player she is, what kind of person she is. She’s got great things ahead and I can’t wait to see all the things she accomplishes.”

Matthews, a former Rogers High School standout, finished undefeated in match play this season thanks to the help of a great approach shot from 88 yards away that set up the short birdie attempt on the final hole.

“That was pretty awesome, obviously, and it came at a great time,” Matthews said. “(Bagnoli’s ace) was an awesome shot and I just had to keep in mind that there was nothing about that, can’t really match that.

“I knew I just had to hit a great shot into this hole and that is what I did when I needed to do it.”