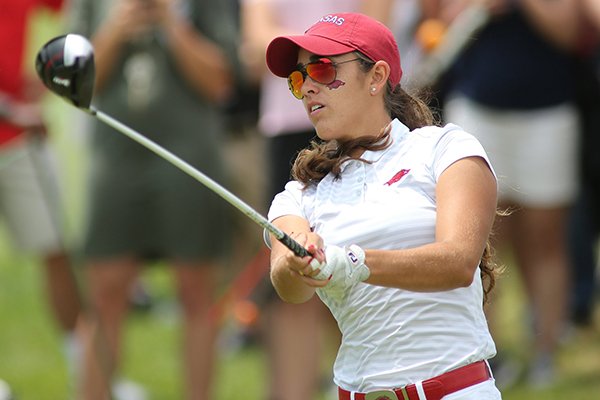 FAYETTEVILLE -- No. 2 Texas stormed the Blessings Golf Club on a rough scoring day that featured harsh weather to lay a strong claim to the top seed heading into match play at the NCAA women's golf championships.

The Longhorns were shooting a 6-under round when the horn blew about 8:15 p.m., signaling the golfers on the course to finish their hole and head to the clubhouse. Texas surged well past second-round leader and No. 3 Duke to position itself for the top seed.

The Longhorns had three players -- Hailee Cooper, Emilee Hoffman and Kaitlyn Papp -- in the clubhouse under par for the day, and Agathe Laisne at even par with two holes remaining when play was stopped.

Tournament officials said play would resume at 6:45 a.m. today, match-play pairings would be announced at 7:30 a.m., and the first matches would start at 8 a.m. on holes 1 and 10.

The home team No. 10 University of Arkansas, led by individual champion Maria Fassi, shot a 10-over 302 on Monday to earn the fourth seed at 24 over. Fassi had three birdies on the front nine to push past Florida's Sierra Brooks, and she completed her day with a 5-under 68. She wound up 8 under for the 54-hole tournament, four shots better than Brooks.

The teams endured a weather delay of 1 hour, 38 minutes in the middle of their rounds as well as windy conditions in round three of stroke play.

Texas was the only team to shoot under par on the day. Stroke play was shortened by one round because of storms on Saturday.

The top eight teams at the completion of stroke play will vie for the national championship the next two days on the difficult 6,397-yard layout on Clear Creek.

The only team in the top five not to qualify for match play was No. 5 Kent State, which had its best day at 5 over on Monday but finished the tournament at 54 over.

Arkansas earned its first berth in match play at the NCAAs in the five-year history of the format, which was adopted by the men in 2009.

"Obviously, our team goal is the most important goal," Arkansas Coach Shauna Taylor said. "Maria winning individually is just the cherry on top."

The Razorbacks look almost certain to face Wake Forest of the ACC, which shot up four places Monday with a 2 over par to reach fifth place. The Demon Deacons were led by Jennifer Kupcho, the 2018 NCAA individual champion, who fired a 1-under 72 on the day and is currently tied for 22nd place.

There's a chance Fassi and Kupcho, who battled it out at the inaugural Augusta National Women's Amateur last month in Augusta, Ga., could be paired in match play. Kupcho won that title in a head-to-head showdown.

Fassi said returning to school for her senior season, and deferring her LPGA status, was done with a championship run in mind.

"I've had a pretty nice couple of months," Fassi said. "Getting to be with the girls, getting to be with all our staff the last few months have been amazing. The LPGA is not going anywhere. It's been great. I cannot wait for match play tomorrow."

The current standings would pit Texas with current No. 8 seed Auburn. The No. 13 Tigers have a 14-over round going with two golfers left to finish this morning.

Duke, which had one golfer left on the course, is shooting 12 over for the round and 14 over for the tournament. If the standings hold, the Blue Devils would square off against No. 7 Stanford at 8 a.m. on the first tee. The Cardinal completed a 10-over round on Monday and are at 30 over for stroke play.

Defending champion Arizona carded a 14 over and dropped to sixth place at 28 over. The Wildcats would be matched up with Southern California in an all Pac-12 pairing on the No. 10 tee at 8 a.m. if the standings hold.

Auburn is holding the No. 8 spot at 38 over, three strokes better than Illinois, with two golfers left to complete three holes to finish the round.

Auburn, Wake Forest, Purdue and Illinois engaged in a spirited battle to secure the final spots, which won't be official until today. The Illini, at 41 over, might be the first team out of match play, while Florida, which carded an 11 over on Monday morning, is currently 10th at 42 over. No. 22 Purdue is still on the course with a 44 over in 11th place, while No. 9 Florida State completed its tournament with a 48 over and is in 12th place.