Tollett eager to catch on next season with Arkansas 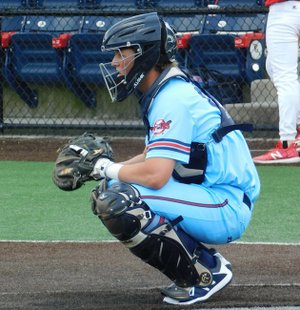 FAYETTEVILLE — Now that his senior season is over, Little Rock Christian catcher Cason Tollett can focus on his future at Arkansas.

Tollett (6-2, 215), an Arkansas signee who batted .450 with six home runs, 37 RBIs and finished with a whopping 36 walks this season, is thrilled about getting to his next destination.

“I am super excited to get up there,” Tollett said. “(Current Razorback) Casey Opitz is a great catcher and I can’t wait to get up there and learn from him and hopefully take over that spot for him when he leaves and just go out there and compete each game.”

He’ll be tuning in for Arkansas’ games at the SEC Tournament in Hoover, Ala., this week and for the NCAA Tournament likely beginning at Baum-Walker Stadium with hopes of a return trip to the College World Series in Omaha, Neb.

“They are doing good,” Tollett said. “I have been up for a couple of series and there is just no place like Baum. The fans are great, the atmosphere is great and they are doing a good job, which they always seem to do. I am just ready to be there.”

Tollett is just one member of a highly regarded 2019 recruiting class, which is ranked 11th nationally by Perfect Game with many players that have played summer baseball together with the Arkansas Sticks.

“I have played with most of them - I bet 90 percent of them,” Tollett said. “We already have a close bond because we have played together for a couple of years. I think that is good, getting to know your teammates and we have learned how to win together. I really feel like that is going to help us in the future.”

“They are all great arms and great kids,” Tollett said. “I think they will all make contributions right away.

“I’ve also played with (current Razorback freshmen) Connor Noland and Patrick Wicklander and Elijah Trust, who are all pitching up there now and they are all good guys that I am looking forward to playing with again.”

Tollett, who hit .513 with 7 home runs and 48 RBIs as a sophomore, is excited about playing for and learning from Arkansas coach Dave Van Horn and hitting coach Nate Thompson.

“I think I will bring just a solid defensive catcher first of all, controlling pitchers and being someone they love to throw to,” Tollett said. “I also think I can contribute with the bat. I think I am solid there, but I am always looking forward to getting better and know that will happen with Coach Thompson and Coach Van Horn.”

Tollett is likely to hear his name called in the Major League Baseball Draft in June, but has his mind set on being a Razorback.

“It’s a wait-and-see thing, but I have always wanted to be a Hog since I was a little kid,” Tollett said. “So it would have to really be something because I am set on college.”

Tollett was a key cog this year for Little Rock Christian, which saw its season ended in the semifinals of the Class 5A state tournament with a 2-0 loss to Benton.

It was their first year under new coach Brandon Eller.

“It was a really good season,” Tollett said. " Coming in with a new head coach, we knew we were going to be good and ended up 24-5 in unquestionably one of the toughest conferences in the state. Coach E did a super good job.”