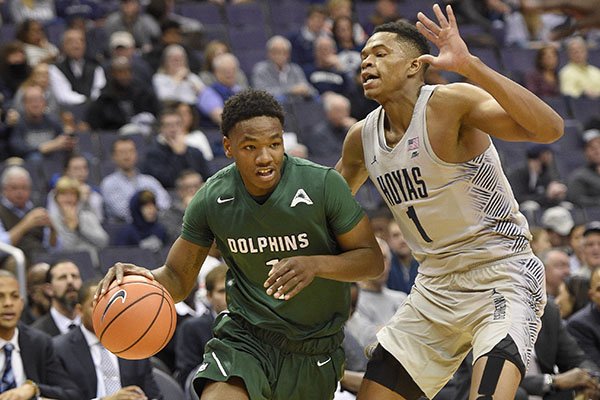 Razorbacks coach Eric Musselman showed interest in Notae while at Nevada. Musselman and staff won him over.

"Just the relationship with the coaches and the way I felt I was already family before I even committed," said Notae, who visited the Hogs on May 14-15.

He led the team in scoring and rebounding at 15.5 points and 6.2 rebounds as a sophomore to go with 3.4 assists and 1.6 steals per game. He hit 43 percent of his field goal attempts and shot 32 percent from 3-point range.

"I bring playmaking and scoring, but also defense," Notae said. "I can guard bigger people and I feel that I'm a good defensive rebounder."

Notae, who attended Newton High School in Covington, Ga., was named the Atlantic Sun Conference Freshman of the Year in 2018 after averaging 15.4 points, 4.7 rebounds and 1.8 steals, shooting 41 percent from the field and 40 percent beyond the 3-point line.

He attributes his ability to rebound to playing against his older brother and cousin as a youth.

"It just comes from getting roughed up by my older brother and cousin coming up. Nothing was easy," said Notae, whose cousin played football at Iowa State.

He is expected to sit out the 2019-20 season unless he requests and is granted a waiver from the NCAA.