Hogs in position for extended stay at home 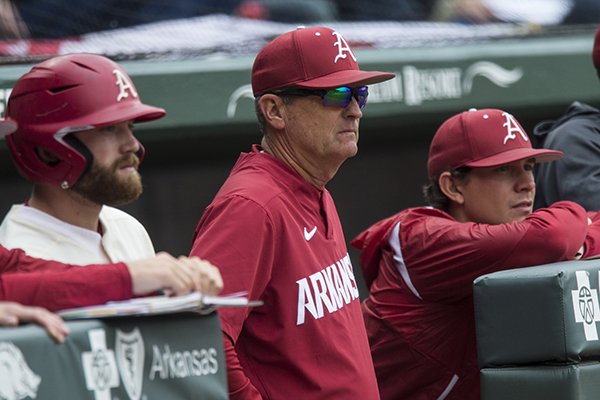 From the start of this college baseball season, fan expectations for the University of Arkansas mostly have been unrealistic.

Almost every mention the Hogs get on a radio show ends with them getting back in the championship series of the College World Series.

Dave Van Horn has done a masterful job this season, especially considering how much pitching he lost from last year. Finishing tied for the SEC West is almost amazing.

The league has 11 tgeams ranked in the top 35 in the RPI, and Vanderbilt, Arkansas, Mississippi State and Georgia all have a strong chance to play every NCAA game at home prior to the College World Series.

Everyone knows Arkansas should have won the national championship last year. Three mental errors on one play cost the Razorbacks a win over Oregon State, which finished tied for second in the Pac-12 this season.

To make it that far, a team needs leadership, team play, pitching, hitting and luck.

The best way to get luck is to make it happen with sharp play and good decision making.

The Razorbacks are good enough to win a regional and a super regional to become the OmaHogs again, but they have to have luck, too.

The UA doesn’t have to win the SEC Tournament that started Tuesday. In fact, one win should keep them in position be the HomeHogs for the next two weeks.

Whether the players were from Rose Bud, Valley View, Russellville, Pottsville or central Arkansas, every team and player that made it to Fayetteville will have a memory that lasts a lifetime.

Winning makes for a better memory, but just making it to the championship game means those players are winners, too, even if their season ends in a loss.

The biggest story of the baseball season was North Little Rock, which before spring break looked like it was going nowhere.

Then Randy Sandefur was told to take over as the head coach, and the first thing he did was start adjusting attitudes. On Monday, in 10 innings, the Charging Wildcats downed an outstanding Springdale Har-Ber squad 5-4 to win the Class 6A championship with a 15-18 record.

There were lots of great stories in softball, such as the showdown between Quitman and Poyen. Quitman won 3-2 on a strikeout with the bases loaded.

In soccer, Harrison’s girls beat Pulaski Academy, who lost only two games all season. Harrison’s boys lost 2-1 to Valley View in Class 4A.

Perhaps the biggest story was the Central Arkansas Christian girls winning their fourth consecutive state title with a victory over Harding Academy. That’s a dynasty. Claire Vest was named MVP.

The CAC boys also won by beating a talented Green Forest team 4-0 on four goals by Blake Smith, but the Mustangs defense was outstanding, led by Hayden Young and goalkeeper Brandon Bishop. In four state tournament games, the Mustangs allowed one goal.

Arkansas has always been a football state first and basketball second, which probably will never change, but there are hundreds of kids playing other sports that are important to them.

That’s why the Arkansas Democrat-Gazette will honor more than 400 high school athletes and coaches at its annual All-Arkansas Preps banquet June 15 at the Statehouse Convention Center.

It is a night of celebrating high school athletes and their coaches. The guest speaker is Los Angeles Chargers tight end Hunter Henry. Tickets can be purchased at www.AllArkansasPreps.com or call (501) 378-3807.