SEC BASEBALL TOURNAMENT NO. 5 ARKANSAS VS. NO. 23 MISSISSIPPI:

Opitz catches on to theft attempts 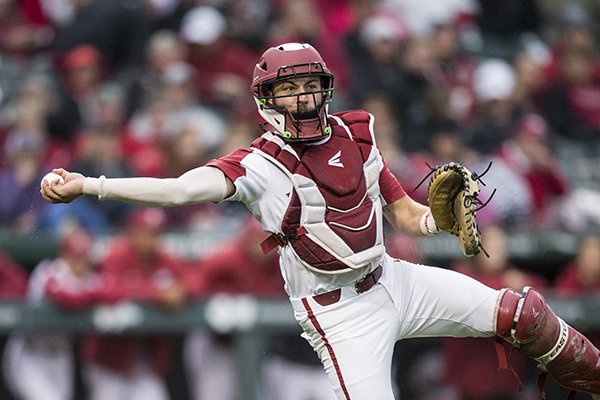 Arkansas catcher Casey Opitz throws toward first base during a game against LSU on Thursday, May 9, 2019, at Baum-Walker Stadium in Fayetteville.

HOOVER, Ala. — The University of Arkansas baseball team is tied for seventh in SEC games in stolen-base attempts by its opponents, but ranks first in runners caught stealing.

How does that add up?

Opitz, a sophomore from Centennial, Colo., who is in his first season as Arkansas’ starting catcher, has thrown out 14 of 30 would-be base stealers in conference play going into the No. 5 Razorbacks’ SEC Tournament opener today at Hoover Metropolitan Stadium. The Razorbacks will play Mississippi around 1 p.m. Central.

The Razorbacks have gotten outs on 15 of 31 steal attempts in SEC games thanks to a pickoff by pitcher Isaiah Campbell.

Georgia’s SEC opponents also have 31 stolen-base attempts with the Bulldogs throwing out 12 to rank fourth in the conference.

“Pitching to Casey is just unreal, unbelievable, that’s all I can say,” said Campbell, a junior who is Arkansas’ No. 1 starter with a 10-1 record. “He calls a really good game, and he knows how to work well with everybody on the pitching staff, what works well for us.

“At the same time, he’s throwing guys out left and right. He’s throwing out guys when we’re throwing pitches in the dirt. You think they’re going to be safe by five steps, but they’re out by five steps.”

For the full season, Opitz has thrown out 19 of 40 attempted base stealers for an SEC-leading 47.5%.

“Defensively, Casey is about as good as it gets to be honest with you,” Razorbacks Coach Dave Van Horn said. “If you watch him play every day, you just kind of go, ‘Wow!’

“Don’t try to run on him. He will throw you out. He doesn’t have a super, super strong arm as far as velocity, but he has incredible feet and a very good release, and he’s very accurate.”

Opitz ranks 14th nationally in percentage of runners thrown out on stolen-base attempts, but his 19 putouts are first among catchers who play in Power Five conferences.

“He throws the ball on the bag for the most part,” Van Horn said. “Very rarely does he throw it off one way or the other.

“It may be a little high or maybe even skip down there, but it’s usually straight on the bag, and the infielder can make a play.”

The first two weeks of the SEC season, Opitz threw out 4 of 5 on stolen-base attempts against Missouri and Alabama.

“I guess when Casey got his chance to start this year, runners in the SEC thought, ‘He’s the new guy and we’re just going to run on him,’ ” Arkansas shortstop Casey Martin said. “Then he kind of shut that down real quick.”

Kentucky apparently wasn’t paying attention because in the eighth conference series of the season the Wildcats attempted to steal seven bases against the Razorbacks. Opitz threw them out five times.

In Arkansas’ regular-season finale last weekend at Texas A&M, the Aggies attempted to steal just once with Opitz throwing out Cam Blake.

“It’s been a strong suit of my game all year,” Opitz said of controlling the opponent’s running game. “But I’m not going to get too caught up in the numbers.

“Having this success, I just need to keep my head on my shoulders, keep working hard, keep doing what I’m doing.”

Matt Hobbs, Wake Forest’s pitching coach the previous four seasons before taking the same position at Arkansas in November, said that after not being with the Razorbacks during fall practice, Opitz has helped him make a quick transition to a new group of pitchers.

“Casey’s probably the best catcher I’ve ever had a chance to work with,” Hobbs said. “He was probably ready for this whenever the opportunity came his way.

“He’s the kind of guy you could have thrown in as a freshman, and I think he would have been fine.”

Opitz was Arkansas’ backup catcher last season when junior Grant Koch — a fifth-round draft pick by the Pittsburgh Pirates — started 62 of 69 games and was voted by coaches to the SEC All-Defensive team while helping the Razorbacks reach the College World Series.

“Having a good catcher can make or break a team,” Arkansas closer Matt Cronin said. “Luckily for us, Casey stepped in right after Grant, so we’ve had two really good defensive catchers back to back.”

Opitz has allowed two passed balls — a low among catchers nationally who have played in 40 or more games — and he leads the SEC with four pickoffs. He has four errors and a .991 fielding percentage.

But it was Ole Miss junior Cooper Johnson, rather than Opitz, who was voted the catcher on the SEC’s All-Defensive team.

Johnson has thrown out 17 of 38 base runners attempting to steal (44.7%). He also has six passed balls and six errors for a .987 fielding percentage.

“Ole Miss’ catcher has got a tremendous arm, so a lot of people maybe were going off that,” Van Horn said. “But Casey’s defensive skills are second to none.”

Opitz is batting .257 with 2 home runs and 25 RBI, but he had game-winning hits against Missouri and Tennessee. In Arkansas’ 14-4 victory over LSU on May 9, he hit a two-run home run in the second inning to give the Razorbacks the lead for good at 3-2.

“Casey has done miracles for us this year on defense and offense,” Martin said. “That dude’s baseball IQ is just through the roof.

“He’s a great leader behind the plate. What we’d do without him, I honestly don’t know.”

Opitz credits the pitchers for helping him throw out so many runners by not allowing them to get good jumps off first base.

“Our guys are veterans now,” Opitz said. “They know what to do with a runner on first. Coach Hobbs has been great with them all year, coaching them through that. They’re unbelievable at it.

“They do all the little things right. Mixing up when they’re throwing the ball in different counts. Slide steps.”

Van Horn and Hobbs allow Opitz to call most of the pitches.

“He has a real good feel for what hitters are thinking, where they’re standing on the plate,” Van Horn said. “We give him some options as far as calling pitches. We ask him what he sees.”

Hobbs said Opitz sits in when the coaches watch video of opposing hitters and takes part in scouting report meetings.

“Casey has a really good feel for what our pitching staff is capable of doing,” Hobbs said. “He has a good feel for how the game is going in terms of what other offenses are trying to do to attack our pitchers.

“You don’t have to worry about anything with Casey back there. He’s got a good handle on the whole thing.”

Opitz at a glance

HEIGHT/WEIGHT 5-11, 175 HOMETOWN Centennial, Colo. HIGH SCHOOL Heritage NOTEWORTHY Has thrown out 47.5% of base runners attempting to steal this season to lead the SEC. … Has 2 passed balls — the fewest nationally among catchers who have played 40 or more games — and 4 errors for a .991 field percentage. … Batting .257 with 2 home runs and 25 RBI. … As a freshman, backed up Grant Koch and played in 19 games, including 7 starts. … Threw out 6 of 13 would-be base stealers last season.