SEC BASEBALL TOURNAMENT NO. 5 ARKANSAS VS. NO. 23 MISSISSIPPI: 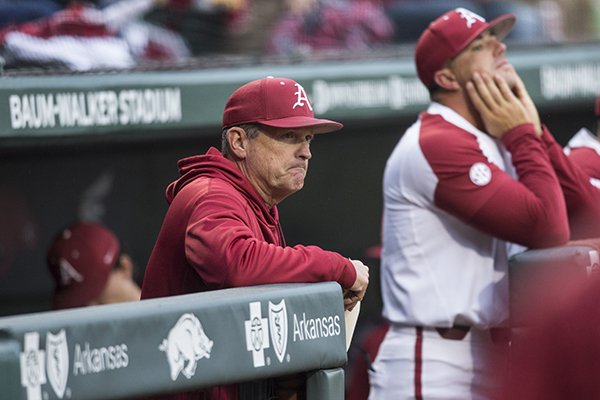 Arkansas coach Dave Van Horn watches from the dugout during a game against LSU on Thursday, May 9, 2019, in Fayetteville.

Van Horn also wants to make sure his No. 5 Razorbacks are rested and ready for NCAA Tournament play that begins the weekend after.

Trying to accomplish both goals is a challenge.

"I think everybody here wants to win that trophy," Van Horn said. "But at the same time, you don't want to jeopardize what you're trying to do over the next couple of weeks."

"Any time you're playing and you get out on the field, your competitiveness takes over," Van Horn said of the motivation to win the SEC Tournament. "You want to win the games.

"It's such a fine line of not overdoing it with pitching, No. 1, and you've got to take care of your catchers in the heat of the day as well as your other players. There's a lot that goes into it, and it takes time to recover. So you've got to be smart about it. We're going to do the best we can to monitor all that and play well.

"If we get to play on Sunday [in the championship game], that would be great. If we don't, we'll be OK as long as we play well and nobody gets hurt."

While Arkansas had a first-round bye, the Rebels advanced to meet the Razorbacks by beating Missouri 2-1 on Tuesday to eliminate the Tigers.

The Rebels are 9-3 against the Razorbacks since 2016, and they won 2 of 3 games at Baum-Walker Stadium this season. They were the only road team to win a series at Arkansas.

"We definitely want another chance at them," Arkansas shortstop Casey Martin said. "I think the outcome might be a little bit different this time, because we're a little more put together.

"It's later in the season. We know what it takes to win and we grind."

"He's got good stuff," Van Horn said. "He got off to a bad start at A&M and just didn't throw the ball over the plate as much as he normally does. He got behind hitters, and they got in hitters' counts, and that's when they hit him."

Zack Phillips, a junior left-hander from Texarkana, will start for Ole Miss today.

Both Wicklander and Phillips (4-2, 4.76 ERA) had short relief appearances when the Rebels beat the Razorbacks 10-5 earlier this season. Wicklander went one-third of an inning and allowed 2 earned runs, 2 hits and 2 walks on 26 pitches. Phillips allowed 1 earned run, 2 hits and 1 walk in two-thirds of an inning.

Van Horn said Arkansas junior right-hander Isaiah Campbell (10-1, 2.55 ERA) will start either Thursday or Friday so he can go on normal rest after going six innings Thursday at Texas A&M and holding the Aggies to 6 hits, 1 earned run and 1 walk with 6 strikeouts.

"He'll definitely throw Thursday or Friday, lining him up for the next weekend," Van Horn said. "He'll be on a pitch count. All the pitchers will be."

Junior closer Matt Cronin said the Razorbacks are excited about the SEC Tournament.

"If we could win the tournament that would be awesome, but we don't want to mess up our rotation going into regionals. We don't want any guys getting hurt."

Van Horn said he has no doubt Arkansas will be a top 16 national seed and host a regional, but he's not sure the Razorbacks will be a top 8 seed and in line to host a super regional if they don't win at least one SEC Tournament game.

"As far as a top 8 seed, I have no idea where we're at right now in the [selection] committee's eyes," Van Horn said. "I think we've got a really good opportunity. Because win or lose, our [national power ranking] is going to stay pretty close to the same, and our strength of schedule will get better.

"So I think we have a chance to be a top 8 seed, but we're just going to go play and try to win. Hopefully, we can go win a few games and make it easy for the committee."

WHERE Hoover Metropolitan Stadium, Hoover, Ala.

SHORT HOPS The Arkansas-Ole Miss game will start 30 minutes after the Georgia- Texas A&M game, which starts at 9:30 a.m. … The Razorbacks and Rebels are meeting in the SEC Tournament for the first time since 2014 when Arkansas won 2-1 and 8-7. … Ole Miss was the only visiting team to win a series at Arkansas this season. The Rebels took 2 of 3 games at Baum-Walker Stadium. … Arkansas went 20-10 in SEC play and shared the West title with Mississippi State. Ole Miss went 16-14. … The Arkansas-Ole Miss loser will play an elimination game at 9:30 a.m. Thursday. The winner will play around 4:30 p.m. Thursday.

NOTE All games televised on SEC Network, except the championship game, which will air on ESPN2.

GAME 6 Arkansas vs. Mississippi, 30 minutes after completion of Game 5