State of the Hogs: Blessings impresses new batch of golfers 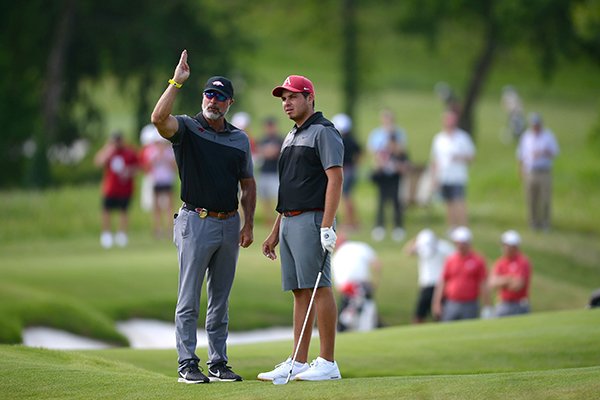 Arkansas men's golf coach Brad McMakin (left) and Julian Perico speak Friday, May 24, 2019, on the fifth fairway during the first day of play in the Men's NCAA Golf Championships at Blessings Golf Club in Fayetteville.

FAYETTEVILLE — The reviews are in at just past the halfway point of the NCAA’s two-week stay at Blessings Golf Club for the Division I men’s and women’s championships.

There is nothing anyone will say bad at about the way the golf course played other than it’s difficult. That’s the way it should be for a championship.

If there was need for a “thumbs up” from anyone it came Friday from the toughest critic around in college golf over the last 40 years.

Oklahoma State’s Mike Holder is the only Division I athletics director to come from the golf ranks. He coached men’s golf at OSU for 32 seasons. The Cowboys won eight national crowns under his direction. He has been OSU’s AD since 2005.

As a golf writer covering the Oklahoma scene at the Tulsa World, there were many interviews with Holder. Plain and simple, he did not hold punches, but always spoke in simple truths.

So it was time to get the true reading on Blessings as the top-ranked and defending national champ Cowboys were about to leave the practice range for the first tee. Had Holder been around the course?

“Yes, it’s great,” Holder said. “Mr. John Tyson did a wonderful job here. You can’t fake (your play) around it.”

There were some other brief “catching up” comments that bridged our 30-year gap between our job changes, then a little more golf talk. I inquired about Matt Wolff’s unique swing, then Viktor Hovland’s ability. Those are the two OSU stars dominating the world amateur scene. Hovland was the low amateur at this year’s Masters.

Holder dodged any real discussion, only pronouncing them “the best two players here by far.” 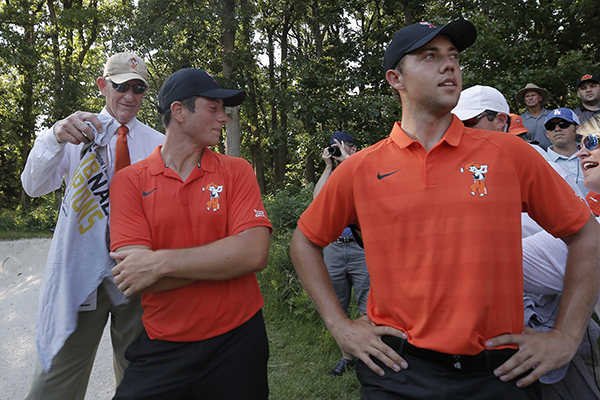 Julian Perico, the lone Arkansas entry, looked like he belonged with Hovland and Wolff with his opening 1-under 71. Perico had it 3 under early, and was 2 under before three-putting the 18th from 80 feet.

Perico disputed Holder’s assertion that Hovland and Wolff are the class of the field.

“It’s all five OSU players,” Perico said. “They are all great. I’d put Auburn’s Jovan Rebula in there with them, too.”

UA coach Brad McMakin praised Perico, too. McMakin took the blame for the bogey at the 18th, talking him into too much club from the fairway bunker.

“But I think what you saw was fantastic for a freshman,” McMakin said.

In fact, McMakin said Perico is “the best freshman” in his coaching career.

“It’s not even close,” he said. “He’s got every shot with every club. He can turn it any way you want, low or high. That’s with the driver, with a long iron. He’s got them all.”

That’s incredible shot making with the long clubs for such a young age.

“I know he was nervous today, but he controlled it all day,” McMakin said. “He’s an emotional player. But, he controlled it and was in play all day. And, this place right now is the toughest it’s been since I’ve been coach here.”

Tyson smiled when told of Holder’s remarks. They’ve been conducting a conversation to avoid what might become “an Omaha-like” stranglehold on college golf. Arizona State is hosting the next three NCAA Division I championships.

“Some say (the NCAA) wants it to be like college baseball, in the same place,” Tyson said. “Coach Holder and I have talked maybe three times of late about it being a rotation in four different regions of the country, and staying on those courses. That’s what we think should happen. That would be what’s best for the players.

“Of course, we’d like to be in that rotation here. I do appreciate his kind words about (Blessings).”

McMakin, like Tyson, is biased where Blessings is concerned.

“I just think it’s so hard, but that’s the way it should be for this tournament,” he said. “The good teams want it like this. It’s in championship condition. Tough courses separate the field.

“I think you are going to see some teams struggle here. But, you can come back the next day and make up ground if you are a good team.

“I felt the same way last year when we played at Karsten Creek (at OSU). It was the same type place. The good teams came to the top and that’s what I think will happen here, too.”

“I didn’t like that I left some things out there today – a couple of three putts,” he said. “But I was in two places that if you looked at it, I was probably not going to two putt.

“If you would have told me I could have signed for 71 before I started, I would have taken that. I’m frustrated to have left some out there, but I will take that.”

As it stands, he’s in similar shape as Maria Fassi was through one round. Fassi shot an even 73 before catching fire to give Arkansas its second women’s medalist crown. Perico is trying to join R.H. Sikes, the 1963 champion, as the second on the men’s side.

“If he shoots three more 71s, he will be right there,” McMakin said. “This course is playing that hard. The greens are running probably 12 on the Simpmeter, but with some of the slopes, that’s like 14.”

Interestingly, Sikes was with Tyson for a tour of the course late Friday afternoon. The Springdale residents both seemed excited.

Perico would like nothing more than to join Fassi. They sometimes played together this past year at Blessings.

“Yes, and she beat all of our guys - every one of them,” McMakin said. “I’m telling you, Maria is the best girl golfer on the planet.”

Perico paused when asked if Fassi won their personal matches.

“Well, some,” he said. “She played her tees. We played ours. But, it’s like two different golf courses. Some of the holes from her tees, they are much harder than the men’s tees.”

There’s a good perspective: nothing is ever easy at Blessings. The good players like it.