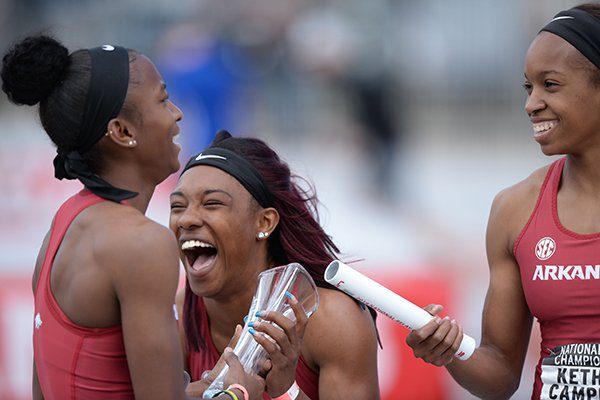 The University of Arkansas advanced six athletes to the Outdoor Track and Field Championships on the second day of the West Prelims at Hornet Stadium in Sacramento, Calif.

Along with two athletes who qualified Thursday, the Razorbacks have a total of eight athletes so far who have advanced. Arkansas has an entry in every event tonight.

Razorbacks pole vaulters Tori Hoggard, Lexi Jacobus and Desiree Freier all clinched spots in the championships after each cleared the bar with leaps of 14-2.

Kethlin Campbell will compete for an NCAA title after she clocked a time of 51.85, winning her heat in the 400 meters.

Devin Clark will return to the NCAA Championships in the steeplechase, earning her spot with a lifetime-best performance that stands as the No. 2 mark in program history. Clark finished with a time of 9:48.35 that was almost a full second better than her personal record.

Werner, who figures to be a key for Arkansas’ No. 1-ranked team’s national title hopes in Austin, Texas, ran 33:40.81 to finish fourth.

The top-12 individual finishers in each event advance to the NCAA meet.

“Taylor just kind of cruised along,” Razorbacks women’s Coach Lance Harter said. “The philosophy is to get one of those top 12 tickets that all go to the same place. They don’t discriminate if you’re 12th or you’re fourth or first.”

Harter said Werner took the lead for the first 2 miles because the pace was so slow.

“She just forced everybody to run her race,” Harter said. “Then because she’s coming to run in the 5,000 [Saturday night], we just wanted to make sure that we made it as effortless as we possibly could.”

Fifth-year senior Erich Sullins finished fifth in the hammer with a throw of 219 feet, 7 inches to become the first Razorback ever to advance to the NCAA meet in that event.

“It’s good to break the ceiling on an event like that for us,” Bucknam said. “But what I’m thrilled about is here’s a kid that’s put in over five years of work.

“Erich came here as a walk-on, and now he’s going to the NCAA Championships. It’s just a feel-good story for us.”

Arkansas sophomore G’Auna Edwards went 20-13/4 on her first long jump attempt and finished 10th to advance to the NCAA meet.

Smith finished fifth in the 100 meters in 11.22, a personal-best and the second-fastest time in program history.