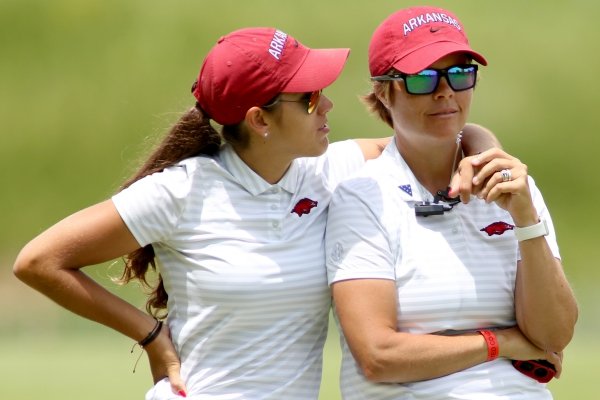 University of Arkansas' Maria Fassi (left) Monday, May 20, 2019, with head coach Shauna Taylor on the first fairway during the NCAA women's golf championship Monday the Blessings Golf Club in Johnson.

She always will as long as she plays the game.

But for this year's tournament, June 28-30 at the Pinnacle in Rogers, the queen requires a throne fitting two.

For in her final tournament as a Razorback, Maria Fassi, became a queen in her own right.

It completed a 211 8-under par victory by four strokes over Florida runner-up Sierra Brooks at the NCAA Women’s Tournament hosted by the UA at The Blessings Golf Club.

“Stacy Lewis helped put our program on the map, and Maria Fassi puts an exclamation on that,” Taylor said. “Maria has been a great teammate and great leader for us, and I’m just really proud to be able to walk down the fairway with her.”

Great as Lewis and Fassi were, they had Arkansas great predecessors. And in Lewis’ case, great successors.

A marvelous Razorbacks run for seniors Fassi, Benton and Kim, but now they move on.

Taylor won’t have to search hard for the next leader.

Rookie Matthews played veteran in her first NCAA Tournament, especially in match play. She rallied on the back nine to defeat Wake Forest’s Letizia Bagnoli 1-up.

“I’m so proud of Brooke Matthews,” Taylor said. “She was three down at one time. Brooke never lost in match play this season. You can never count her out.”

The departing queen counts on Matthews carrying on.

“I know she’s going to be a great player, and I was very lucky to be part of a team with her,” Fassi said. “I can’t wait to see all the things she accomplishes.”